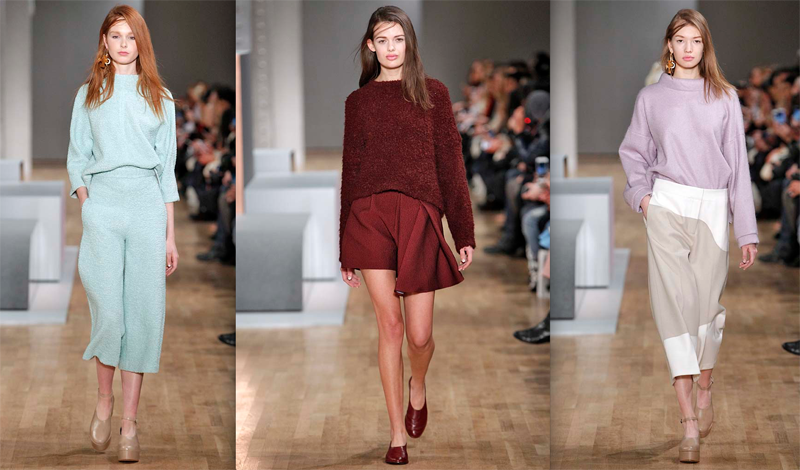 Inuit chic? Yes, that’s what Tibi designer Amy Smilovic was going for for Fall, with a crisp, clean-lined take on coziness inspired by the Arctic, done in lots of nudes and arctic whites, dark neutrals (navy, chocolate, merlot), cut with icy hues like seafoam and lavender. Rich knits and tasteful bits of furriness softly accented the sharp, chic cuts Smilovic has down pat (we’re especially fond of those swingy, cape-like sleeve detailing on the show’s opening look, which resurfaced a few more times, and looks a whole lot like the coat-perched-on-the-shoulders look bloggers and eds don en masse in the front row…). Smilovic continued to experiment with swingy gauchos this season, along with other fun plays on proportion that still looked wearable for the non-mortals out there. Super-simple white flats, a couple styles of stacked ankle boots, and quirky mohair-trimmed styles rounded out the show selection. The quiet sophistication, obvious wearability, and chic choice in textures amounted to yet another Tibi collection we want to get in our closets ASAP. We’ll have to wait until July to snap up these looks, but on Monday, those super-chic earrings are available at ShopBazaar.com as well as Tibi.com. J’adore!