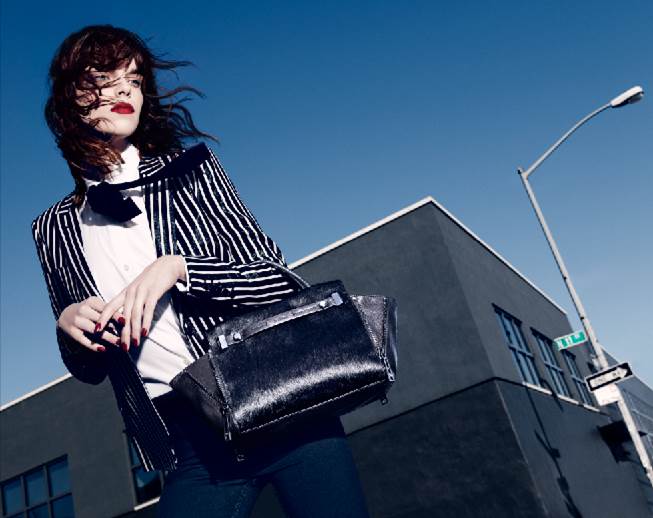 Monica Botkier is giving her namesake handbag line, Botkier, a major revamp thanks to new branding efforts that include a new website, the label’s first multi-channel advertising campaign for Fall 2014, a major design update, and new headquarters on 37th Street in midtown Manhattan. The brand will now be referred to as Botkier New York and has plans for a more aggressive presence in the accessories market. Monica Botkier founded the brand in 2003 and ran the company herself for a decade before finally being acquired by investor Tony Cheng, who serves as the brand’s president, in 2013. “It was definitely time to put some funding behind Botkier that would enable us to compete with the market in a strategic way,” said Botkier. “After being approached countless times over the years, Tony Cheng was just the right fit at the right time. I’m so proud of what Botkier is and what it will be!”

A glimpse of what the brand is becoming can be seen on their new site at Botkier.com, which features easier navigation that is clean and product focused with a heavy emphasis on social media sharing. Product shots from clients will be shared to the website via Instagram when they tag #botkier. Plus, there will be plenty of shots of street style stars carrying their favorite Botkier bag. The new site also includes a lifestyle blog entitled “Botkier Street”, generating editorial content, which has now become a bit of a requisite for most brands. Also to note: there will be shoppable video campaigns on the homepage.

As for the bags themselves, expect higher quality imported leathers like Brazilian deerksin, bubble lamb, goat skin, and other exotics along with new hardware. The Leroy satchel in deerskin is Botkier’s personal fave. So, what does that mean for the price tag? “Overall the prices embrace the true contemporary market and are sharper than they were were ranging from $198 to $398 for handbags,” said Botkier. “We now have more development and purchase power enabling Botkier to use premium materials without raising prices.” For holiday 2014, the line will be split into two tiers including the main collection mentioned above and a higher tier “Exclusives” collection, which will include more exotic skins like anaconda, which will retail for $598.

You can check out the bags in the brand’s first multi-channel ad campaign coming out this Fall, which was shot by Paola Kudacki in Williamsburg and features model Meghan Collison. Kudacki recently shot Beyoncé for the cover of Time magazine’s “100 Most Influential People” issue. Turns out, Monica Botkier was a fashion photographer before she was a designer, so creating her first campaign wasn’t much of a learning curve. “It was a flawless and exciting experience from branding to shoot to ad launch!” said Botkier. The brand tapped ad agency Gigante Vaz to create the look and feel of the brand’s new image. “The creative direction came straight out of our Botkier New York re-positioning strategy,” said Gigante Vaz partner, Paul Gigante. “We created a campaign that stayed true to Botkier’s girl—a street smart girl that’s chic and sophisticated—while elevating the brand image to capture that very New York essence, matching the overall elevation of the design and quality at Botkier New York. The idea was to be minimal but striking in our approach, and create a strong backdrop to showcase the innovation of the product.” The ads debuted in the September issues of Vogue and Vanity Fair, and will debut digitally in early September.