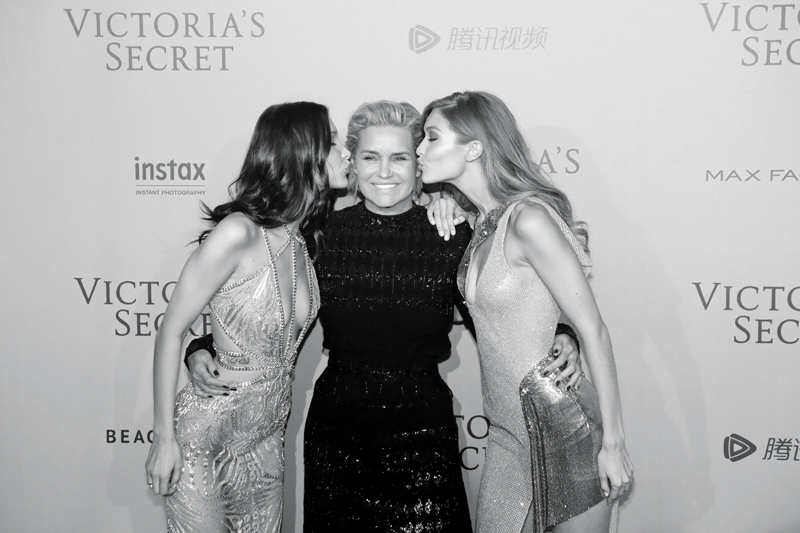 US models Bella Hadid (L) and Gigi Hadid (R) kiss their mother US-Dutch model Yolanda Hadid while posing during a photocall after the 2016 Victoria's Secret Fashion Show at the Grand Palais in Paris on November 30, 2016. / AFP / Patrick KOVARIK / RESTRICTED TO EDITORIAL USE (Photo credit should read PATRICK KOVARIK/AFP/Getty Images)

Yolanda Hadid was a beloved top model who graced magazine covers around the world, but beauty and popularity were not her only genetic gifts. As a devoted mother, she raised Gigi, Bella, and Anwar with lovely manners, admirable work ethics, and kind spirits, earning her FLA for Mom of the Year. Her latest project? Believe Me, a memoir that chronicles her struggle with Lyme disease, and a new television show that focuses on what it takes for both models and their mothers to be successful in the fashion world.

What’s the premise of your new TV show?
Model Moms—the working title—will show aspiring teenage models and their moms preparing for their journeys in the industry. The show will put both contestants and their mothers through an intensive eight-week training program, focused on the physical, mental, and emotional wellness that it takes to build a sustainable career.

What has motherhood meant to you?
It has meant completeness to me. Being a mother feels like the greatest accomplishment in my life. Motherhood is a glorious blessing and an everyday commitment that never ends. It’s not something you do sometimes. I am grateful that my children chose me to be their mommy when they came into this world, and I love the journey that has come with it. It’s a powerful feeling to be so deeply connected to another human being at all times. They inspire me every day, and teach me the meaning of unconditional love through all the seasons of life.

What kind of mom are you?
I am a protective Dutch momma bear and the anchor that keeps our family together. I have always strived to be the best that I can be and lead by example. My relationship with my children is based on consistency, trust, and loyalty. I have always tried to nurture and understand the uniqueness of each child. I don’t believe in having one parenting style that fits one for all. I learned early on that I had to adjust my mothering style to their individual needs.

And your mother…
She was a loving and devoted mother. My dad died in a car accident when I was 7, which was a huge shift in our lives, but my mom showed us how to persevere in this most difficult time of life. I had a humble upbringing, but my childhood memories from Holland are rich and happy.

What are your most important values?
Love, loyalty, and kindness are the core of our values. I raised my children to be conscious of others’ feelings and their surroundings. Entitlement is my biggest pet peeve, so it was important for me to teach my children humility. I actually drove the girls to downtown Los Angeles when they were only 4 and 5 years old to show them homeless people eating out of trash cans so that they would learn to understand the privileged world they were born into.

Were you strict?
No, but as a single mother of three, I needed to be disciplined about routines and responsibilities in order to keep all the balls in the air. I believe in clear boundaries and a lot of nurturing while guiding the children to their full potential and becoming the successful human beings they are meant to be.

How are your children different?
They are different yet they are fundamentally the same. Gigi is a copy of me in many ways. She’s very practical, hardworking, extremely loyal, and she likes a quiet life. She can set her emotions aside and have a clear perspective on things. That’s why she studied criminal psychology—her mind is brilliant. Bella was born with her eyes wide open. She’s a spiritual being with a gift that is almost hard to explain. When she was only 3 or 4 years old, she would pass by a homeless person on the street and walk straight over to kiss and hug them, with no barrier. It seems like she has been here many lifetimes before and came through me to be my mirror. Although he’s the youngest, Anwar is the one who holds the light in our family. He is our spiritual leader. When he was young, he would be digging in the dirt, looking for crystals while the girls spent their days horseback riding. People would ask why he wasn’t doing any sports, and although I did not know the answer, I knew intuitively that I needed to nurture his interests and not the norms of society. Today at 17, he still loves crystals, sacred geometry, and he is interested in how to heal the planet. He will be going to New York to study fashion design in the fall while continuing to develop his jewelry line.

For whom did you name your children?
When I was little, my mom gave me the nickname Gigi so I knew the name well. Gigi’s birth name is Jelena Noura. When I was pregnant, I met a little girl in Capri named Jelena, which I thought was the cutest name, so we gave it to her at birth but never really used it as she always felt more like Gigi. “Noura” means “light” in Arabic. Bella’s full name is Isabella Khair. I loved the name Isabella, but right at birth I started to call her Bella, and Khair is after my mother-in-law, which means “excellent” and “she knows.” Anwar Mohamed Gerard is named after his dad and both grandfathers on both sides. In Arabic, Anwar means “luminous.

Do you save all the girls’ magazine covers?
Yes, I do. I started a really cool wall in my apartment with framed covers, but it’s getting a little overwhelming, because there are a lot more than I had imagined, so I am running out of wall space. Although everything is digital these days, I’m hoping in 20 years from now, they’ll want to hang them in their own houses and eventually pass them on to their children.

How do you use Instagram?
If I had not gotten struck with Lyme disease and was mostly in bed for so many years, I probably would have never joined social media. I used to multitask a hundred things at once—always outdoors with my kids, in the barn, riding horses, etc. But once I got sick and isolated from the world, Gigi and Bella got me an iPhone, and installed Instagram and Twitter on my phone so that I could always see what they’re doing. It was life-changing for me, as it was often the only connection I had to the outside world.

What’s the premise of your new book?
The book is about my journey these past five years—the struggle to get diagnosed and my search for a cure for chronic Lyme disease. I fought my way to remission after seeing 106 doctors in 13 different countries. My intention is to educate and shine light on this silent killer that has become a worldwide epidemic.

Why did you title the book Believe Me?
Lyme patients fight severe invisible disabilities that are often misunderstood by their doctors, family, and friends. There’s a big stigma around Lyme disease. The first case was diagnosed in Lyme, Connecticut, some 40 years ago, yet we still don’t have a cure or proper diagnostics. I know the universe gave me this platform to bring awareness to an undeniable disease that is growing in the shadows. I have turned my mess into a message and am dedicated to finding a solution. This is a real disease—it kills people—so it is time to get educated. We must find a cure that’s affordable for all. It’s important—believe me.

How did you get better? What changed?
There are 14 chapters with answers to that question. Lyme is a multifaceted disease and, unfortunately, there is no cure. I’m finally close to remission after diligently working with Dr. Dietrich Klinghardt in Seattle for the past two years. I’m at 80 percent [recovery] today, and I’m determined to get to 100 percent soon.

How did you keep the faith during this ordeal?
I learned to trust the higher purpose of my journey. Once two of my children [Bella and Anwar] were also diagnosed with Lyme, I had no choice but to fight with all that I had. I was not going to leave this planet before I could find a cure and give my children a chance to the healthy lives they deserve to live. Hopefully, my legacy will be just that.

How are you feeling these days?
At 80 percent, I am the best I have been in five years, and I have so much gratitude for that, but I still have to live a thoughtful life and pace myself accordingly.

What inspired you to move from L.A. to New York?
My girls. I am looking forward to being based in the same city and setting up the support system they need while managing their busy lives. Anwar will be going to college in New York in the fall, so the timing is perfect. I will also be a lot closer to my family in Holland, so I am looking forward to being able to spend more time with my mom. 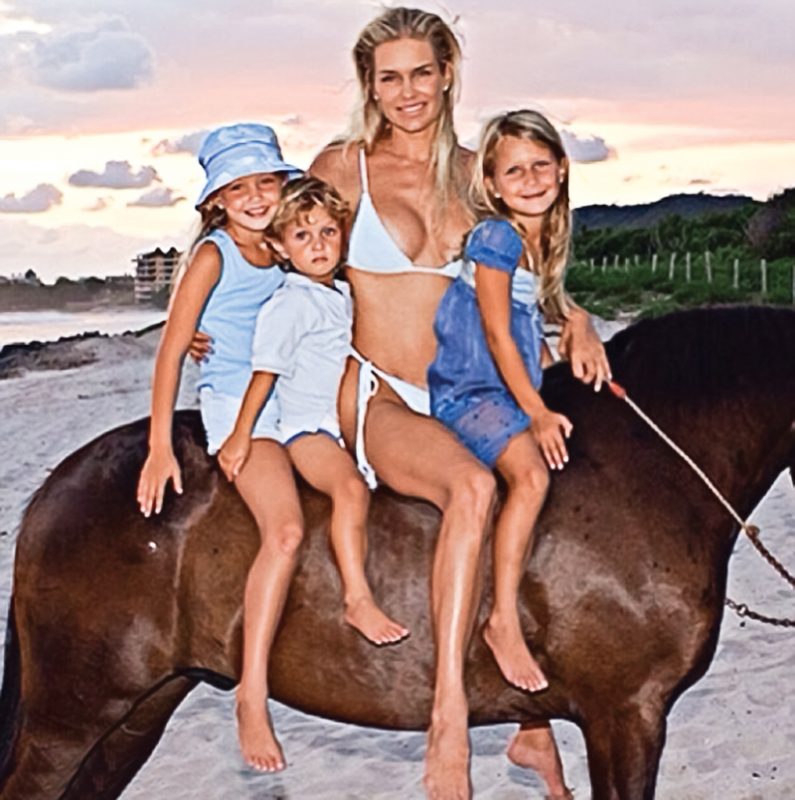