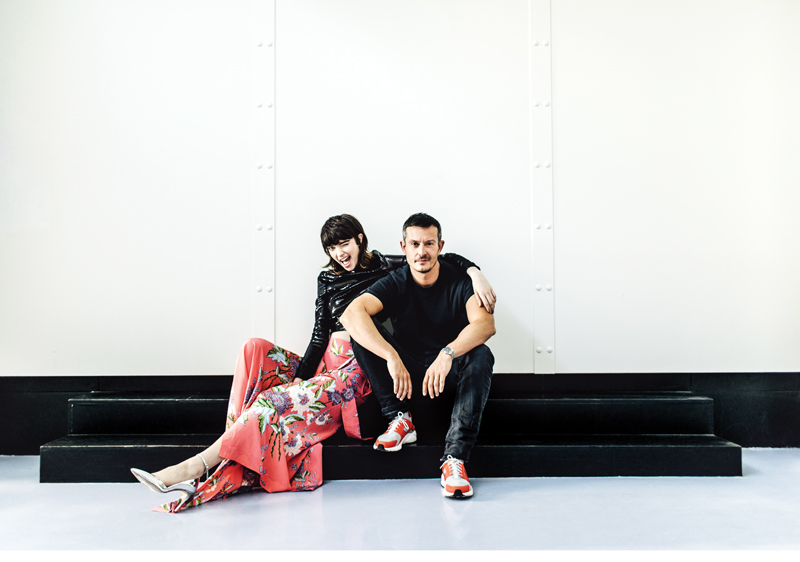 For the first time in Diane von Furstenberg’s 45-year history, the brand’s vision comes courtesy of someone other than its founder. In two short seasons, Jonathan Saunders (FLA Designer of the Year) has ensured that his work is dominating the conversation surrounding American fashion.

How’s life in the States after all those years in London?
The energy here is great—I’ve hit the ground running. I thought I was going to come here on a consultancy [basis], and I ended up never going home. The job of chief creative officer was exciting because it’s so broad. Working with a brand’s founder who is into newness and change has been a great opportunity.

What was your first conversation with Diane like?
I’d actually decided to make a real shift in my life. I’d been working for my brand, as well as many others. It was great, but I really wanted to try something different. I studied furniture before I did fashion, and I wanted, from a creative perspective, to do something that involved creating a product over a longer period of time. Then I got a call from Diane and met with her in London without any kind of preconception of what she wanted to discuss. I had no intention of moving to New York, that’s for sure! And then we started talking about the potential for the brand, and its future, and how it could move in a different direction. It was an incredible conversation. We talked about the relationship women have with DVF; we talked about colors, prints, what was happening in fashion, and how the preconceived brackets of brands are being rethought. Customers love pieces with personality and a point of view, rather than a sportswear-solution way of dressing. That’s why this brand has so much potential—it’s about imagination, print, color, and textile design, as well as sensuality, in an effortless way. I fell in the love with the idea.

You showed your first collection for Spring ’17 by appointment to a small group of editors. Why did you pursue that approach rather than a thousand-person show?
Primarily, it was to be able to see the clothes up close, and to talk about the collection in an environment that felt new. It has so much history here in New York, and I wanted to be respectful of that while discussing how I see Diane von Furstenberg moving forward.

When I was browsing the pre-sale on Moda Operandi, I was really surprised to see that you didn’t change the price structure. Why?
It was vital for me to work within the pricing architecture that had been very well thought out by the brand, but I did not want to compromise or approach the collection in any way other than a designer approach. Everything was done bespoke in-house—the pattern-cutting and draping were all done by myself and the creative team I brought in. Thanks to the company’s infrastructure, there is a wonderful team of executives within the production and development process that had incredible systems in place. And because I’ve had my own business, I’m very involved in making things happen, too. Everybody worked tirelessly to make sure the product stayed within the parameters of how it was structured but was elevated to a level that felt like there was such incredible value. It was a lot to do in three months—we developed an entire accessories line that worked in tandem with the collection, and you’ll see that developed even further in the next collection. We also broadened the depth of categories as well—knitwear is an important category for me. Rather than doing jazzed-up versions of wrap dresses, it was important to take the ideology behind that product—why it worked, why it felt effortless but was still designed with imagination, why it felt easy but still sensual—into the rest of the collection.

I’d completely sworn off wrap dresses until I saw the blue and black ribbed one in the boutique, and I thought, “I’m going to have to order that.”
[Laughs] I love it! We’re developing the store; it’s still in motion. There are loads of exciting ways we’re going to give our customer a more interactive and exciting experience. The worlds of brick-and-mortar, digital, and online can work in harmony, rather than be seen as something separate.

The collection in the store is very edited. How many deliveries are you doing now?
I still design four collections a year, split into 11 deliveries. Rather than approaching that as an afterthought, I think of this world, this collection, as an idea, an inspiration. Within the main stories, I tell other stories. When you go to a store, it feels like a new experience every month while still maintaining a synergy and a flow, so it looks like one idea.

You’ve made some very pronounced changes in the branding, especially losing “DVF,” for the most part, in favor of “Diane von Furstenberg.”
For the moment! [Laughs] It was a new chapter, and a new chapter is best defined by cleansing the palate. The customer wants direct, to-the-point messaging, and the new logo development is very simplistic, classic, and direct. The clothes are rich with color, pattern, and textile design; the environment that you put them in needs to feel warm and inviting. The branding needs to allow those clothes to do the talking. Simplicity is key.

How did Diane react to these changes?
She’s been incredibly supportive. She’s a good friend, an incredible woman. Her experience as an entrepreneur and businesswoman has fascinated me, and I can learn a lot from how she’s navigated through an ever-changing industry over the past 40-odd years. It takes a lot of maturity to be able to allow someone else to take control of the brand’s vision. It can only work when there is a straightforward, direct, open line of communication.

The critics loved Spring ’17; how are the clients responding?
I’ve been around most of America, speaking to our incredible wholesale partners, as well as going into our own stores, and speaking to the teams there about the vision for the brand. If people believe in it, it’s successful. I’ve never been nervous; I’ve never doubted it. When you have that kind of approach, people respond. When something feels fantastic to wear, but flattering, and still with a fashion point of view, but it doesn’t alienate people…

That’s signature DVF! So you’ve been in New York for about seven months now. You missed Brexit?
I did. I went back to vote against it!

And you came back to New York just in time for the ascent of Donald Trump!
[Laughs] It’s an interesting time. What I think is very, very encouraging is that despite what happens in politics, this makes people strong and convinced in their beliefs. Long-term, it creates a better world.

And that’s the classic DVF optimism right there! Are you’re living in the West Village?
Yes. My partner is here now, and my dog finally arrived, too. She’s in the latter part of her life, so she’s having her final chapter as an American. I love the energy here. I love how you can make things happen—people are open to new ideas all the time. Coming from Europe, the world of creativity is often paralleled with a traditional way of working, irrespective of how modern or forward-thinking fashion is. New York is a really great place to spearhead the future of fashion.

How much time are you spending in Los Angeles these days?
Not enough.

What appeals to you about the city?
The art scene and the appreciation for work/life balance.

What’s your idea of “the DVF woman” in the context of Hollywood?
I guess there’s a DVF woman in everyone, asking the best of themselves and expressing themselves through clothing.

Are you a movie and television guy? What kind of shows do you love?
Planet Earth II is my favorite at the moment, and House of Cards—never has it been more politically appropriate.