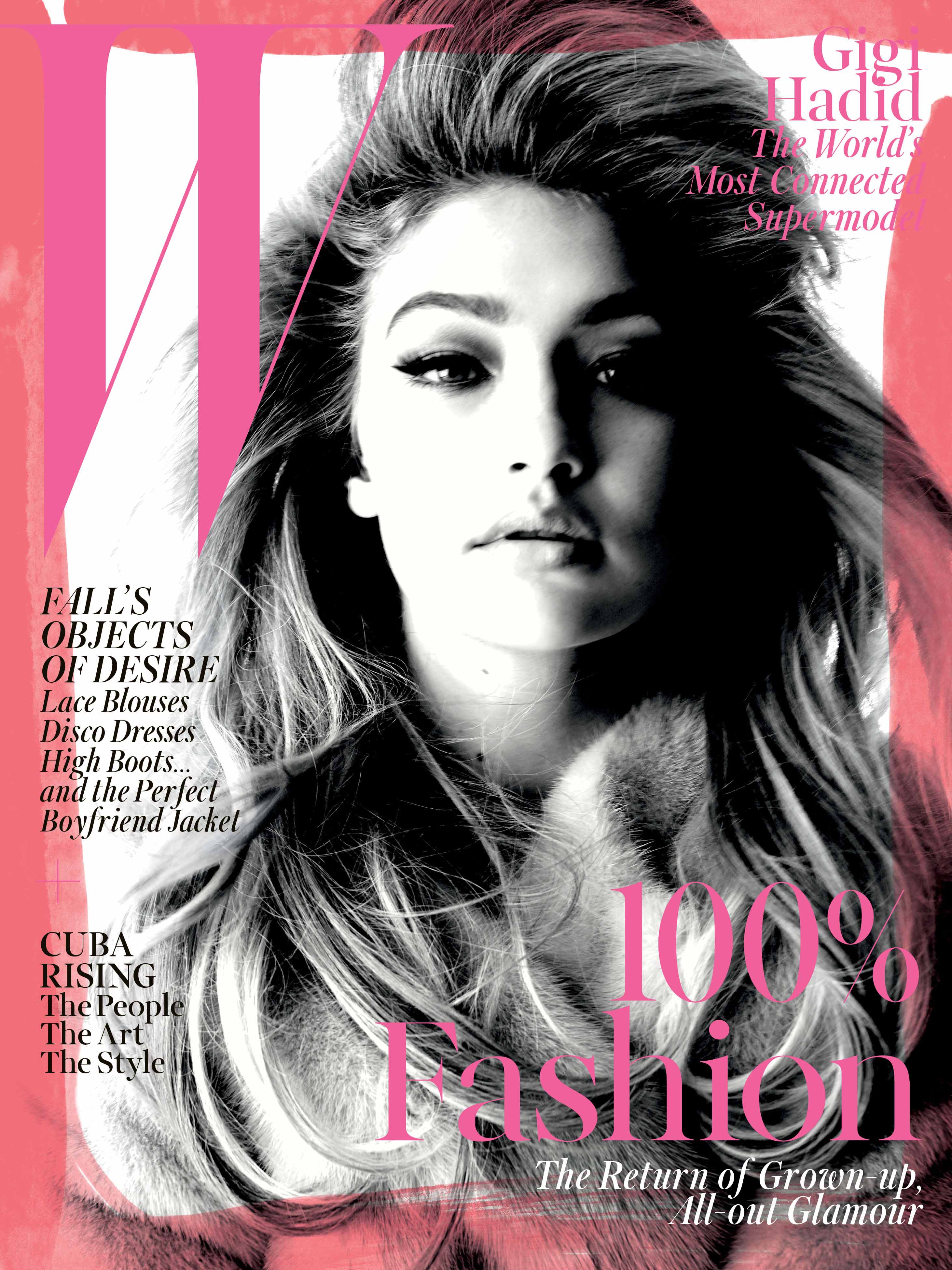 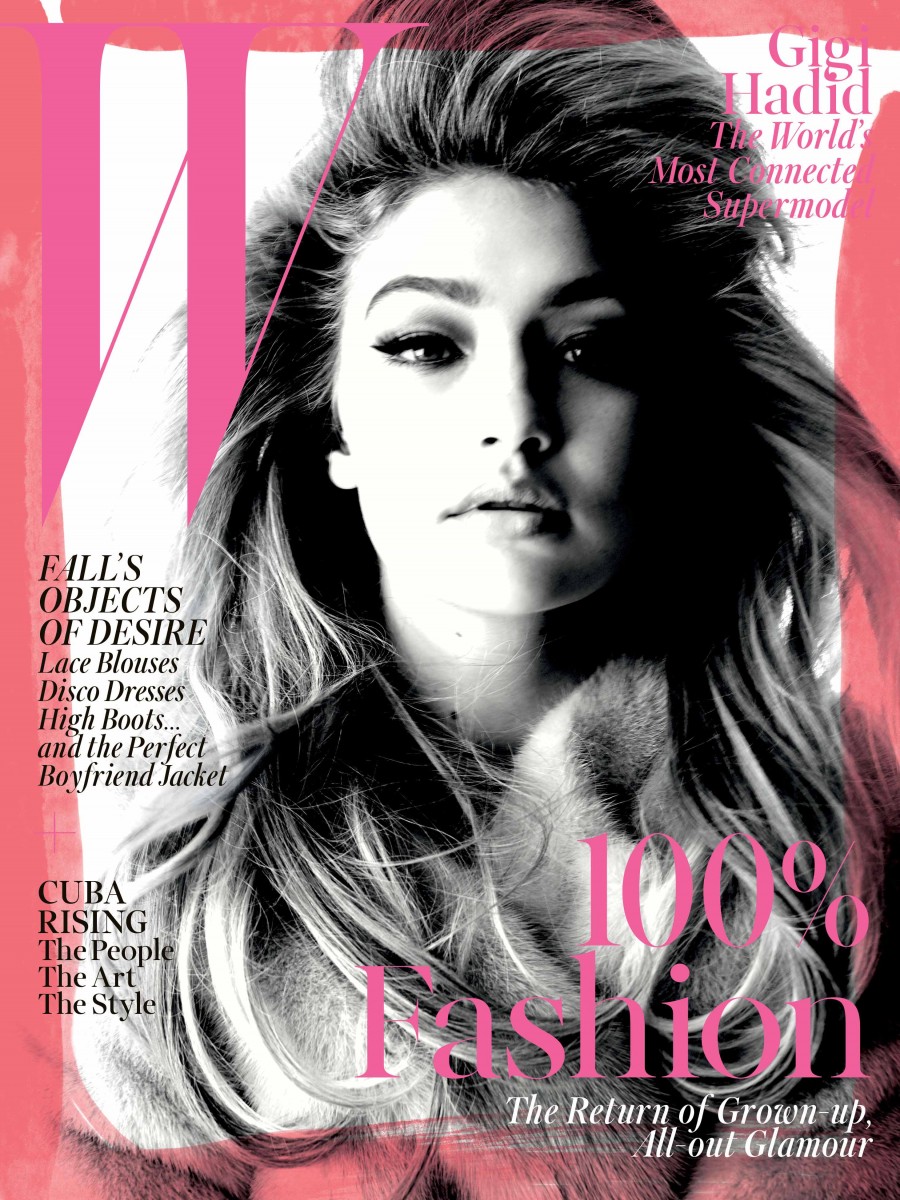 Gigi Hadid graces W magazine’s September cover with Steven Meisel and Edward Enninful working their magic together once again. Inside, Lynn Hirschberg discovered a new take on Gigi with her astute realization that the 20-year-old is connected to everyone from Streisand to Kobe Bryant to Harry Styles. Hirschberg, who we consider one of the best writers out there, tells The Daily how she linked it all together, and even chimes in on that recent Cara Delevigne television interview.

Who came up with the spin that it’s Gigi’s world?
I began to realize after doing a little research that she was connected to all these various people. Once I figured out that her stepfather was David Foster, it became clear that I could take it to enormous extremes and she could be connected to basically the planet.

It’s the new Kevin Bacon six degrees of separation game.
Much better, though. Kevin Bacon doesn’t go all the way to presidents.

How much did you know about Gigi before you started doing the research?
I knew very little. I knew who her mother was because we shot her for something else, but I didn’t put it together that Yolanda [Foster] was her mother until I started doing research. I often do all my best thinking when I walk my dog and people were staring at me because I was saying out loud that she’s basically connected to anyone you can think of. I was shocked that nobody had ever connected to her to people like Kendall Jenner, for instance. They are, in a weird way, sisters.

How so?
Her mother Yolanda is married to David Foster who was married to Linda Thompson. Linda was married and had children with Caitlyn Jenner. If you take it from there, Kendall and Brandon and Brody Jenner are half siblings. Through marriage, she and Kendall are sisters.

What’s the Obama and Gigi connection?
Her stepfather David produced a lot of top 10 and successful artists including Barbra Streisand, and she was one of Obama’s biggest fundraisers in Los Angeles. Not to mention the fact that if you go down the Linda Thompson road, Brandon Jenner is married to Leah Felder Jenner and her father is Don Felder from the Eagles and they’re connected to David Geffen and he’s the reason why Obama basically won, because he threw his support to Obama over Hillary [Clinton].

You drew a chart to figure this out. Where did you start?
I started with Gigi. She’s number one on the chart. It took me two days to do it, because after awhile, I could have connected her to you. I can connect her to the world. It became very fun to see how far you could take it. I became terrified that someone would figure this out, because I was surprised that no one had linked her to anybody, especially Caitlyn. That’s really close.

What did you think Gigi was going to be like?
I’m from Los Angeles and she’s very much like the girls I went to high school with. I’m obviously older than she is, but once you’re in high school, you remember that very vividly. She was a nicer version of the volleyball girls that went to my high school. I was fascinated that the last time there was a top model from California it was Cheryl Tiegs. What interested me about Gigi, and to some degree Kendall, is that they’ve reversed the process of what it is to be a top model now. It used to be that the brand made you, but now they’re there to help the brand because they have so many followers on social media. They’re the first group who are doing the brands service, rather than the brand inventing them. She was aware of it and very smart with it. She has very good manners. What you know about her from interviewing her is that she was brought up very well. Her mother did a good job. She’s extremely polite, she has a sense of humor, and she’s a worker. I like a worker.

Can you think of anybody else who has come up this quickly in the modeling world?
Cara Delevingne. We gave her her first cover in America. There’s been a long season of models that they’ve tried to turn into supermodels, but they didn’t have much personality. They may have been attractive and sexy and impressive to designers, but they didn’t have personality for the average person looking at them. Gigi and Cara have personality. They’re interesting people who happen to be models, rather than mannequins.

What did you think of the Sacramento newscasters who interviewed Cara recently?
Cara can do no wrong in my eyes. I love her. I thought they were incredibly rude. They called her Carla. They were a bad representation of America, to be honest. I felt bad for Cara because clearly she was on her four millionth interview and she couldn’t see them. She was in a studio, there was a delay, and she handled herself really well. She’s been true to herself throughout this entire thing, which impresses me. I’m a big fan of Cara. I  think she’s a proper actress. She’s really good in Paper Towns. I  also consider her a friend.

Getting back to Gigi… Where did you turn to research the story?
I turned to my brain. I didn’t look it up in any books. This is what I do and cover. In the course of doing this job, I’ve met a lot of these people. I wasn’t aware of her father, but I learned about him from Gigi herself.

Do you want go into interviews fresh?
It’s interesting to have the perspective of meeting a person for the first time. Having said that about Gigi, I had observed her in a lot of different situations. I was at your event [The Daily Front Row’s Fashion Media Awards] and I watched her host and that was informative. She said quite a few things about herself there. She was funny, poised. I was very impressed with that event and thought you guys did a great job, because it had a freshness. Part of that was because we were all happy to be there. That event made me interested in her.

Is there anybody who you haven’t interviewed yet who you still want to talk to?
Tom Hardy. I’m kind of obsessed with him. He’s elusive and I almost had him. He’s very honest and an amazing actor.

Are you typically on set when the cover shoots happen?
I wasn’t on set for Gigi, but 90 percent of the time I am.

Why do you go on set?
You learn things. Part of my job and what we do at W has to do with visual storytelling, and it’s part of the process of what the magazine is. It makes a difference. I don’t get in the way. It’s also very interesting to see how these photographers work. It’s an education.

I really look forward to reading this article. Of course, living in L.A. it’s not hard to figure out lots of the players in this group, including the gorgeous Foster sisters but it will definitely be fun to see where ms. hershberg takes her theory. And to say that she was born with a platinum spoon in her mouth is an understatement which does not diminish that she is a natural to be a top model. If she is indeed grounded, Yolanda must be the reason.

Great piece, so good to hear someone expressing themselves with bold clarity. Will check out the magazine.