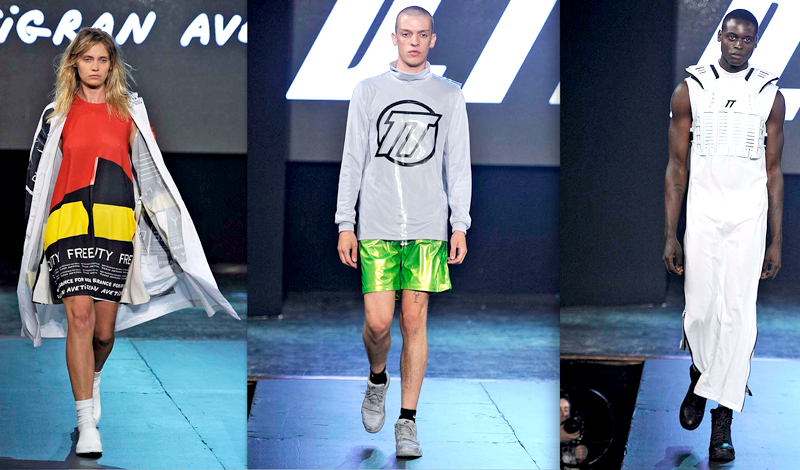 The VFiles show is an increasingly hot fashion week ticket thanks to the hype and atmosphere surrounding the shows. The music is always electrifying, the fashion is avant-garde street, and the crowd is young (very young) and almost painfully hip. There’s always the feeling that you’re witnessing some fresh cultural happening. And it has been gaining some exposure for its chosen designers. Rihanna (thanks to her stylist Mel Ottenberg) has worn both former VFiles designers Melitta Baumeister and Hyein Seo, the latter of which she even wore on stage. This season’s young hopefuls included: Moscow-based designer Tigran Avestiyan, Parson’s grad HyeGin Hamm‘s eponymous label Hamm, St. Petersburg-born and London-based Dasha Selyanova of ZDDZ, and Tokyo-based designer Kazuma Detto of D.TT.K.

While the lighting and raised runway at the Webster Hall venue didn’t do much justice to presenting the clothing, there were as always some interesting ideas presented. Take for instance, Avestiyan, who is a recipient of an LVMH group scholarship, and his collection that drew inspiration from duty-free airport fragrances paired with white clogs and socks (perhaps VFiles very own white clog-clad casting agent, Preston Chaunsumlit was responsible for inspiring the shoe inspiration). Plus there was Hamm’s mix of traditional Korean Monk clothing styles that were done in very American 100 percent hand washed denim was quite a mix, ZDDZ’s logo-ed out sportswear that was at once reminiscent of DKNY and Aaliyah, and D.TT.K, which featured menswear items like a long white gown topped off with a white football protective breast plate and shirts featured buckled sports harnesses (the kind you might strap into on a zip line). If you’re looking for what’s happening in urban street wear, it can probably be found chez VFiles, where you can shop the collections of these newcomers right now.

LeBron James and Nike Team Up for...

Getting to Know Christen Mooney of Hood...