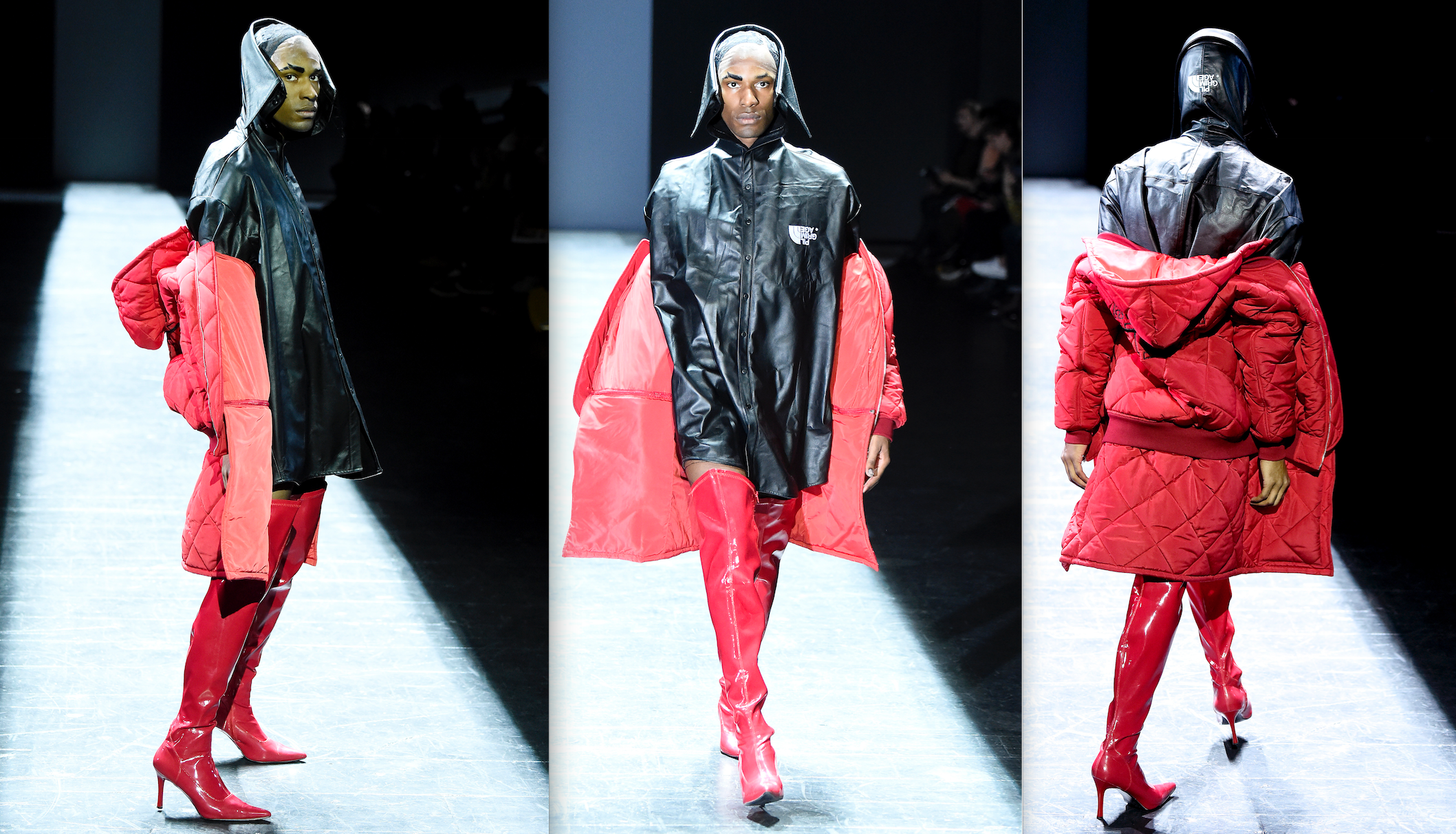 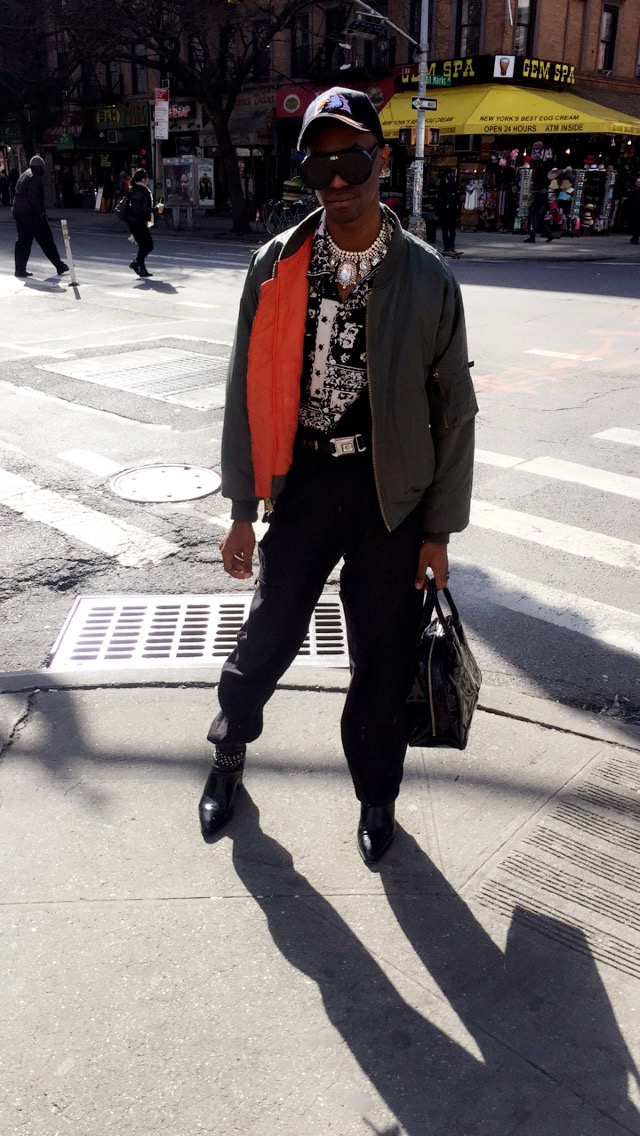 Since Hood By Air broke onto the scene in 2006, it has created a niche for a new subculture that doesn’t identify itself by gender, race or sexual orientation. Meant to be worn by “all of the above,” Hood By Air was one of the first brands to define streetwear as it exists in its modern iteration. Christen Mooney has been working with the label in various capacities since 2012, but this year he was thrust into the spotlight when he walked in HBA’s Fall 20116 NYFW show. Mooney, who has also worked with VFILES and Opening Ceremony, is a bit of a Renaissance man, having dipped his toes in everything from modeling to styling to DJing and serving as a brand ambassador-type for HBA. We caught up with Mooney for a dose of insider intel on working with arguably one of the hottest streetwear labels in the business, and to find out how he defines the culture behind the brand. BY LEILA BLAKE

What was the transition like going from HBA employee to model?
I was a fit model for the A$AP Rocky collection that was shown at Milk Studios back in 2012, when HBA had its first big runway show. That was such a recognizable show—everyone was there. I got started then, and there was a continuation of Shayne [Oliver] and I meeting up and being on the same wavelength. I always wanted to be involved in any way that I could, whether that was fit modeling, design concepts, or anything that Shayne needed. He kind of made a position for me. HBA needed someone to look good in the clothes, but also tell people about the clothes. We know what HBA is, but we feel like there’s a barrier to the world knowing what it is. What better way to communicate than walk on a runway? When walking for Shayne and everyone at HBA, it’s like a family. It’s like Shayne sending out his daughter to go kill the beast—we’re defending what is ours. I like to do the modeling, styling, and everything behind-the-scenes as well, so I get my fix with every part of the company.

What sparked your initial interest in the brand?
I’ve moved all over America, but I came to New York to attend LIM College. Coming to New York you don’t know who you are and you’re this person in a big new world. I was working at Opening Ceremony when I got to NYC and they did a shoot with Hood By Air. I remember seeing this crop top that was gray and pink and I immediately identified with it because I’m a gay male and I like to be sexy. What’s more sexy than a crop top T-shirt? There was something about it that wasn’t girly, gay, or queer. It was just like, I am in a T-shirt, it says Hood By Air, and it just happens to be a crop top.

Do you think modeling is the next direction you’ll take?
I go back and forth with this all the time. I don’t know if I want to take modeling that seriously because I’m smarter than that. Not to say models are stupid—it’s more me, personally. I want more for myself. So, modeling yes it’s cool, I love to do it, I would love to be in the spotlight in an outfit, but I want to be photographed for me. When people see me photographed I want it to say something and have a point of view. So that’s where I get turned off by modeling, but am I modeling in the future, of course.

What are some of the most popular HBA items?
I’d say the T-shirts, just because they’re iconic. There will be new and inspiring details rather than just a simple HBA T-shirt, so different silhouettes and things like that.

What are some of your personal favorite items?
When I was working at VFILES, which was one of the first companies that embraced Hood by Air, they had printed a pink poodle T-shirt and every time I wear that people notice it and talk about how it’s one of the OG, iconic HBA shirts. That’s my personal favorite.

What was your Fashion Week like?
I had just come back from Paris with HBA where we had a men’s show that was really low key. That show was actually more exhausting than New York Fashion Week, just because you are in a foreign place. I had no idea that I was walking the show until we did the light test the day of, and I wore my red patent leather boots. The HBA design team made the boots for the Paris show. Shayne wears these boots every day, but in black. During rehearsals, Shayne said that he wanted me to walk down the runway prideful, so that’s what I did, and he immediately told me to get dressed. The team literally made an outfit for me on the spot.

What was it like for you to walk in those boots?
Those boots, they’re red—they’re feisty and sassy. I’m a gay man and I can wear whatever I want. If I want to put on a red pair of heels I can and if I want to put on a pair of Timberland boots I can do that, too. It’s empowering to wear them. It’s cool, it’s fab, and it’s dope. It’s also really hard to find heels for men. They’re either really expensive or they just don’t make them, but I think men are ready for that.

So you just got back from Paris—were you there with the company or for modeling purposes?
I didn’t model while I was in Paris, probably because it was womenswear. You can walk womenswear if you’re a guy, but the chances are very slim, especially in Paris. I worked my ass off doing showroom appointments and I had to style for photo shoots. Paris for me is very peaceful and relaxing though, even when I’m working.

Who are some of your HBA muses?
The muses are the people who work there. We have people from all different backgrounds—it’s very eclectic, so you get a lot of different styles and aesthetics. I think when you are in that environment you get inspired naturally. I love when they wear HBA—I just think it looks so dope and it looks like how it’s intended to be worn. The other people who wear HBA, like the model Binx Walton, she wears the T-shirts and she wears it very much like a goth skater, which is cool. I would like to see the world in HBA.

You styled the new look book for HBA. Tell us about your creative process.
I’ve been styling for the e-commerce website, and I just started styling with them more heavily. It starts with me picking items that I think people need to see and comprehend because a lot of things are conceptual. These are things that Shayne has thought about for a while. It’s sad to say that those things aren’t being taught to the world in the way that we want them to, but that’s business. I like to challenge people to wear a coat with duffle bag sleeves. I would wear that in a heartbeat, but I’m not everyone, so I want to style it in a way that doesn’t seem so harsh. When you see some things on the HBA runway it’s like, “Oh my god, what is that?!” The runway is meant to be more of an impact statement. A look book is more refined—you can flip through it and see things differently. So that’s how I attack it, in a delicate way.

Do you see yourself moving up in the company?
I definitely want to be involved. I love Shayne and everyone who works there. They have known me since I was 18, and I’m 23 now. I could never see myself not working with them. I identify with the company, I love them, they are very dope and cool. However, I want to build an empire like HBA, so I’m really down with learning from a young black designer like Shayne.

How would you describe the HBA revolution?
It’s not so much a revolution, it’s more an evolution of the world. HBA is really about having fun. I don’t know how a guy could feel sexy in a suit when he could feel sexy in an HBA crop top—it’s showing off your abs, looking good. I want people to be a little less uptight. That is kind of what we are standing for—just being dope and being yourself. The whole underground thing that HBA is “known for” is not our revolution. That person who you are when you’re alone and jamming in your room to your favorite song, being that and taking that into the world, that’s really what HBA is.