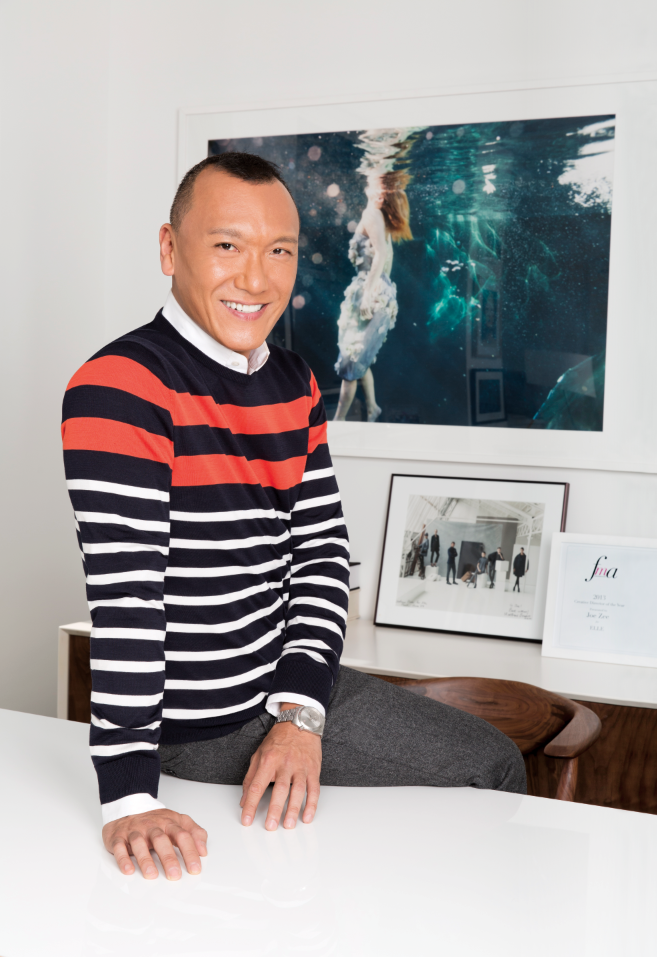 Joe Zee rocked and shocked the fashion world when he announced he was leaving his plum gig as ELLE’s creative director to join Team Marissa Mayer as EIC and executive creative officer of Yahoo Style. As the online magazine launches this week, all eyes are on Zee—and he’s perfectly okay with that.
BY EDDIE ROCHE

How were you approached for the job?
The week it happened, I was at a dinner telling friends how I had just read a profile of Marissa Mayer, and that I liked what she was doing. I mentioned that the tech world isn’t my world, but that she’s brazen in wanting to revolutionize it, and that I’m drawn to people who make quick and easy decisions. Three days later, someone from Yahoo left a message on my cell phone. I really thought it was a friend from dinner playing a joke on me. I don’t even think I called the person back, but a few days later they called back to follow up and that initiated things. At first, I didn’t know exactly what it was. They had to explain to me all the possibilities and the potential, because I’ve been a print guy for 25 years. As much as I love digital and social media, I had to think, What is this? What can it be? What was it? So I went to Silicon Valley and met with Marissa and her team, and they said I could do whatever I wanted. The resources are infinite; the ideas are limitless. Yahoo is one of the biggest tech companies in the world. It was a no-brainer. I didn’t want to leave ELLE or print, but I couldn’t say no.

What were your first impressions?
I’m obsessed with the whole culture. If you ever watch HBO’s Silicon Valley, it’s not that far removed. I can go there in my jeans and sweatshirt, which is kind of the real me! The first time I went there the receptionist said, “I know you—you’re an engineer here!”

Was your ELLE departure emotional?
Absolutely. I’ve changed major jobs three times in my career and every single time I had to leave when I didn’t want to. I’m a fast and firm believer that if you’re looking for something, you’re not going to find it. If you’re actively seeking a career change, it may never happen. It’s always the moment when you turn the corner and someone is looking and waving you down. In hindsight, the growth has been incredible for me, and I believe in this.

Any concerns about breaking the news to Robbie Meyers?
Oh, my gosh! Robbie, David Carey, Michael Clinton… I wasn’t nervous, I was sad. Robbie was my boss but also my friend. I wanted her advice as a friend. They wanted me to stay, but they understood why I wanted to leave.

What was your last day like?
We went to the rooftop of the Dream Hotel and drank and ate chicken wings. We stayed until the sun set, and Robbie stayed the whole time. It was so sweet to have almost eight years of camaraderie with these guys who I’ve laughed with, fought with, and traveled with. There was a lot of reminiscing. You think, God! We’ve really come far!

Did you take a break between ELLE and Yahoo?
I shot an Old Navy campaign in the weekend between—I’m not good with breaks. I’m a good busy bee.

What are we going to see at Yahoo Style?
It’s going to be a true reflection of me and what I am in the fashion world. I can absolutely sit here and talk runway, but also talk fashion on the street. How do you bring high-end and mass and have it live coherently? How do you marry those two things in a way that brings everybody to the party? Are we going to report on runway trends? Absolutely. Is it going to be tips on how to live day-to-day in the most beautifully stylish way? Absolutely. We want to be helpful, fun, and entertaining. I didn’t call it a digital magazine—Marissa did, and what she meant was not a tangible flip book, but something you get on an emotional level. What she loves is the imagery and the captivating stories, and all of that is going to exist. I want people to be dazzled and surprised every time they come to the site.

What are some of the other ways Yahoo Style will be like a magazine?
We’re going to be doing cover shoots. Every month will have an exclusive story with images. When I was at ELLE, I did a cover of Dakota Johnson. On Elle.com, it got a lot of views and comments, but when I went to Yahoo’s home page and the image was there, the same shot got thousands of comments in an hour. People were responsive to what they were seeing, and not even sure of where it came from. We’re going to partner with magazines and put up their content, too.

Who will be on the covers?
Celebrities, models, and tastemakers. The functionality on a newsstand is to sell magazines; my functionality will be to tell stories.

Is it easy to book talent for Yahoo Style?
I would like everything in life to be easy, but the demand for celebrity isn’t ever easy. Period. It doesn’t matter what platform or outlet you want to use them for. The power of Yahoo’s 800 million users is huge, but every publicist has their own strategy for their clients. Sometimes numbers come in handy, and sometimes they don’t.

It’s pretty unprecedented to book huge stars for an online magazine.
Yeah! We’re doing a lot of exclusive photo shoots and fashion stories, but this isn’t just about me being a magazine editor online. I don’t want my site to be populated only by still life and runway. We have to shoot everything with a point of view.

How did you put your team together?
We’ve brought on Sarah Cristobal, whom I’ve loved since she was at Style.com. Dora Fung is our market editor. She’s been at CR Fashion Book and many Vogue editions, and she knows her fashion. Bifen Xu, our special projects director, is from W. Nick Axelrod, a co-founder of Into the Gloss, will be a contributor. A really good friend of mine, Andrea Oliveri, has been booking the covers. I’m super excited about this group. I wake up and say, “These are my people?” I never take sole credit for what I do. It’s always about everybody. It’s a strong team with opinions, and they’re plugged-in and smart.

Will you still be sitting front row at shows?
If people will have me! I’ll be in New York, for sure. I’m going to London for Burberry and I’ll be at the tail end of Paris. Hedi Slimane is a friend, so I will absolutely be there to support him. My team will probably be in Europe. Fashion Week has turned into Fashion Month, and that was hard at a monthly magazine, but with a website, we’re updating daily. I’ve been to my fair share of Fashion Weeks and I will miss it, but in the initial phase, we’re figuring out how we can cover content and get it up.

You also have a plethora of side projects!
I’ve got TV projects coming up, and I’m Old Navy’s style ambassador this fall. I styled its entire campaign with [photographer] Dan Jackson. I also have Styled by Joe Zee on QVC, which I love. I’m also putting the finishing touches on my book, which is coming out next year.

You have so much energy, Joe! Is that from the free Red Bull in the Yahoo kitchen?
When I started, the girls here said, “Come to Yahoo, and you’ll get the freshman 15.” I hope not, but there are definitely a lot of snacks.