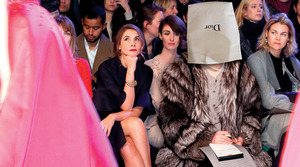 (NEW YORK) A NYFW print gem you might’ve missed amid the flurry of shows…The furs! The frocks! The lack of food! The Daily’s French Connection—a front-row regular who knows Paris cold—takes us behind the scenes at Couture.
BY EDDIE ROCHE

You’ve been taking clients to Paris for years now. What do most people ask you when you tell them you’d headed to Couture?
People are interested in the prices, obviously. They’re fascinated with how insanely expensive the clothes are. It’s the ultimate fantasy. You just can’t compare it to anything else. It’s the pinnacle.  What I find so ironic is that it’s the highest strata of fashion and at the same time so…amateur.

In what way?
How about the fact that the women start asking for prices before the shows are even over, which is just insane. In most cases, they haven’t even been established yet. Some of the houses are meticulous, but in general there’s a real laissez-faire aspect to it. Or maybe it’s just lazy. It’s a dying art for a reason. There isn’t a single go-getter in the entire business. It’s like the nearly dead are running the show.

How long have you been going?
For over 10 years. Every year all the papers run the same story that couture is still alive. You hear the same sh*t every time and then you go and it’s a 19th century experience with the customer service to match. These people have no clue what the hell they’re doing.

When’s the best time to go?
I’ll tell you the worst time. July in Paris is hideous and hot and you’re looking at fall clothes and sweating your ass off trying to look elegant. The whole process is so inconvenient and unaccommodating. Seating is always a mess and air conditioning is a special treat. At [REDACTED] you had to wait in line to get to your seat. I watched two of the world’s most important collectors storm off in frustration. They’ve had six months to get their s*** together, and they can’t even seat their own show properly. Every time I go I say it’s the last time I’m going to go, but then this past January was actually very pleasant.

Who are the women attending the shows?
There are a slew of American women who go. I have friends who love it and will buy big time. There’s a group who go every season because that’s just what they do. Some of them probably haven’t bought clothes in ten years. I don’t understand it. It’s like the biggest schlep on earth and some of them even drag their husbands.

What about the international crowd?
There’s a group of Lebanese women who really go to town, a few other Middle Easterners, and a lot of Russians. I didn’t see that many Chinese this time. It can be stressful, which is why a lot of wealthy women don’t go. Who wants to schlep back to Paris three times for fittings?

Are they friendly?
Oh, yes. We’re all in it together.

Do the ladies bring their lap dogs?
I haven’t seen any lap dogs, but there’s plenty of dead animals in the house. Cruella De Vil-type s***.

Are there bloggers?
Barely. Certainly if a Bryanboy or Aimee Song came they would be seated, but bloggers don’t really exist in that world. It’s not like New York. It’s the top-tier only. Anna, Glenda, Sarah, Suzy. A lot of magazines don’t send anybody.

Why do you think that is?
It’s so completely out of touch with reality. You’re looking at a dress and it’s $125,000. It’s insane. When Coco Chanel returned to designing couture, her prices were the equivalent of today’s Ready- to-Wear prices. Some of these guys must live on another planet.

Do you think couture shows will be around in 20 years?
As long as women want to get married in dresses no one else has, couture will survive.

Are the parties fun?
The Sidaction Charity Gala closes the week, and that’s sort of fun. It’s the big AIDS fundraiser, and all the designers go. But it’s not like you’re going to seven events a night like in New York.

Is there food?
There’s a lot of champagne floating about, but not much food, no.  It’s more of a fluid friendly time. But nobody goes to Couture to eat. You’re supposed to be hungry.

Are your clients generally happy to be there?
Oh, they’re thrilled. They’re all really rich and staying at the Bristol. What’s to be unhappy about?

But you still feel Couture needs work…
It’s a broken art form. It still has relevancy to a very, very, very small portion of the world, but it needs to get with the program. Forget the 21st century. I’d settle for the late ‘90s.

French Connection Is Bringing Back Its Iconic...