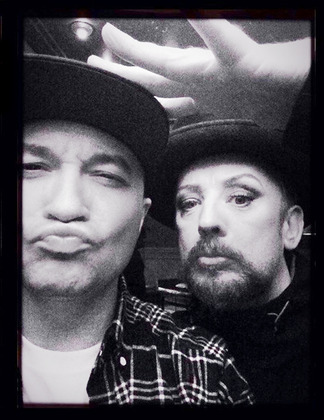 Need a little pep in your step this afternoon? It’s time for part deux of Sergio Kletnoy’s one-on-one with Boy George! Check out part one from Friday here, in case you missed it…

“The morning after our interview, Boy George unblocked me on Twitter and started following me. Now if only I could get him and Madonna in a room together to kiss and make-up… Boy George will be touring the U.S. this spring, his brand new album This Is What I Do, is out March 25, in the meantime you can get his stellar new single, ‘King Of Everything’ on iTunes.”

Your first real album in 18 years, This Is What I Do, is out on March 25th. Why now?
It’s been a while since I have veered away from technology! It’s a live band album—it’s kind of baggy, loose, organic, and sustainable, and all the other clichés. I was working on a covers project, and America wanted bonus tracks. I suddenly thought, ‘I need to write, I need to make my own record’. I’d done a little bit of writing with Culture Club, and I just didn’t feel that we found our mojo. I certainly hadn’t found mine. I decided to abandon the Culture Club idea for the time being, and do my own record. I didn’t want to sound hip. I didn’t want to sound like I was making a modern-sounding record.

This new album is very much a continuation of the Boy George “sound”.
Since I’ve been writing with Culture Club in the last couple of weeks, we’ve had a couple of questions about who should produce our record. It always feels like, oh what a great idea to get this one or that one, but I think that makes sense if you’re a contemporary, young artist and you’re out there competing with other contemporary artists. We don’t have to do that. It’s a bit like losing your hair. It’s kind of like having those pressures removed is quite nice, because you’re very clear about what you’re working with. I don’t know what it’s going to be like in America, I’m very excited about that.

Do you have fond memories of the ‘80s?
I really don’t think about it! I probably think more about the ‘70s because it was a time of huge adventure for me. When I think about the ‘80s, I just think about all the drama and pressure. I look back and think: “Oh, I wished I’d enjoyed it more”.

What’s your favorite Culture Club song?
The one we’ve just written, “Thank God For Strangers”. I really love it. It’s a gem! Historically? “Victims,” I suppose. It’s a song that I sing very differently now, and I’ve grown into it as a song. When I play it now, it’s more bluesy.

You were all about sex, drugs and rock ‘n’ roll! How do you feel when people say you broke barriers and are a fashion icon?
Well, I didn’t really. When you say sex, drugs and rock ‘n’ roll, you make it sound really glamorous. The thing I did really bad was being a drug addict. I failed miserably at it. Keith Richards appeared to have done it pretty successfully. In the beginning when I was in Culture club, we weren’t rock ‘n’ roll, we were more frock n roll. We were just being ourselves. When I was 22 years old, I was not thinking about my cultural impact on the world. I was full of my own self-importance. I was enjoying the madness of my career. I was thinking about myself. Now as an older man, of course I see my responsibility. Like the whole Madonna feminist thing—that was put on her. I don’t believe for a minute she was like, ‘I’m fighting the female cause’. A lot of people were calling Madonna a tough cookie. She was a tough female cookie. I don’t know if I’m a tough cookie. I have a tough coating, but I’m quite soft. I imagine Madonna firing people willy-nilly.

You underestimate how much you’ve done for your fans and your peers.
No I’m not—I’ve just always seen myself and Madonna as very different people. But similar, in some respects, because we were around at the same time. We trail-blazed a bit. I’ve always recognized that with her.