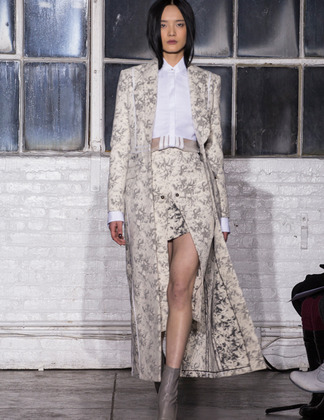 The catwalks of NYFW have wound down, and London’s calling. But as we cross the pond for the next spate of shows, take note of these talents that wowed us stateside…

Lie Sang Bong: He isn’t exactly a newcomer to the fashion scene, but it was Sang Bong’s first season showing Stateside. The designer, who has been showing during Paris Fashion Week since 2002, showed in New York for the first time this season. The designer said he’d been prepping the big move for five years. So why the big move? “The main reason why we are doing this is that we are opening up our flagship store this year so it’s going to show who Lie Sang Bong is and what the brand is about,” said Sang Bong. The collection this season was styled by über stylist Kate Young and was inspired by photographs of the Grand Prismatic Spring at Yellowstone National Park. “The volcanic eruptions and the lava coming out inspired all the colors I’ve used for the collection,” said Sang Bong. The mix of colors on sharp tailoring and outerwear resulted in spectacular pieces like a multicolored textured coat in a lambswool “tech fabric” that is printed, embroidered, and lined in black neoprene. Other standouts came in Sang Bong’s fox fur pieces, like a lush long vest worn over a long sleeve black leather top and black pants, or a black coat whose lapels revealed more of Sang Bong’s colorful patterns worn over a matching shirt and paired with a pencil skirt. It was a collection city-dwelling women will appreciate when Sang Bong opens his New York flagship.

Azede Jean-Pierre: Striking out on your own as a designer in your early 20s is no easy feat, but Haiti-born designer Azede Jean-Pierre, who happens to be an alum of Ralph Rucci and Ohne Titel, fearlessly debuted her first collection in February of 2012. She’s had no shortage of press since, in the pages of big-name glossies like ELLE and Glamour. Plus, she’s already been picked up by Moda Operandi and has gotten her chic designs on It girls like Solange Knowles, Hannah Bronfman, and Chelsea Leyland. From her Fall collection, it’s easy to see why these girls love her designs. Jean-Pierre’s mix of casually cool pieces like an oversize slouchy grey knit sweater worn over a simple grey slip dress or a burnt orange sleeveless turtleneck dress worn over matching pants had a certain sophisticated, but laidback confidence. For evening a shimmery copper pant suit or a black fur jacket worn with killer ribbed leather leggings had a subtle, but certainly not over sex appeal that cool downtown “it” girls will be clamoring for.

Brandon Sun: This season marked Brandon Sun’s first-ever runway show and he’s already landed coveted real estate on Style.com. The young furrier showed a collection sprinkled with fine details like little puffs of fur that covered a sheer hem of a dress like polka dots or the Swarovski crystals that decorated the length of a black fur coat. A stunning fur suit dress opened the show, and an inventive grey fur cape, hung off the shoulders from a leather halter neck, will surely be a first request for some style bloggers. But non-fur pieces showed Sun can spread his wings. To wit: a white, black, and blue leather striped dress, slit up the front and revealing hints of skin through black mesh, or a heather grey frock cut up to the hip to reveal a short layer of black satin and sheer chiffon worn over a striped leather blouse. Simply put, Sun’s runway debut was sizzling.