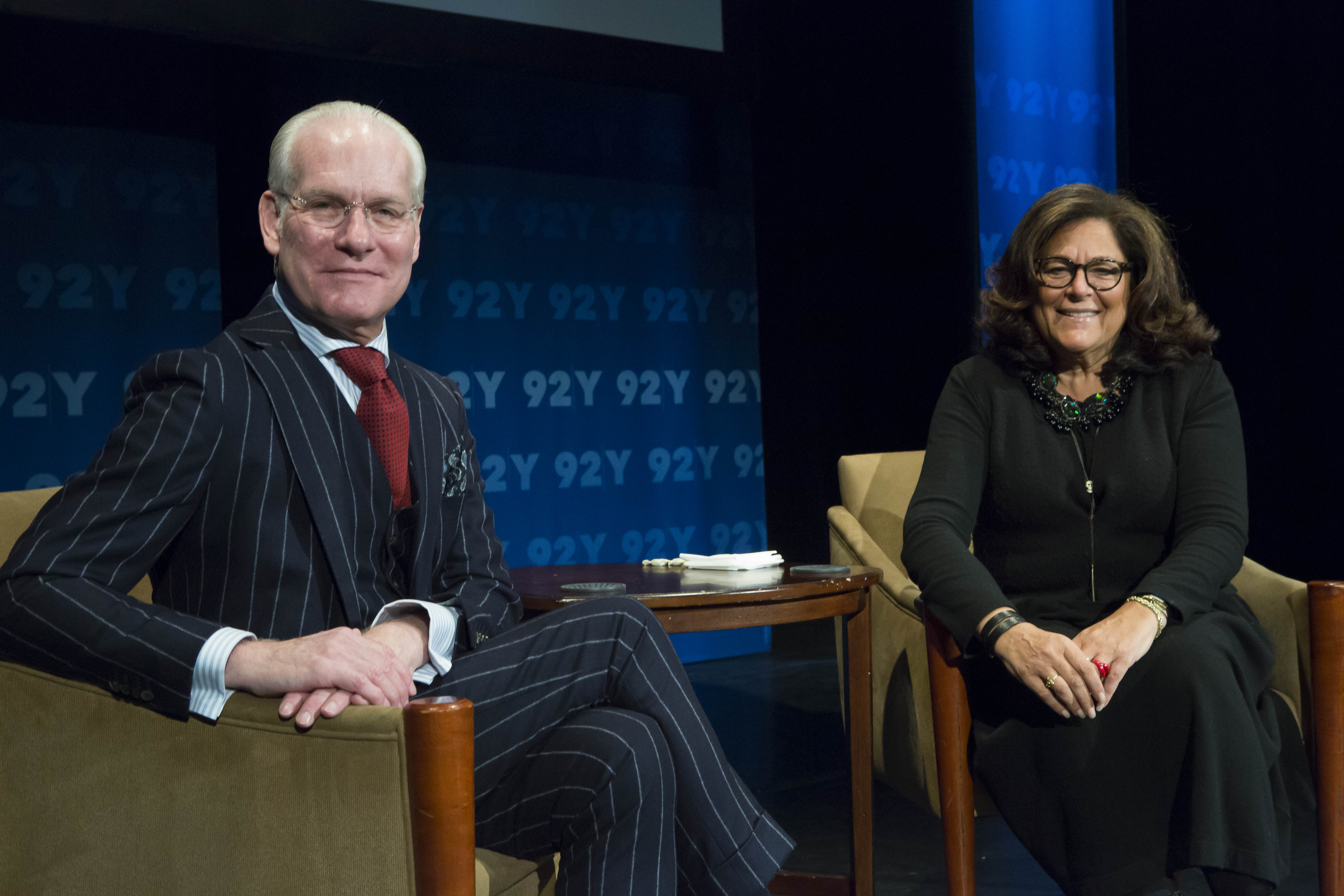 Last night,  fashion’s favorite mentor, Tim Gunn made a special appearance at the 92Y to get the Fern Mallis treatment, as part of her “Fashion Icons” series. Tim let the audience know that he was willing to dish about everything, warning: “I’m a truth teller, so you’ll hear a lot of truth tonight.” Gunn shared his thoughts and feelings about the fashion industry, moving to New York, and his fabulous life. Here are a few of the juiciest quotes that have helped him ‘make it work’…
BY ALMENDRA PEREZ

Thoughts on astrology: “I don’t follow astrology, but when I was in my early twenties, I was having somewhat of a crisis in terms of what I was going to do, where I was going to go, and who I would be. I went to a psychic and it was a quite profound experience.”

On being bullied: “Oh, I got so used to that. What was so interesting was that my big FBI agent macho father never once took me inside and said, ‘Let me show you how to fight back.’ The consequences were that my instincts just kicked in, so I was a great biter and hair puller.”

Gunn’s relationship with his father: “My father and I didn’t have the best relationship and a lot of it had to do with these tensions of why I didn’t play the piano and [why I played with] Barbies; there were just so many things. He was determined to help me with this whole sports culture. When I finally took a great deal of liking to swimming, he became the swimming coach. He wanted to be there for me and it was really touching.”

On coming out: “I never told my parents; I told my sister. She’s the only one in the family that knows. I mean my mother figured it out especially once Project Runway aired.”

On a few of his New York firsts: “My first apartment was half a block from Macy’s. It was crazy! In my admissions role [at Parsons], I needed a rental car. That first day I had to pull out in front of my apartment to get all of my catalogs to go to my first high school visit, I came out front and the car was gone.”

On retiring: “I don’t think I ever will, I’m quite afraid of it.”

Where he displays his Emmy award: “It’s in my kitchen and it sits next to my coffee maker, so I can see it every day.”

On his fave era in fashion: “There’s been nothing like the ’60s. In the ’60s we ushered in Mad Men and [ended with] hippies, and in between we had the mini-skirt, the clear vinyl dress, and the paper dress. I would love to see another revolution that really allows us to feel jolted and be fun.”

Celebrity crush, revealed: “It’s not romantic, but I would give anything to have a cup of coffee with Meryl Streep. But I’ve never met her.”

Gunn’s absolute favorite TV appearance: “They’ve all been really fun, but I will say it was very surreal to be on Sesame Street.”

His number-one rule: “Accept responsibilities for your actions.”

On his most memorable fashion moment: “I was asked by The New York Post, ‘What’s the one thing you’ve seen in fashion that you’ll never forget?’ I said without hesitating, ‘Oh that’s easy, it was watching Anna Wintour being carried down five flights of stairs at a fashion show.’”

Advice for people who want to change careers late in life: “Throw the dice, take risks. The more terrified you are, the more likely something fantastic is happening. Be terrified, it’s a good thing.”