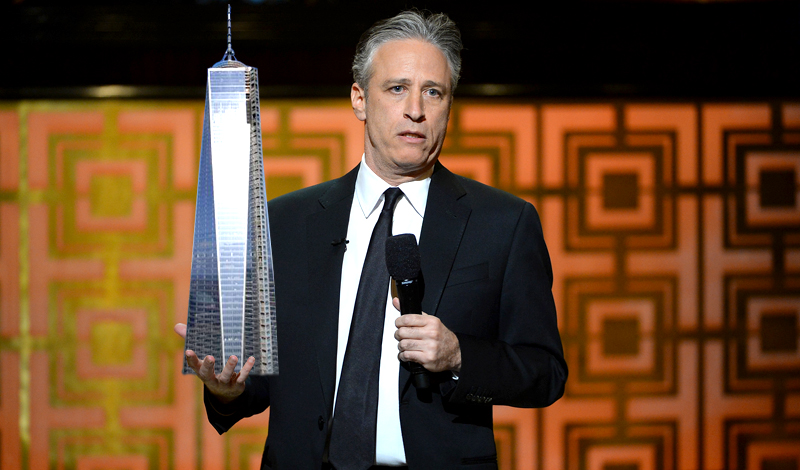 Topics of conversation among the front rows of Milan: Donatella’s supermodel revival, the upcoming layoffs at Condé, and Jon Stewart. That’s right—the comedian and Daily Show impresario is rumored to be in talks with Condé Nast about the top role at Vanity Fair, according to sources.

Stewart, 54, has been one of the buzziest fixtures in media since the 1990s, first with The Jon Stewart Show on MTV, followed by The Daily Show, which he joined in 1999. Known for his politics, satire, and general fearlessness, Stewart has been likened to a “modern-day equivalent of Edward R. Murrow.”

Upon announcing that he would leave The Daily Show in 2015, Stewart expressed a desire to continue writing and perhaps return to stand-up comedy or a part-time correspondent role on television. In 2017, he and his wife, Tracey, repurposed a 45-acre farm in New Jersey into an animal and education center. This summer, he took to the stage at Radio City Music Hall as a surprise performance during Dave Chappelle’s comedy show; he also guest-hosted an episode of ESPN’s SportsCenter.

Stewart at Vanity Fair would be an inspired choice. He has the journalistic cred, media savvy, and engaged following required to help transition Vanity Fair from a magazine-centric brand into a 360-degree media force. Imagine VFTV, for example. The one potential sticking point? Salary. As Condé Nast’s budgets continue to tighten and its top-earning editors exit the building, The Daily wonders if Stewart is a viable possibility. According to TV Guide’s 2013 survey of star salaries, he was the industry’s highest-paid late night host, raking in an estimated $25-30 million a year. We reached out to Vanity Fair and Condé Nast corporate for comment, but did not receive a response by press time. Watch this space for updates!