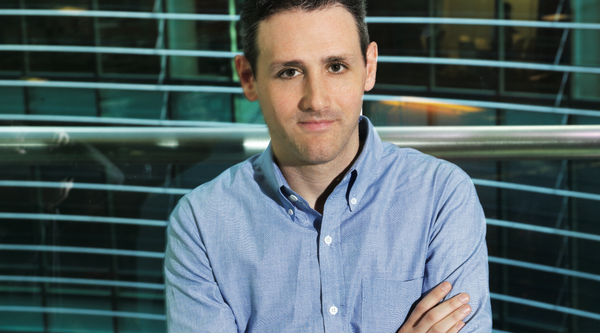 (NEW YORK) You may not know his name, and you probably haven’t read his magazine, but you certainly could learn a thing or two from Businessweek EIC Josh Tyrangiel. He works his tail off every week making hard news fun for the rest of us. Let’s get to know him, shall we?
BY ALEXANDRA ILYASHOV

You won an ASME for General Excellence last year. Did it change your life?
It hasn’t changed my life, but it did change my night. If we hadn’t won, we probably would’ve looked at each other and said, “Oh, man! The ASMEs suck. Let’s go get a drink.” Instead, we said, “Oh, man! The ASMEs are awesome. Let’s go get a drink.” Similar outcomes with much higher spirits.

How about that Editor of the Year award?
An individual honor at a magazine is so bizarre. It doesn’t matter how brilliant anyone is, it takes a lot of people to make those ideas translate on a page.

Well played. Your magazine is absolutely packed with info. What’s the secret to great packaging?
Hire people who love to work. People underestimate the amount of labor that goes into making every page great. You need people who not only deliver for the group but find personal satisfaction in the tiniest details.

Hire crazy people, got it. Any other tricks?
I’m surprised people haven’t spoken about this more, but secret No. 2 from a management perspective is that you need to mix up your expertise. We have editors and writers sitting next to photo editors, graphic artists, and designers. For decades, journalists got used to sitting in their offices, going to the water cooler or out to smoke, and then back to their offices. Besides being a lousy way to run a magazine, I found it to be no fun at all. It’s insular and self-reinforcing.

What are the benefits?
It puts every story up for debate. A writer can say, “I want to write this at 4,000 words,” and the designer next to them might say, “I don’t want to read 4,000 words. It would be much better as a graphic.” It’s important to have those conversations before you get to the creation stage.

What do you look for in an editor?
Besides hiring people who work hard, I try to hire people who are uninsultable. We may take gratification in working on this magazine each week, and on the website, but ultimately this is for our readers.

How big is your staff?
Around 70 people. It’s pretty small. That includes everything: copy edit, design, photo, graphics, editing, and support. Everybody could always use more help, but I don’t think we ever have situations where people don’t know what they own. I’m not looking to expand.

Pretty swanky digs, by the way.
The point of this building is to have people run into as many people as possible, and I like that. I enjoy hearing feedback on the magazine. And the food’s great. They’ve got things like salted kale chips. It’s like the world’s best bodega.

Your schedule must be pretty intense.
It’s the only professional journalism life I’ve ever known. When I got hired at Time, [then managing editor] Walter [Isaacson] said to me, “Congratulations, your Friday nights belong to me.” And they did! I was there every Tuesday until 1 or 2 a.m. Wednesdays I’m here around 7:30 a.m., we sprint and close 40-50-something pages by 7:30 or 8 p.m. We have great gigs, and to keep those gigs you have to defend them; that involves doing a lot of work.

Is the Businessweek grind more grueling than Time?
Oh, this is a much harder place to work.

Why?
More pages! When I left Time, it had 32 pages of edit. [At Businessweek] we put out 64 to 66 pages. It’s a lot of pages, but the whole reason for the magazine to exist, and its future, lies in communicating to readers that they’re getting their money’s worth. In fact, they might even be ripping us off!

How are you feeling about print in general?
The last decade in magazines and newspapers has troubled me because no one was fighting for their reason to exist. They were taking for granted that people would read out of obligation. They didn’t, and they won’t. You have to fight!

Your covers have been getting a bit of attention. What’s your favorite so far?
The “Let’s Get It On” cover about the merger between United and Continental just made me laugh. With the “It’s Global Warming, Stupid” cover, I was sort of surprised by the reaction. There were a dozen of us working through the hurricane, and that’s what all of us were discussing. The best covers capture what people are talking about.

How did you hook up with your creative director, Richard Turley?
When I came on, it was obvious they needed a redesign. In a very short timeframe, we needed someone with a vision. I wrote a 5,000-word manifesto of what the magazine ought to be and I sent it to two people. Richard read it, got it, and within a week we were working together over the phone. I was a great admirer of The Guardian’s “G2” section, which he did. We sit across from each other, and we’ve gotten so good at communicating through grunts, nods, and kicks under the table. Both of us are uninsultable. I’ll tell him, “That’s a shitty idea,” or he’ll tell me, “That story’s a disaster.” Making a magazine is 1,000 decisions in a week, easy, and you will definitely come up with an idea that’s terrible. You have to! It’s about acknowledging good work without lingering over it. And it’s a joy to have someone who works as hard as you and takes hard stands that you don’t always agree with.

What’s the most “Josh” thing about the magazine?
I want it to be fun. One of the best ways to share a culture is by joking about that culture. I like the magazine to have some velocity and in-jokes, and to not be afraid to make references some readers might not get. I couldn’t imagine doing something that’s endlessly serious.

Has your competition shifted since you arrived?
For years and years, it was the business set: Fortune, Forbes, and maybe Money and Smart Money. But it’s very difficult to compete against titles that don’t come out with the same frequency. The Economist is really our main competition.

Do you notice other titles cribbing your designs?
Elements have been ripped off, to put it bluntly, but it’s a copycat league. I expect that. We’ve been inspired by other people, too, so it doesn’t bother me.

You’re quite the young duo! Can’t believe you’re only 40.
We’re only young in the context of this business. I have friends my age who are retired who went to Silicon Valley. This business was reluctant to take risks for a while, and understandably so.

Were you a risk?
Oh, absolutely. I’d never actually been in charge of a magazine before—I’d only been No. 2, and I didn’t have a business background. I’m a great beneficiary of the chaos in our industry. If things were going great, it would have been, “Wait until you’re 50, and then you get to run your own magazine.”

Which editor would you like to trade lives with for a month?
Anna Wintour has created an amazing business, and I’d love to get my hands on the wheel of that really stylish battleship for a little while. Man, who wouldn’t want to be Anna Wintour for a month?

You might have to go shopping. Is this how you usually dress?
My first day at Bloomberg I wore a suit. I thought, “Oh, I’m at a big-boy magazine now!” Then one of my bosses here noticed and told me he expected me to dress the way I always did. I said I’d never disappoint him again.

VFiles Breaks It Down At Bow