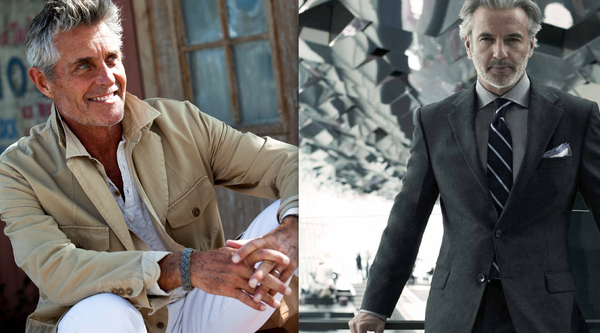 (NEW YORK) The Dow may be down, but fashion’s S’n’P index is way up! No longer relegated to pushing aftershave and playing the goofy dad in the Kohl’s catalog, guys with a little gray on top are landing major campaigns and raking in the big bucks. We went hunting for the biggest foxes and bagged these three.
BY JENNA SAUERS

Bernard Fouquet, 61
Fouquet has been modeling since 1976—not counting a 10-year break to raise a family and become a helicopter pilot. Based in Paris, he’s worked as an S’n’P since 1990.
CLIENTS: Tommy Hilfiger, Brooks Brothers, J.M. Weston, Azzaro Chrome, Clarins

FOX APPEAL: “I think the baby-boomer demographic is something everyone wants to target right now. I’m not an anthropologist, but I think that’s what’s going on.”

FACING FOX: “It’s just like every job in the world: after a while, people don’t want you—I think it can be tough on your ego. But I’m pretty lucky, and I had a great year last year. But you never know if the job you just did will be your last one.”

Brad Fisher, 51
A successful painter, Fisher recently had work featured in the windows of Hugo Boss in the Meatpacking District. “For some reason,” he says, “the crazy-artist gray-hair-bearded thing works well in Europe.” He’s been an S’n’P for 11 years.
CLIENTS: Selima Optique, RRL, J.Crew, Bloomingdale’s, Esquire, Fantastic Man

COLD HARD FOX: “You age out of this business. Women do too, even faster. That’s the trade-off: the girls make way more than we do, but we can work much longer. You go through this period where you’re not in your 20s anymore. You don’t have the boyish good looks. But then, at the other side, if you look like you’ve aged naturally, you can have a whole second career.”

FOX POPULI: “During harder times, people want to see a man in a suit. They don’t want to see a boy. They want to see someone who looks like they could go out and kill a beast for dinner.


T.R. Pescod, 47
Pescod modeled in his 20s in Europe and in Japan, but gave it up to pursue acting. In his 30s, the business beckoned, and he’s been working steadily ever since.
CLIENTS: Paul Stewart, Barneys, L’Oréal. He’s close friends with Ina Garten, so you may have seen him on her show, too.

FOX AND FIGURES: “I was cast in a Banana Republic commercial…Peggy Sirota, the big fashion photographer, was directing the commercial. And she said, ‘Why don’t you have a modeling agent? Gray hair is money, honey!’”

FOX ENVY: “There’s a small handful of us salt-and-pepper guys in the biz. And it’s funny because there are younger guys I know who are in their 30s who say things like, ‘Dude, I just wish I had gray hair!’”