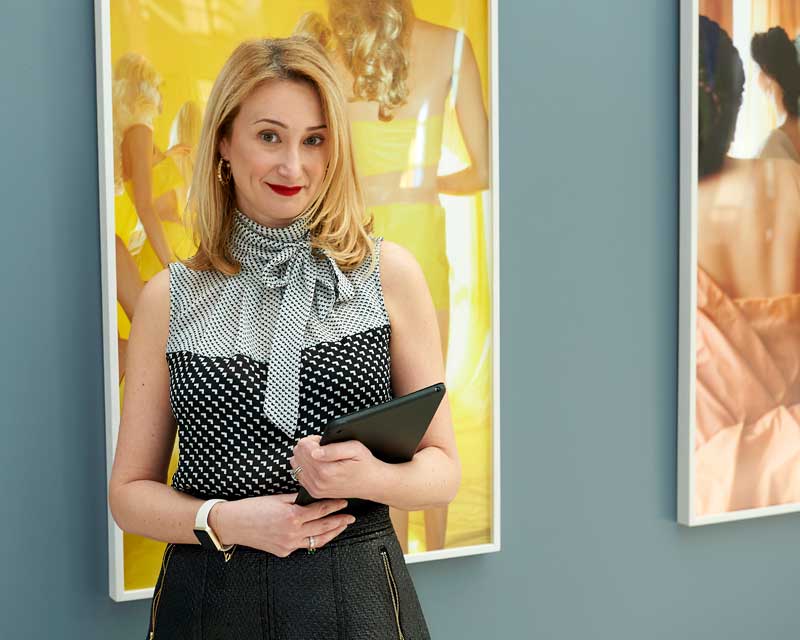 If you ever wondered what it’s like working alongside Cosmo EIC Joanna Coles, you’re in luck. The Daily got a peek inside the office life of the editrix and Snapchat board member when we visited her assistant, Heather Passaro. There, she told us all about JoCo’s world, from the treadmill desk and her Earl Grey obsession to her biggest pet peeve, and the perks of being assistant to the EIC of the sexiest leading women’s mag.

What’s your background like?
I studied marketing and PR. I did fashion PR for three years and decided I was sick and tired of pulling knives out of my back every time I turned around. I started freelancing at InStyle as a temp, and Time Inc. offered me a job. I’m glad I went over to publishing.

How did you end up a Cosmo girl?
I used to work at People for Larry Hackett and Michelle Tan, who is now the editor-in-chief of Seventeen. She called me and said, I have an incredible opportunity for you—you should meet with Joanna Coles. A few days later, my cellphone was ringing and it was Joanna Coles, the woman herself. It doesn’t really happen that way, and usually you go through HR nonsense. I came in, met with her, and the rest is history.

What was the interview like?
It was sweet and quick. I met with Joanna in her office—I think I was here for about two hours—I met with the executive editor, Holly [Whidden, director of strategy & communications), and about a week later, they gave me the job.

Were you intimidated by Joanna?
Well I did my research. I came to the interview in black leather leggings and Cosmo pink lipstick. I was excited and nervous, but mostly excited. When I sat down and talked to her it was like it was all becoming real.

What did you learn from being an EA at People?
Since People is a weekly magazine, it was much quicker. Here, even though it’s a monthly, Joanna’s whole world is like a daily newspaper. At least I would assume that’s what it feels like. She’s extremely busy and there’s never a dull moment. There’s always something going on, which is a great thing—you don’t want to be bored as an executive assistant.

How is working for Joanna different from working for Larry?
First, working for a man and a woman is completely different. With a woman you share the same sort of likings, and there’s a lot more that she’s in charge of that I want to be a part of. I always wanted to be with the largest women’s brand. Working for Joanna makes it real.

Did former EA Sergio Kletnoy give you any pointers?
My first day, Joanna was stranded at Sundance. Luckily, Sergio was still acting assistant, and he showed me the ropes without her there. It was easier that way. He told me there’s lots of tea in the day, always make sure the schedule is correct—because it’s an incredibly jam-packed schedule—and endless amounts of dark chocolate need to be on hand. That’s about it. I just swooped right in.

And her Earl Grey obsession—how many cups are we talking?
About three to four. She’ll go Earl Grey and then some days there’s an herbal kick. It depends on which way the wind is blowing. I got called out on the Today Show [when Natalie Morales played assistant for a day]. I told her I give Joanna Earl Grey…and sometimes I give her English Breakfast. It’s whatever I can get my hands on.

What did Natalie ask you before she took over your EA duties for the day?
Quite a few things, like, How do you answer her phone? What happens when she asks for this? There are times when Joanna asks for something, but in just one word—you don’t get a full sentence. So Natalie had a lot of questions about that. Natalie was pretty good…I think Joanna was more nervous.

If the Cosmo show happens, who would you cast in your role?
I’m not going to lie, I love Kate Hudson.

A little How to Lose a Guy in 10 Days?
It’s slightly like that, actually. Joanna does give people stories that makes them go out, live the part, and write about it.

What did all of your friends want to know when you started this job?
Does the treadmill desk actually exist? Yes it does. She is on that treadmill desk in heels most days. I don’t think Joanna can even walk in flats. But she does wear Yeezy sneakers.

What’s one of the funniest things she’s said during a meeting?
She says funny things all the time. If I had to go with one, it was when we were talking about serious things, and she says to me, ‘When is it that you’re going to have your hair colored?’ She’s very particular, which is a good thing because it means nothing ever falls between the cracks.

Does Joanna ask you for input?
She asks me quite a few questions about new and trending things. A lot of the times we use emojis on pages, and she’ll ask me, What’s your thoughts about this emoji? Should this emoji go on this page? Or, Would you wear this? 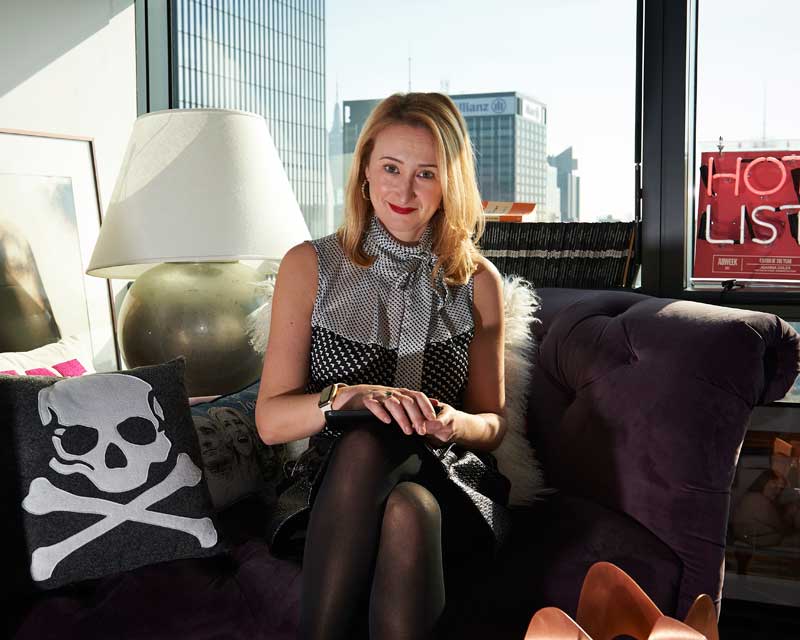 Were you there when Joanna found out about her Ad Age win?
I was! She was excited in the Joanna way of being excited. She constantly would be like “Wow!” I think it’s a delayed reaction sometimes. But she rang the gong and had champagne ready for the entire team.

She has a gong?
She bangs the gong. To celebrate, it’s always champagne and Momofuku Milk Bar birthday cake truffles. That’s the Cosmo diet. [Laughs]

On what other occasions does she bang the gong and pop champagne?
ASME nominations, when there’s a big ad page sold, or for someone’s anniversary. Someone recently hit 20 years at Cosmo, so the gong definitely got banged for that one.

What’s the work-life balance like?
I have to say that the job is 24/7—her schedule is nonstop—but unless she’s traveling on the weekends for business, it’s pretty normal.

Does she really pull all-nighters in her office?
Yes, and I never know what I’m going to come into the next morning when I see her in pajamas on the treadmill.

What’s she like the next day?
She’s fresh as a daisy.

What’s her secret?
Lots of tea.

What kind of boss is she?
She’s an amazing boss. Joanna has the ability to hire the best of the best, and it really does take an entire team to produce what we produce. She’s extremely fair and good to me, as she is to the rest of team.

How do you start off your days?
Joanna is up walking the dog at 6, she’s at a SoulCycle class, and if not at a breakfast she comes straight to the office. I’m here at 9ish. She starts off the day with all the papers. It’s a must. She checks emails, and the rest of the day is like a running horse. There’s just one thing after another.

When do you leave the office?
Whenever the job is done. [Laughs]

What’s on the calendar today?
We started off with a SoulCycle class, then we had a breakfast. We had a few lineup meetings, a lunch, and then we have another three meetings and an event this evening.

How do you keep her on schedule?
My Apple Watch is constantly going off to tell me what’s going on, and I never leave without the iPad that has her entire calendar in it.

What have you learned here so far?
Whatever the mission is, we have to complete it. Whatever the obsession is that day, it needs to happen.

What’s something you were surprised to learn about Joanna?
You are going to fall out of your chair…Joanna was the first journalist to get an interview with OJ Simpson after he was found not guilty. I bet you thought it was going to be like, Yellow is her favorite color.

Wow! Does she have any pet peeves?
You must always introduce yourself with your first and your last name. She feels that men always do it, and it’s something she encourages all of the women in our office to do. Speak firmly, loudly, with a handshake and look the person in the eye.

Does she give out any other advice?
Call, don’t email, if you want an answer or you need to get something done. I think that’s the journalist in her—get them on the phone!

Any big news on the horizon?
I’d tell you, but then I’d have to kill you. [Laughs] We’re excited about the Sheryl Sandberg package in the April issue. She’s been our careers editor since Joanna started.

There was a lot of Snapchat paraphernalia around her office!
When Natalie came in, [NBC] couldn’t show logos, so the Snapchat sticky pad on her desk covered all of them. After a while we thought it looked good. And we always have a sticky on the camera on her computer screen—you never know who’s looking in!

Tell us more about the treadmill desk…
She has a new one coming, and this one has been fitted to her. It’s a Lifespan custom walnut desk. She wanted a drink holder, a lipstick holder, she even wanted a rosé container. Our fashion director is getting the old one.

What did Joanna say when you told her about this interview?
[Pause] Thrilling! And to be sure to wear lipstick if they’re taking a picture and make sure you have your hair done. 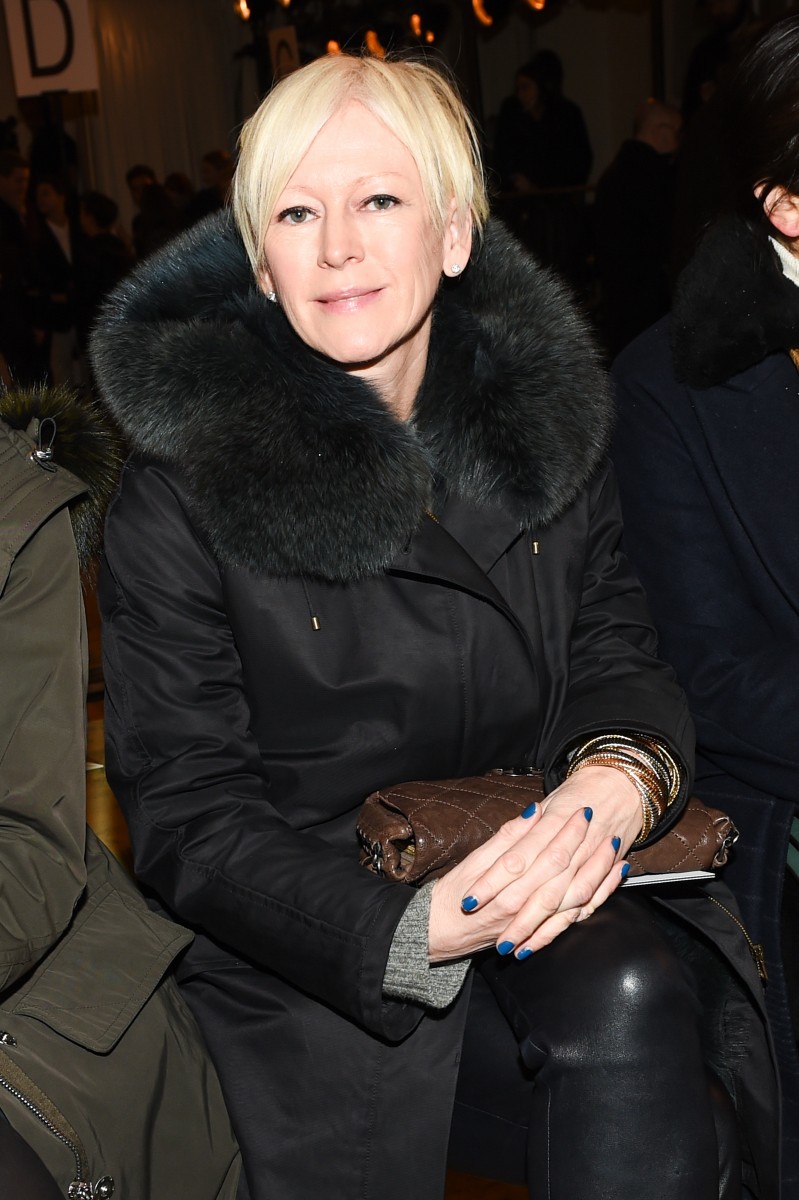 Plus! 3 questions with Joanna…

How did you know Heather would make a good assistant?
She asked me if I would mind if she color-coded, and I said, You’re hired.

What’s a top question you ask prospective EAs during the interview?
What’s the best corporate gift for under $12?