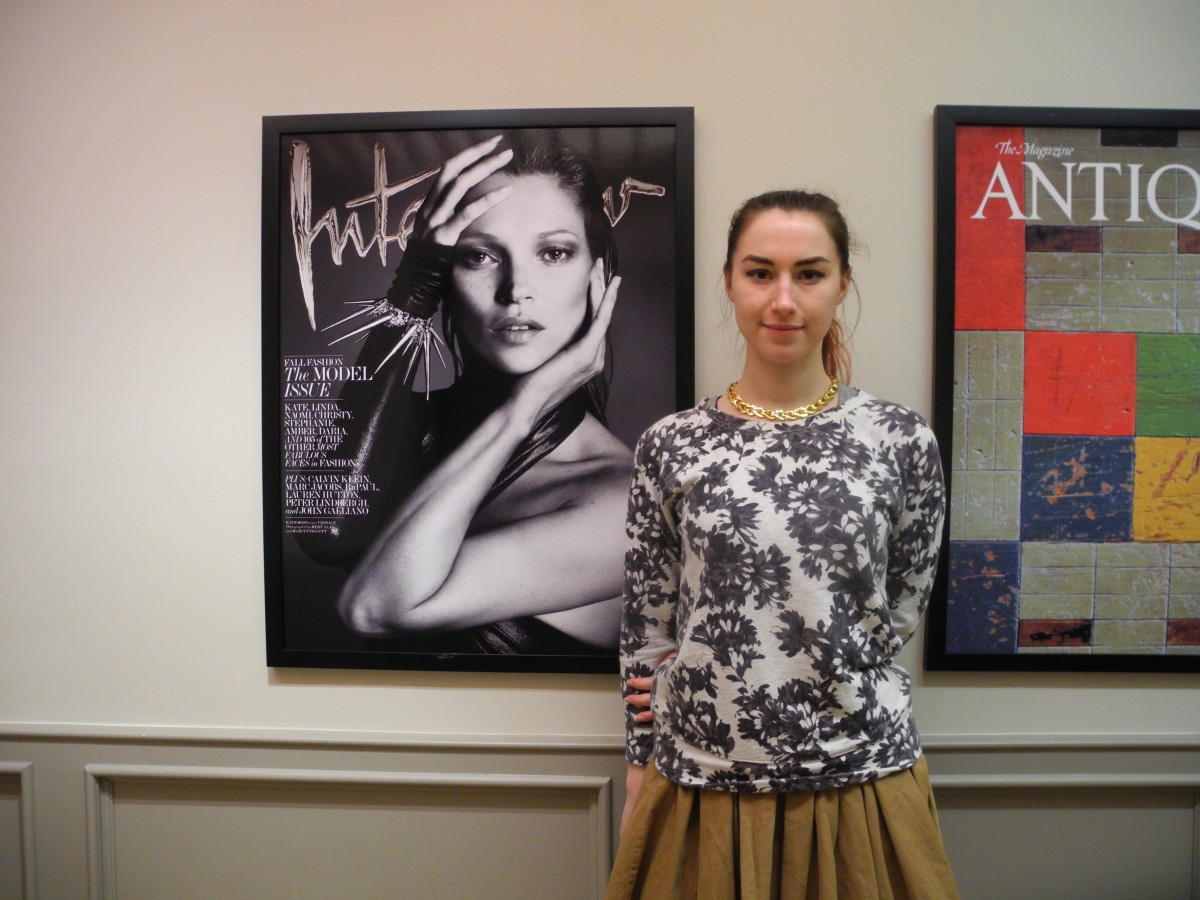 Interview snagged Keith Pollock as their editor-in-chief this past February, and the glossy continues to stay true to their Andy Warhol-defined DNA. Associate editor Rachel Small has been on board since Pollock’s predecessor, Stephen Mooallem, was the mag’s top ed. While Small calmly juggles assisting the pub’s EIC, she also does quite a bit of writing, and assists editor-at-large Christopher Bollen as well. Learn all about life at Interview in this installment of The Assistant Files…

Tell us about yourself.
I was born in Chicago, but my family moved to Los Angeles, where I went to an all-girls high school. From there, I went to college at NYU. I graduated with a double major in media studies and art history. My first major internship was with the PR team at Tom Ford, and from there I got a fashion internship at Vogue, which turned into an internship for their special events team. When I studied abroad my senior year at college, I did an editorial internship at this English expat journal that was based in Prague. It made me realize I really wanted to get into editorial.

What happened after Prague?
I got back for my last semester at NYU and landed at The Daily Beast for a research internship, which I finagled into a culture editorial internship. The summer after, I interned for Town & Country‘s editorial team, which was great. Then I found out about the editorial assistant position at Interview and I interviewed in May.

What did the interview process entail?
First I interviewed with the managing editor, and then with Stephen and Christopher. I was so nervous during the interview that I actually paused to tell them how nervous I was. They both laughed it off, and I was like, “I’m going to be OK!” Then I did an edit test and an interview with HR, but I still didn’t think I’d get the job. Three months later, I remember standing on the treadmill and answering a call from an unknown number. It was the HR person, offering me the job.

How has your position changed since you first started at Interview in 2012?
I started off assisting our editor-in-chief Stephen [Mooallem], who left to join to Harper’s Bazaar in February, and the editor-at-large, Christopher. Keith took Stephen’s place and then I became his assistant as well. Last April I was promoted from editorial assistant to associate editor, which has been really great. I have much more responsibility, and I can do a little bit more writing. All along the way, I’ve also been able to cover a lot stuff for the website. I do some nightlife, a little bit of fashion, and I cover a lot of art events as well. Now I have more responsibility in terms of coordinating stories, talking with publicists for actors or musicians, plus galleries or book agents in the case of artists and authors.

Starting with your arrival in the office, what’s a usual day like for you?
I get in around 10 a.m. and I check up on emails and flag the important ones I need to get back to. If Christopher’s in, he’ll send me various duties, which become my priority. It could be anything from calling in a book that he’s interested in checking out or finding a contact for someone that he wants to get a story in motion with. At the same time, Keith will have me coordinate his appointments, lunches, and things like that. In my downtime, I write pieces for the website and I look up ideas to include in our Agenda pages, our 2- to 4-page news item section. I do the same with the Back Page, which always comes from our archive. I also have to coordinate the calls between celebrities and their interviewers. It’s not time consuming, but it’s the one part of my job that I really can’t mess up. Imagine if Kanye West was being interviewed and I forgot to coordinate with his interviewer. There would be a slim chance of ever getting him on the phone again.

Do you do personal tasks for either Keith or Christopher?
The tasks I do for them are mostly work-related. I have no scandalous stories from Interview! Although I could tell you all about getting Anna Wintour’s coffee a few years ago…

Ha! Keith has frequently been called a digital influencer. Have you taught him anything in that realm?
I have definitely not taught Keith anything related to digital! Following him on Instagram and Twitter is really cool because he has such good feeds. I don’t know if he’s interested in my feeds at all, but I’d like to think he is. When he talks about social media, it’s interesting to see the angles he brings up; they’re very new and fresh.

Is there a particular beat you like to cover?
I was an art history major, so it’s been really nice to see what’s going on in contemporary art right now. In school, my most recent studies took us right up to Andy Warhol, so it’s like I’ve been playing art catch up since then. Now I feel like I have a good handle on the art scene.

What does closing an issue entail?
We’re actually closing the Art Issue right now, but luckily it’s not that insane. The most intense time for me and the other associate editor, Colleen Kelsey, are the couple of weeks leading up to close. That’s when everything is coming together. We’re recording all these interviews and transcribing them. During close, Colleen and I mostly focus on writing 100-word paragraphs on the contributors we want to highlight for the front of book.

How do you feel about the mag’s founder, Andy Warhol?
I was actually not a huge fan of Andy Warhol when I first started, and I didn’t really understand pop art. But over months of just reading the interviews he did back in the ‘70s and early ‘80s, I got more into it. Then at one point, I read The Philosophy of Andy Warhol and I realized he was a very funny guy. That’s one of the reasons he was so successful. It turns out he actually founded Interview as a film magazine, so he could be on the press list with film critics and make friends with movie stars. It kind of worked for him!

Do you cover a lot of Warhol-related events or products?
We actually get a lot of pitches about Andy Warhol, like ‘XYZ brand collaborated with the Andy Warhol Foundation and they put a Warhol print on their bottle.’ We get so many of those but we rarely cover them, unless it’s really special. I feel like Andy would have appreciated his name being used by so many brands.

Is Peter Brant around the office often?
Sometimes he’ll come in and make an appearance. Because we have such an open office, everyone will be like ‘Peter Brant’s here!’ But he’s a cool guy, and from my understanding, the magazine means a lot to him because he knew Andy back in the day.

Where do you see yourself in five years?
I very much hope to be writing about art in the future. I know everything I’m learning at Interview will be invaluable for that. I’d eventually like to get my masters in a combination of art history and American studies, but that’s further down the road!