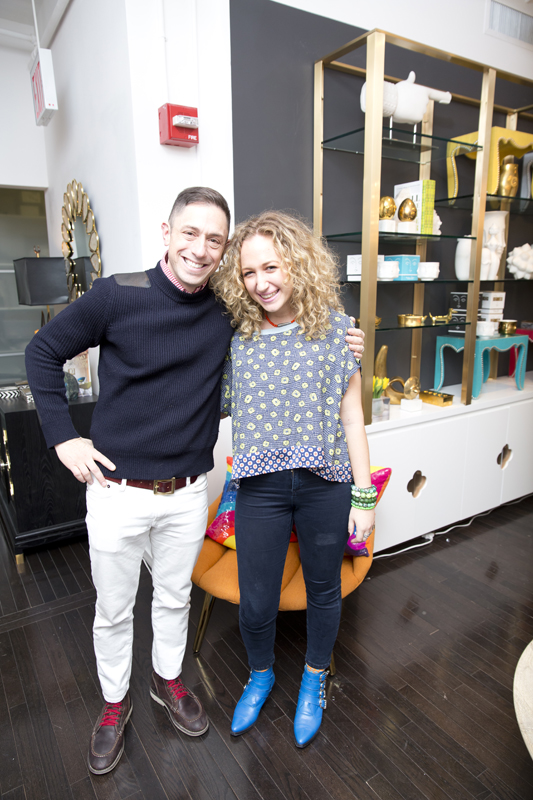 (NEW YORK) For today’s take on “The Assistant Files,” your Daily took a trip into Jonathan Adler‘s well-decorated world. Nestled inside the interior design maven’s showroom, which was stuffed with graphic couches, cheeky pottery, and witty accoutrements, we had a chat with Adler’s assistant/office manager/everything else, Lauren Moger. She’s got a background in décor, and is so much more than a scheduling wizard; she’s armed with keys to just about everything in Adler’s life, and she’s prepared to tackle any design challenge that may arise.
BY DENA SILVER

Where were you before you started at Jonathan Adler?
I grew up in L.A., and I graduated from Boston University. The day after graduation, about a year and a half ago, I came to New York for an interview with Jonathan Adler. I ended up getting the job.

How did you hear about this job?
A friend of a friend referred me. I obviously knew a lot about Jonathan and I was a big fan. When I was in college I’d always walk by the Jonathan Adler store on Newbury Street. I’d peek in and I would always wish that I could work in this world. And here I am!

Where did your appreciation for interior décor come from?
My parents own, run, and market the Long Beach Antique Market, out in California. Interior design was the world I grew up in, but to a different extent. I also studied hospitality in college, so they kind of correlate.

Did your parents’ business influence you as a child?
Yes. It still does! My parents are big collectors, as is Jonathan, and I’m starting to become one too. You have to be if you want to work here!

What was the interview process like?
I expected to come in here and interview just JA. But obviously I interviewed with about five people before him. The first interview was with three people, and when they called me back, I finally interviewed with JA. It was nerve-wracking!

What is Jonathan like as a boss?
He’s so fun. We have a really playful time together. Obviously it gets serious when it needs to be, but we thrive off each other.

How much trust does he instill in you?
Well, I have keys to his house and his car!

How soon into the gig did you get the keys?
Literally on the second day. He asked me ‘Do you drive? I need you to pick up these chairs in Midtown.’ I’m a Cali girl, so of course I drive; I was like ‘Okay, where’s your car?’

Aside from being his assistant, what other duties do you have?
I’m also the office manager, so I pretty much run the office, the showroom, and our headquarters. I work a lot with our PR and marketing team. In addition, I have the privilege of working with our licensing, accounting, and interior design teams.

What’s an average day like, for you?
I get into the office around 8:30 a.m. and Jonathan gets in a few minutes after me. I make sure all the lights are on in his office and it’s looking perfect, I make sure there’s coffee and his newspapers are out. Then I get to work. Aside from those 20 minutes, I don’t have a daily routine.

Are you in the office on the weekends frequently?
Not that often; it’s actually really rare for me to be here on a Saturday or Sunday.

JA is a great nickname for Jonathan! Does he have any nicknames for you?
He has a lot of nicknames for me, actually. Moger or Mog-oncé, like Beyoncé, which is my favorite. There’s also Mogsey-Wogsey, Mogs, or Dude. I get Dude a lot.

Does JA have any particular food or drink preferences?
JA loves his tea, and he is very particular about it. In the morning he drinks Tazo Awake. Per his instructions, I put whole milk in it until it’s a specific color, which is some particular Pantone hue. He doesn’t know the exact shade, so I estimate. Sometimes I get it right, and sometimes I don’t. Then his afternoon tea is Tazo Refresh, just to wake him up a little, with no milk, no sugar.

What are his fave foods?
JA is obsessed with pie. I think he has pie every day.

What are his lunches like?
He lunches with the president of our company, David Frankel, at Giorgione’s, which is around the corner from our office. They sit at the same table at the same time and they order the same thing every day. JA gets chicken paillard with steamed asparagus or spinach and tea.

Do you have to make a reservation for him?
Every day I have to call, because they won’t let me make a standing reservation!

What’s your favorite part about the gig?
I do his personal travel and vacations, which I love.

Is he a window seat or an aisle seat kind of a guy?
He likes an aisle seat. He hates when people climb over him, and I don’t blame him. I feel like I’ve got his travel down to a T: He has to be on a flight with internet, and if he’s traveling overseas, he has to be in a seat with a 180-degree decline for his back.

Where has he traveled recently?
He just got back from India for a design trip, but we wanted him to have fun. I got him a tour of the Taj Mahal, and a massage overlooking the Taj Mahal. I like to throw in a little treat.

Did you go out there alone?
He was like ‘Shelter Island is really dark and scary in the winter and it’s not very populated. So please take a friend to stay with you at my house.’ It was so eerie; there were no lights on the street! I was so glad I brought a friend. We stayed in the guest room.

What is Jonathan’s creative process like?
He’s constantly in the zone all day, every day. He likes to be really verbal and expressive with what’s on his mind. He’s really interacting with everyone that he’s working with. There are moments where he doesn’t want me to interrupt him, and I know when it is, but I can usually tell when that is.

Jonathan started his career as a potter. How often does he work on the wheel now?
We have one wheel in the office, and JA is on it all the time. It’s awesome when you walk by the pottery studio and he’s just throwing down, listening to music in his Crocs with his sleeves rolled up. We also have Pottery Night Wednesdays in the office, where we allow any of our employees to stay late and make their own pottery.

Any other awesome parts of the company culture?
We’re actually working on that right now; we’re thinking about a pub crawl. I’m trying to get an intramural sports league together, although with the population of this office, there’s not going to be many people signing up. This summer we had an ice cream social with Steve’s Ice Cream. And our company holiday party is always really fun.

Are dogs allowed in the office?
There are always a million dogs in the office. It’s one of my favorite things about working here! Although I’m the one that has to clean up after the dogs, which isn’t so great. I’d say on average, there are six or so dogs at one time. But there’s been a moment where we’ve had like 10 dogs in the office. I sit at the front door where all the delivery men and the messengers come in and the dogs just go crazy when they walk in.

Has this job helped out your own home décor situation?
One hundred percent! I never thought that I would be good at decorating my house, but every time I have guest come over they’re like ‘Oh my God, you have so much Jonathan Adler everywhere! It looks great!’ I’m learning a lot, especially from setting up our showrooms, and making sure everything is put in its place.

Jonathan recently teamed up with TOMS for a second time. What else does he have going on?
We’re just launching a collaboration with Tumi luggage, which I can’t wait to rock the next time I travel. We also did a collab with AOL on a web series that I got to work on with JA.

How does your job change when these collabs come up?
There are just more meetings for JA to attend. For the TOMS launch we had a party at Jonathan and Simon’s house, so I was onboard with prepping the party. I also had to make a playlist for the party, since I know what kind of music JA likes.

How often does Simon Doonan, Jonathan’s husband, stop by the office?
Even though he’s writing and working at Barneys, he stops by once a month.

Does he come to the holiday parties and other company functions?
He won’t come to our holiday parties, but he’ll come to all of our in-store events. Simon has a lot of influence; certain things have to be approved by Simon.

Do you ever have scheduling problems between Jonathan and Simon?
Not really. Simon’s pretty flexible, as is JA.

How often does Jonathan switch up his home décor?
JA is constantly changing up his house. We have a massive warehouse in Brooklyn that he uses that as a storage unit. So anytime he’s swapping out furniture, beds, couches, he takes all of his old stuff and puts it in the warehouse. I work on the different designs with him and our interior design team for his house.

What was the most surprising part of this job?
It’s how involved JA is. I thought he’d be here once a week, take a meeting, and leave, but he’s here every day. He cares so much about this company.

What’s the hardest part of the job?
JA has an impeccable memory and nothing ever slips his mind, ever! Months will pass and he’ll bring something up that had completely slipped my mind. He really has the memory of an elephant.

Shot of The Daily: Riccardo Tisci and Q-Tip's Turntable Time

7 Elements to Spruce Up Your Work...

10 Aromatic Candles to Improve Your Mood