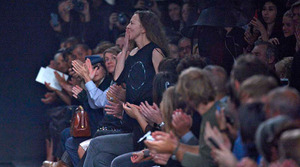 (NEW YORK) When Belgian designer Ann Demeulemeester told the fashion world in November via a handwritten letter to the press that she would be bidding adieu to her namesake label after 27 years of business, many were left wondering about her next move. “[Ann] has a very strong and powerful style, but I understand that at some point you want to have a life, and I’m sure that’s what she’s doing,” fashion show producer and former Antwerp Six collaborator Etienne Russo told The Daily. “I think she’s going to do something that’s less invading.” Her first project post-resignation? Demeulemeester is writing a book that will be published by Rizzoli, due to hit bookshelves in mid-October. The introduction will be written by musician and author Patti Smith, a longtime muse and friend of Demeulemeester. The $100 tome will contain more than 1,000 photographs that offers an intimate look at the mysterious designer and her lauded career.

A trio of designers, including Sébastian Meunier, Mirjam van den Akker, and Patrick van Ommeslaeghe, previously worked for Demeulemeester and are the creative successors for her eponymous label. Meunier worked on Demeulemeester’s menswear collection since 2010 and previously designed for Maison Martin Margiela. Van den Akker worked with Demeulemeester on her womenswear line for two decades, while Ommeslaeghe joined the label last September from Jil Sander.

The Ann Demeulemeester Collection Is Perfect for...

Christina Ricci Opens Up to The Edit...