The Art! The Parties! The Fashion! Highlights From Art Basel: Part Deux 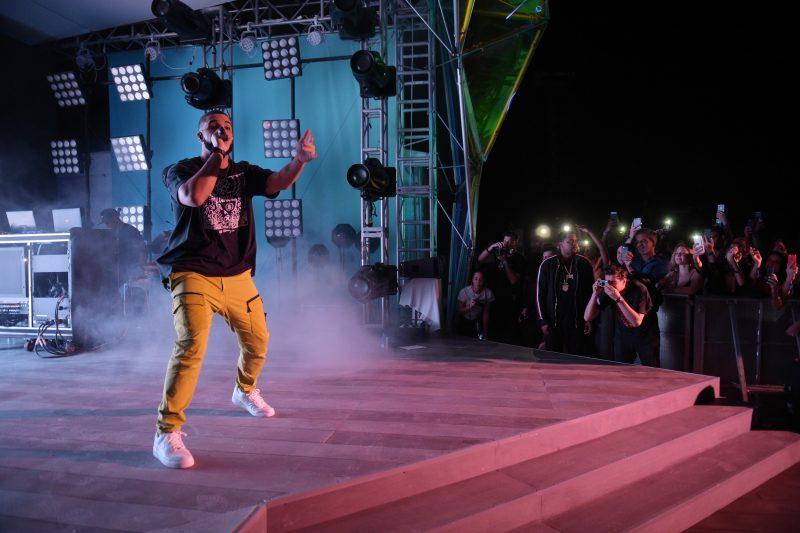 Between museum hopping, running into familiar faces at beachside lunches, and hitting South Beach’s chicest parties, it’s easy to say this year’s Art Basel was a jam-packed week. Here’s more of what we did…

Sant Ambroeus and Superga Host a Cocktail Party: Our favorite desto for cappuccinos in NYC, the Hamptons, and Palm Beach took to South Beach for Art Basel for a special cocktail party in collaboration with Superga on the rooftop of The Webster. The duo teamed up to celebrate the launch of their sneaker collaboration, which comes in two colors: Sant Ambroeus’s signature shade of peachy pink, and white. DJ Harley Viera-Newton spinned for guests, including Brendan Fallis, Alireza Niroomand, Steve Madden, José Parlá, Daniela Moreno, Valentina Hernandez, Robert McKinley, Jane Keltner de Valle, and Madison Utendahl. The sneaks will be sold at The Webster, supergausa.com and in Superga stores (New York and San Francisco) starting this week for $99 and you’ll get a pink Sant Ambroeus tote bag with your purchase. Score!

Drake + Virgil Abloh Collaborate for a Special Performance at Miami Art Week: An invite to be in touching distance to Drake? We approve. The Grammy award-winning singer sang for a select group of guests on the beach for American Express at their mega-chic Platinum House pop-up over at the Miami Beach EDITION Hotel. The singer sang his major hits like “Passionfruit” and “One Dance.” It was Snapchat and Instagram heaven, and Drake even took one of the audience member’s phones and sang into her camera. His performance was opened by spins courtesy of Drake’s pal Virgil Abloh. The crowd, including Michael B Jordan, Amar’e Stoudemire, Olivia Culpo, Timbaland, Tash Oakley, Bryan Boy, Rocky Barnes, Dev Windsor, Hannah Bronfman, Timo Weiland, Jennifer Fischer, and more, went bananas and sang along. P.S. Did we mention there were drones flying above featuring Drake’s lyrics? Yep, that happened. Major props to American Express for an awesome, awesome night!

Pulse Art Fair: In between the parties, we had to make some time for some art! In addition to browsing The Miami Beach Convention Center and checking out museums like The Bass, we headed over to Pulse Art Fair to scope out paintings, sculptures, and chic installations. Some highlights? Aya Rodriguez-Izumi‘s interactive “Wish” installation (a tree with written wishes hanging off branches), and the Pussy Photo Booth Project, which allowed guests to share their image and voice in a collective effort. There were also fab paintings by Winter/Hoerbelt in the Galerie Heike Strewlow’s booth, as well as paintings on plexiglass made by artist Loring Taoka.

Ärt Maison Miami Dinner with Daniel Arsham, Loren & JR Ridinger + Duane & Amber Ridinger McLaughlin + National YoungArts Foundation: It was the party that closed out Art Basel, and arguably the party of the week! Ärt Maison hosted a mega celebration of fresh talent and emerging stars in the world of visual art. Designed and curated by DNA Atelier co-founders Duane McLaughlin and Amber Ridinger-McLaughlin, the event brings audiences into the intimate and disruptive inner worlds of its featured artists, who have included Mr. Brainwash, Retna, and CJ Hendry. Ärt Maison has become recognized as a “melting pot” of visionaries, industry leaders and social disruptors whose passion and talents create infrastructure to support a thriving artistic community.

The evening, which was presented by Bentley, DNA Atelier, Market America, Tequila Avión, and Shop.com, began with an intimate sit-down dinner in the stunning ballroom of the home of JR and Loren Ridinger (A.K.A Casa de Suenos Estate), hosted by artist Daniel Arsham along with the National YoungArts Foundation. Arsham announced his new Daniel Arsham fellowship with the YoungArts Foundation, which is a major new granting program for aspiring visual artists up to three years out of receiving their Bachelor of Fine Arts. One YoungArts alum a year will receive a $25,000 prize and year-long mentorship with Arsham as part of the program.

Music stars Fat Joe, Adrienne Bailon, Bon Jovi drummer Tico Torres, and model Karolina Kurkova were some of those who attended the dinner, which featured a delicious spread consisting of buffalo mozzarella and tomato salad, a selection of sea bass and truffle chicken along with delicious warm chocolate cake. Arsham built his incredible Lunar Garden art installation in the front of the Ridinger’s home, making for quite the insta-worthy moment. The evening carried on late hours into the night at the after-party where DJ Cassidy spinned for guests. It was chilly out so blankets were provided for guests to cuddle and dance in. Those who came out for the fun included Alicia Keys and Swizz Beatz, Virgil Abloh, Lala Anthony, Eva Longoria, artist Shephard Fairey, Petra Nemcova, Jonathan Cheban, Ronnie Fieg, and more. It was quite the star-studded night, that’s for certain!

The Daily Swipes Right at “Tinder After Dark” Bash