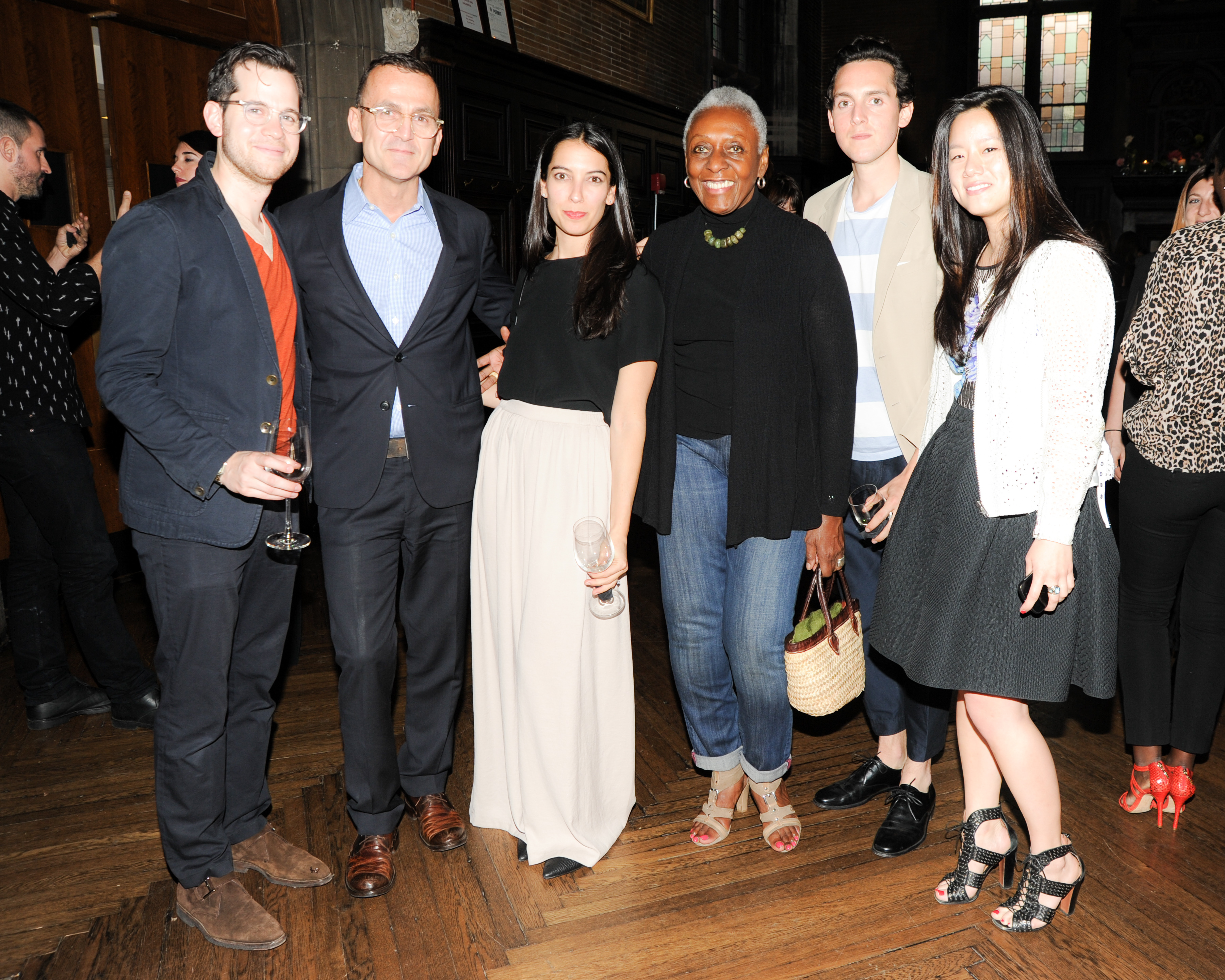 Target’s heating up their pair-up with the CFDA, using their expanse of resources and roster of nationwide stores to help foster young designers. And last night, at a regal sup to celebrate the most recent CFDA Fashion Incubator class, they unveiled their grand scheme of things to come. The fresh faced designers were in awe of the cavernous dining space at the Highline Hotel, where delicate pink flowers contrasted starkly against the religious relics and vaulted ceilings of the former Episcopal seminary. But their main focus of the night was repping their brands, and putting their freshly-acquired PR skills to the test. The stylish crowd included Eva Chen, Gloria Baume, Jane Keltner de Valle, Dao Yi Chow and Maxwell Osborne of Public School, Steven Kolb, Bethann Hardison, plus the 10 labels that are nurturing their talent in the Incubator: Kara, Dezso by Sara Beltran, Katie Ermilio, Orley, Nomia, Isa Tapia, Lucio Castro, A Peace Treaty, Kaelen, and Nonoo.

Before sitting down to nosh, the various fresh-faced designers had a chance to dish on what their first three weeks in the program has been like. “It just feels like we’ve made it to the next level, the big league!” exclaimed Farah Malik, one third of the crew behind bauble label A Peace Treaty. To Jesse Meighan, also of A Peace Treaty, it’s all about real estate: “Our CFDA studio is double the size of our last studio, so we have a showroom space within the studio. I just want to have meetings all day long.”  Dezso designer, Sara Beltran, is looking to a past member of the Incubator program for guidance: “Bibhu Mohapatra told me that they give you all the help you need, but if you’re not organized, you won’t get a lot out of it. Only you know what you need, you know your weaknesses, so you need to make the decisions on what to focus on.” As for the program’s hardest part, according to Kaelen Haworth? “It’s hard to get work done at the CFDA studio because it feels like summer camp. We keep the doors open and there are three dogs on the floor and music is always playing. Whenever I sit down to work I just want to go chat with other Incubator members and see what they’re doing.“

As for the CFDA and Target’s next collabs? There will be a Summer School Series where past and present incubator members can mingle and learn, plus a Target Best Brand award, where the prize is a two-week pop-up shop featuring one select label. Finally, there will be a design challenge to create a chic tech accessory for Uncommon. The winner of that challenge will find their design for sale online and in Target stores. Needless to say, we’ll certainly be hearing much more from this Incubator class from now until their graduation in 2016. For more details on these programs, we chatted with Kolb and Target’s director of design partnerships, Noria Morales to see what’s on board for their upcoming collaborations.

What’s the relationship like between Target and the CFDA?
Steven Kolb: Historically, Target has been a big supporter of the CFDA. They’re actually one of our largest and longest standing partners, dating back to when Fern Mallis was the executive director here. When you look at all the guest designers that they’ve had, how many of them have been CFDA members? So many of them! What Target has done for American fashion is not really recognized. Not to mention, the democratization of fashion has changed the business in a big way and that really stems from what Target’s doing.
Noria Morales: Target and the CFDA have been working together for years now on the Incubator, and one of the things we’ve wanted to do is expand programming and make it more dynamic for the designers. One of the main elements of the Incubators is education, because building a brand is a really complicated endeavor. We wanted to leverage the many incredible experts on our Target team as well.

Tell us more about what’s in the pipeline for the Incubator program!
Noria: We will pair up some of our execs with some of the Incubators members and make it into a summer school program on how to grow their businesses. Because who doesn’t love to go to summer school?
Steven: Well, I think people only like summer school when it’s voluntary!
Noria: That’s true! Then we’re introducing design challenges, which are a great opportunity for designers to explore their craft, make new things, and make a little money on the side! One of the challenges we’re doing is with a tech brand, Uncommon, which we carry at Target. The designers will submit their designs for the ultimate iPhone case, and one winner will get a $10,000 prize and their design will be carried exclusively at Target in October.
Steven: If you give 10 people one design parameter, it’s always interesting to see what comes out of that. You get a really great scope of designs, which is reflective of American fashion in its varied approach.

How does the challenge of designing a product outside of these designer’s particular focus help them develop as a brand?
Steven: When you ask any designer, when they’re starting out, what their ultimate goal is, they all say the same thing: ‘I want to be a global lifestyle brand, with men’s, home, and children!’ In a way, this challenge allows them to play around with that notion and spread their wings with something different.

We hear that a Target pop-up shop is also in the works…
Noria: Target will be opening studio space in Chelsea and one of the things we’ve wanted to do there is experiential retail.  It will be sort of a challenge for the Incubators, where each designer will present their vision for their ultimate pop-up shop, how they would like to bring their idea to life, and the most compelling story will be turned into a store sometime next year.

What’s your favorite part of being involved with the CFDA Fashion Incubator program?
Noria: It’s really been a very open and dynamic relationship, which I value tremendously. Plus, everyone at the CFDA has such great vision.
Steven: It’s a shared commitment to design that CFDA and Target have, which is what our relationship is built on.

Steven, how has the most recent Incubator group been acclimating to their new digs, since settling in at the CFDA on May 1st?
Steven: It’s been great, and they really hit the ground running! This morning they had media training, so they spent all morning learning how to talk to media. Last week they had a session on how to pitch, and they got to pitch ideas to a small panel of investors. The winners didn’t get an investment, but they did win tickets to the CFDA Awards. We also took them to The W Hotel in Vieques, Puerto Rico, for an on-boarding, and they’re already really close friends. The thing they realize is that they’re just across the hall from the rest of the people in their class, so they’re already sharing factories, fabric suppliers, and discussing who their retailers are. The Incubator program is definitely about making the business connections and learning, but it’s also about creating this camaraderie and a family-like feeling among each other.

Surprise! Surprise! Charlotte Casiraghi To Be The Face Of Gucci’s Cosmetics Collection