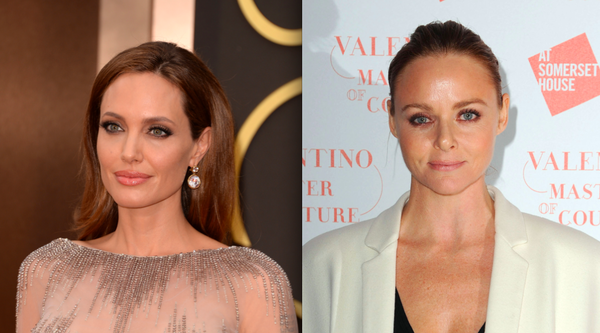 (NEW YORK) Pint-sized fashionettes, rejoice: Stella McCartney has joined forces with Angelina Jolie and Disney to whip up a silver screen-inspired capsule collection for the wee ones. Maleficent by Stella McCartney Kids is comprised of garb based on the Sleeping Beauty remake, which will hit theaters on May 30. Chic tots won’t have to wait until the film, starring Elle Fanning, is on the silver screen, to wear the new getups: the coed capsule collection’s eight styles will roll out late next month in McCartney’s stores, Disney stores, and online, according to WWD.

As for Jolie’s involvement? She stars as the wicked titular character. Jolie purportedly invited McCartney to Maleficent‘s set, and the rest is adorably-scaled history. This isn’t McCartney’s first go at a Disneyfied project: The designer turned out a spate of costume jewelry pieces in 2010 for Alice In Wonderland, directed by Tim Burton.

Expect the sandals, sneakers, T shirts, and frocks in the Maleficent by Stella McCartney Kids capsule, sized for ages four to 14 and priced at $75 to $185. There’s a do-good spin to the whole endeavor as well: 10 percent of sales made on the threads on McCartney’s site or in her stores will benefit organization SOS Children’s Villages.