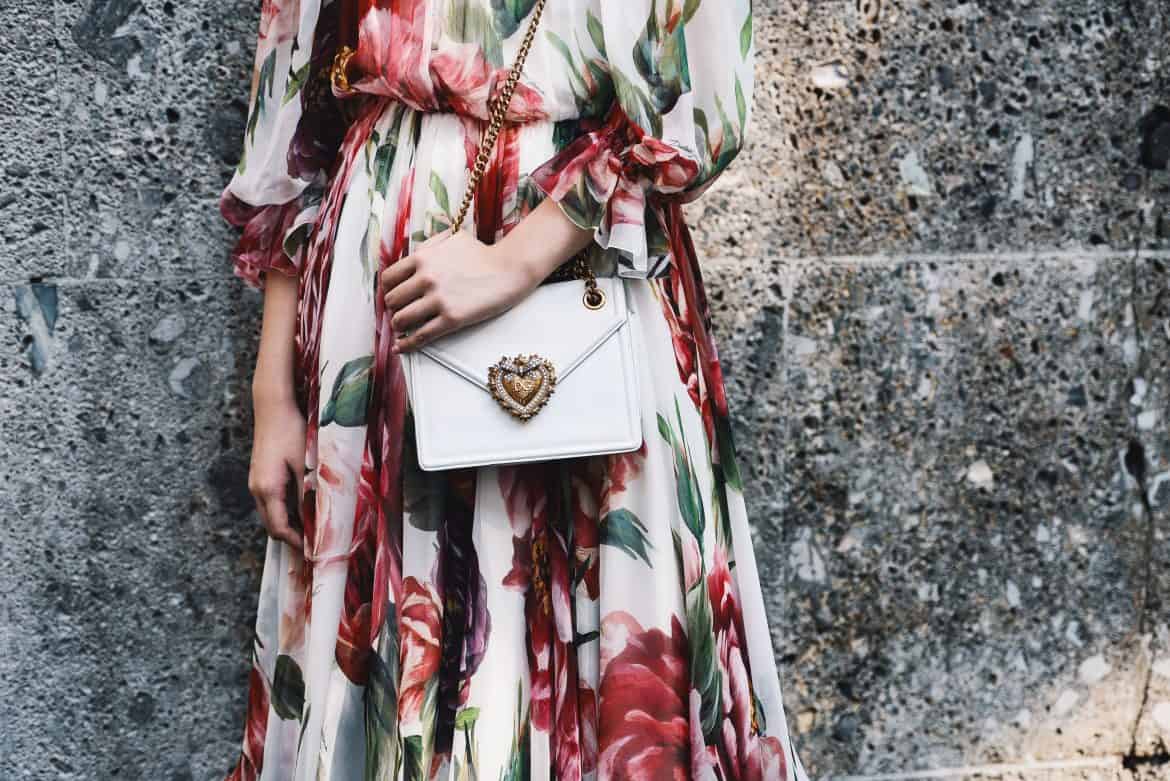 Giambattista Valli presented his collection in a film that unveiled the 50 looks proposed for Spring Summer ’21. Inspired by the ’60s, the brand did not lose their trademark details, like floral motifs and decorative ribbons (which were part of the hairstyles as well this time around.) In the film, we saw the models walk as if they were on a runway while different images of blooming Mediterranean nature popped up. The designer captured said images himself, while on vacation in the Punta Rossa natural reservation. The natural beauty translated into dresses and blouses, which had delicate and fresh flower prints, and the ruffles seen on shoulders, waists, and trims of garments creating a waterfall effect.

A post shared by Giambattista Valli Official (@giambattistavalliparis) on Oct 6, 2020 at 11:13am PDT

Agnès b.’s collection, “Croisière sur la Seine”, was presented through a video that tried to imitate a homemade film about a boat cruising the river, with relaxed models and beautiful vignettes of Paris in the background. The boating setup led to striped white and blue items and navy-blue overalls. The Summer Spring ’21 collection also included swimsuits and must-have accessories for the warmer months, such as capelines that matched the masks. For evening wear, there were striking floor-length red dresses for women and elegant suits for men. Metallic fabrics also made an appearance in this section, ready to shine under the moonlight.

Akris presented its collection through a video directed by Anton Corbijn, who created a perfect combination between film, fashion, and art. Lights played a very important part too, as designer Albert Kriemler proposed neon fabrics that change colors with the light and others which sparkled in the dark. All of this went hand-in-hand with the music created by
Stephen Emmer for this film. On this occasion, the designer worked in collaboration with minimalist German artist Imi Knoebel, His piece “Kinderstern” influenced clothing, such as a sleeveless onesie and a matching jacket. Kriemler also created acrylic pieces, colorful cocktail dresses, t-shirts, and accessories like scarves and bags.

Paris Fashion Week’s last day began with Chanel’s show. Like every season, the show took place at the Grand Palais, and on this occasion, the big hall was decorated with an enormous white structure with the brand’s name illuminated with lights: just like the Hollywood sign. Several celebrities shined in the front row dressed in Chanel, including Lily-Rose Depp and her
mother Vanessa Paradis, Marion Cotillard, Anna Mouglalis, Sofia Coppola, and Kristen Stewart. The collection directed by Virginie Viard was inspired by film icons like Brigitte Bardot. Without losing her focus in creating a colorful and cheerful line, she combined the iconic tweed jacket with jeans and neon t-shirts. She also included dresses, shirts, and pants in a black and white floral print, while for evening wear, she chose sparkly paillettes and highlighted the shoulders with defined lines. Models wore their hair to the side and many of them had a veil that covered their faces, which created a glamorous and dramatic vibe.

Miu Miu was the second show of the day, and starred Kate Moss’ daughter, Lila Grace Moss, who made her runway debut by opening the show. The guests were present virtually while the brand broadcasted the show live. Among the celebrities “sitting first row” were Elle Fanning, Chloe Sevigny, Addison Rae, Anh Duong, Anya Taylor-Joy, and Beanie Feldstein.  The collection was inspired by sportswear and was created under the concept of “Miu Miu Sport Club”—so the runway was decorated with lines similar to those that mark a sports field. The clothes had a classic school uniform appeal. We saw plaid skirts, blazers, and poplin shirts in fun color combinations, while shoes were a mix between trainers and heels.

Game on: @LilaMoss leads the #MiuMiuSS21 fashion show by #MiucciaPrada in the empty stadium, yet simultaneously observed by many, dubbed the Miu Miu Sports Club. Photography by @VladimirKaminetsky Relive the fashion show atmosphere now on IGTV. #PFW

For the finale of Paris Fashion Week, we were invited to La Samaritaine for Louis Vuitton’s show, where most of the
guests wore a mask with the brand’s logo that came along the invitation. On the other hand, the virtual guests could still enjoy the show, which was filmed with 360º cameras, allowing them to appreciate every detail. There were also mics to broadcast the sound live and images from Wim Wender’s famous movie “Wings of Desire” were shown. Nicolas Ghesquière, LV’s creative director, based his designs on the ’80s silhouettes, but endeavored to create a non-binary collection. The first look was comprised of a slogan t-shirt that urged people to VOTE and pleated pants. Ghesquière also combined minidresses with coats and sneakers with sequin suits. Green was a major part of the offering, not only because the walls of the venue were painted in this color, but also in the accessories like handbags, shoes, and bracelets.

First look at the #LVSS21 Show. @NicolasGhesquiere presented his latest #LouisVuitton collection at Samaritaine in Paris. Watch the Show at louisvuitton.com