The Daily Front Row‘s perennially chic correspondent Sofia Achaval de Montaigu has been soaking up the glamour in Europe. Below, she fills us in on all the highlights and the unforgettable moments that took place in Paris this past fortnight.

“From September 26, all the way to October 4, Paris, the world’s fashion capital, was home to the new Summer/Spring collections for 2023. Throughout the nine days of events, we saw the new offerings from brands like Dior, Saint Laurent, Balenciaga, Miu Miu, Givenchy, Valentino, and Chanel; all of which left a footprint on the history of fashion. Here’s your guide to what went down…..”

Under the creative direction of Maria Grazia Chiuri, the maison presented a collection that took its inspiration from powerful Catherine de Medici, Queen of France from 1547 to 1559. This influence came through in romantic dresses and corsets which were embroidered with flowers and hand-crafted 16th century-style silhouettes. De Medici was the so-called mastermind behind corsets, platform heels and crinolines, which were referenced on dresses both short and long, and pannier skirts. As well as fishnets and gloves, lace items were my favorites, in particular, the opening look. Something new was definitely denim, representing more functional clothes that answer to the modern woman’s needs. Make-up stood out due to the thick black eyeliner that crossed over the waterline; an inspiration born of a picture posted to Instagram by model Stella Lucia. The baroque stamp was reflected on the set created by artist Eva Jospin. In the middle of the hall, there was a sculpture created almost entirely out of cardboard, which took six months to complete. Chiuri also called for Dutch choreographers Imre and Marne van Opstal and their company to dance during the show. The designer presented black as one of the it-colors for Summer. Among the crowd taking it all in were Olivia Palermo, Chiara Ferragni, Blanca Miró, Maye
Musk, Iris Law, Shailene Woodley, Antonela Roccuzzo, and Cuca Travy. 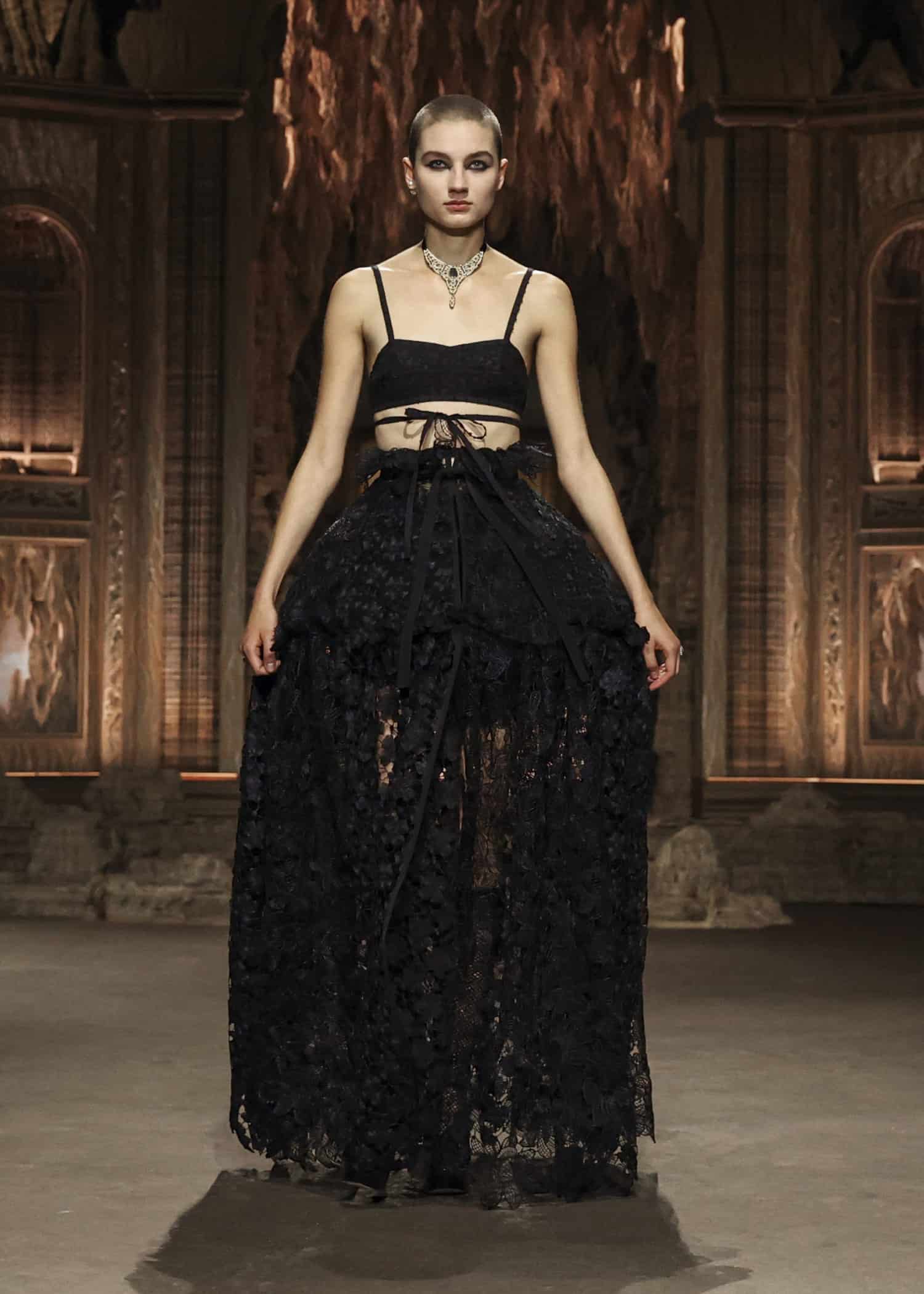 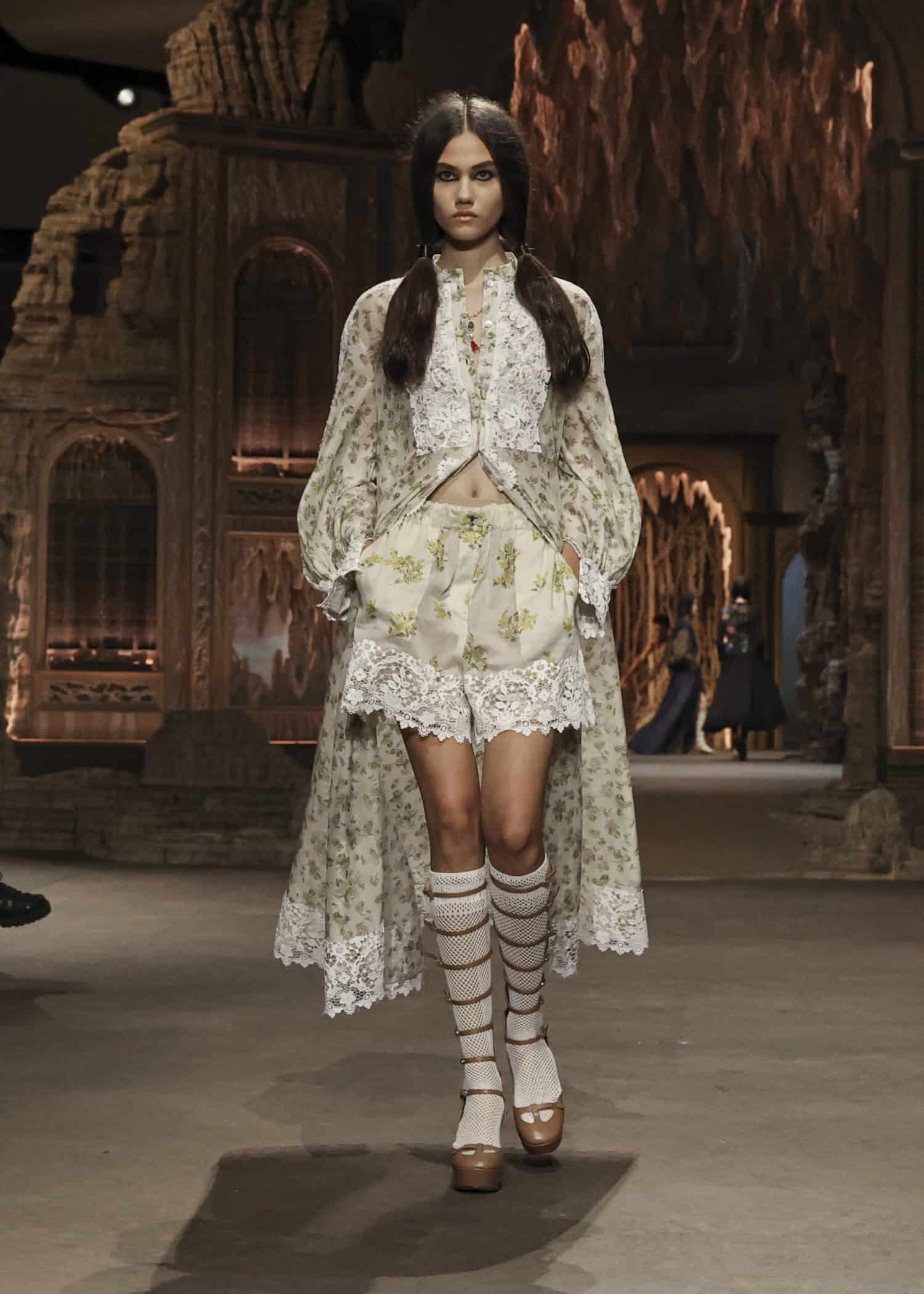 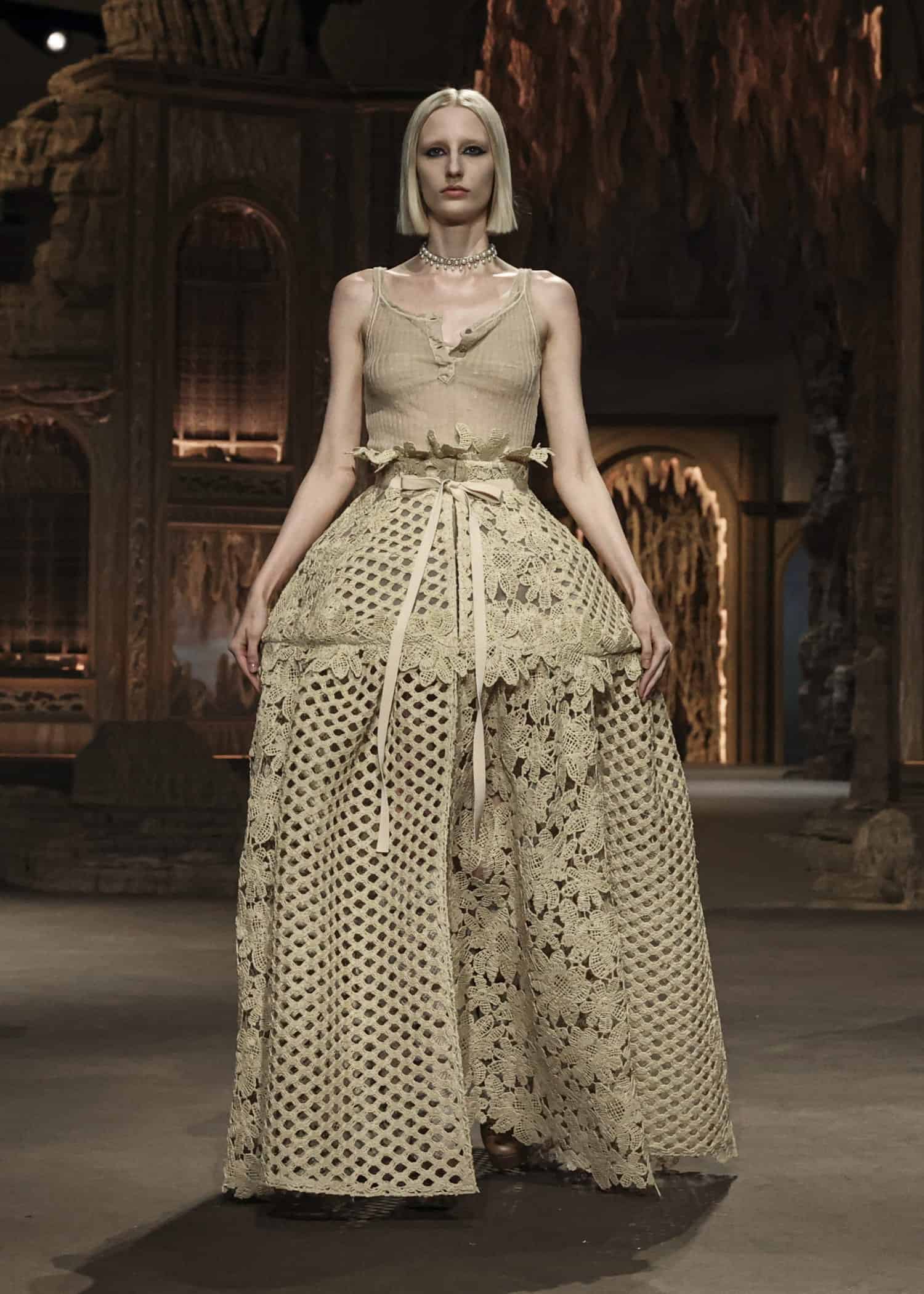 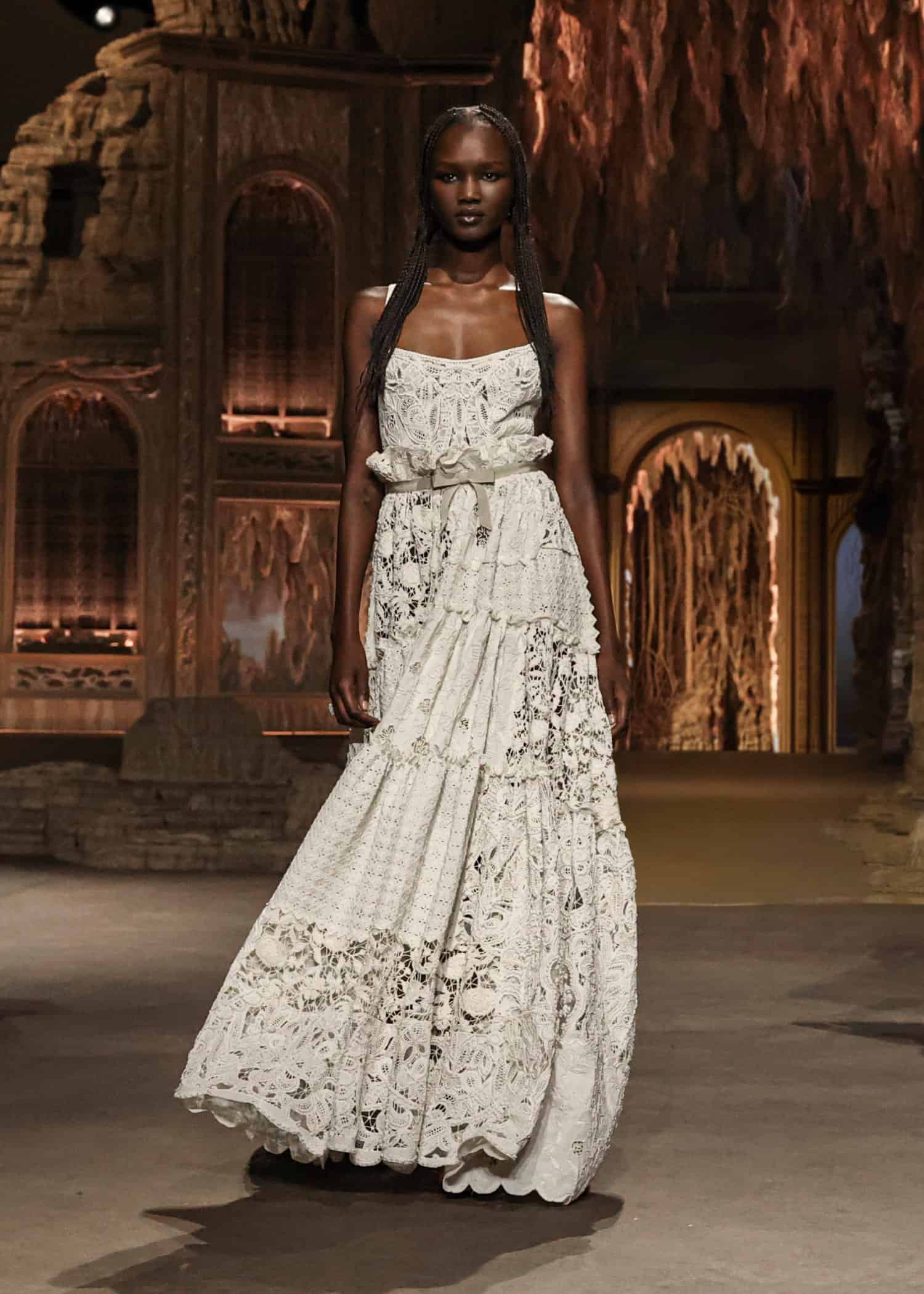 One of Paris’ most buzzed about events was Balenciaga, without a doubt. The runway was comprised of piles of dampened dirt, meaning the models walked over puddles of mud smashing each other.  Demna’s ‘The Mud Show’ included everything from battle-ready looks, dental protectors, and futuristic sunglasses. The invitation came in the form of a lost wallet that guests had to take back to an address on October 2 at 11.30AM. Ye opened the show in a cargo jacket, leather pants, lace-up boots, and a dental protector with the Balenciaga logo. The collection was full of surprising accessories: sculpture-like scarves in pink and yellow, maxi bags, and thick high-heeled clogs. Naomi Campbell and Alexa Demie were sitting in the front row, dressed from head to toe in Balenciaga, alongside Kylie Jenner who wore a bright pink knitted dress—the same version of the one later seen on the runway. 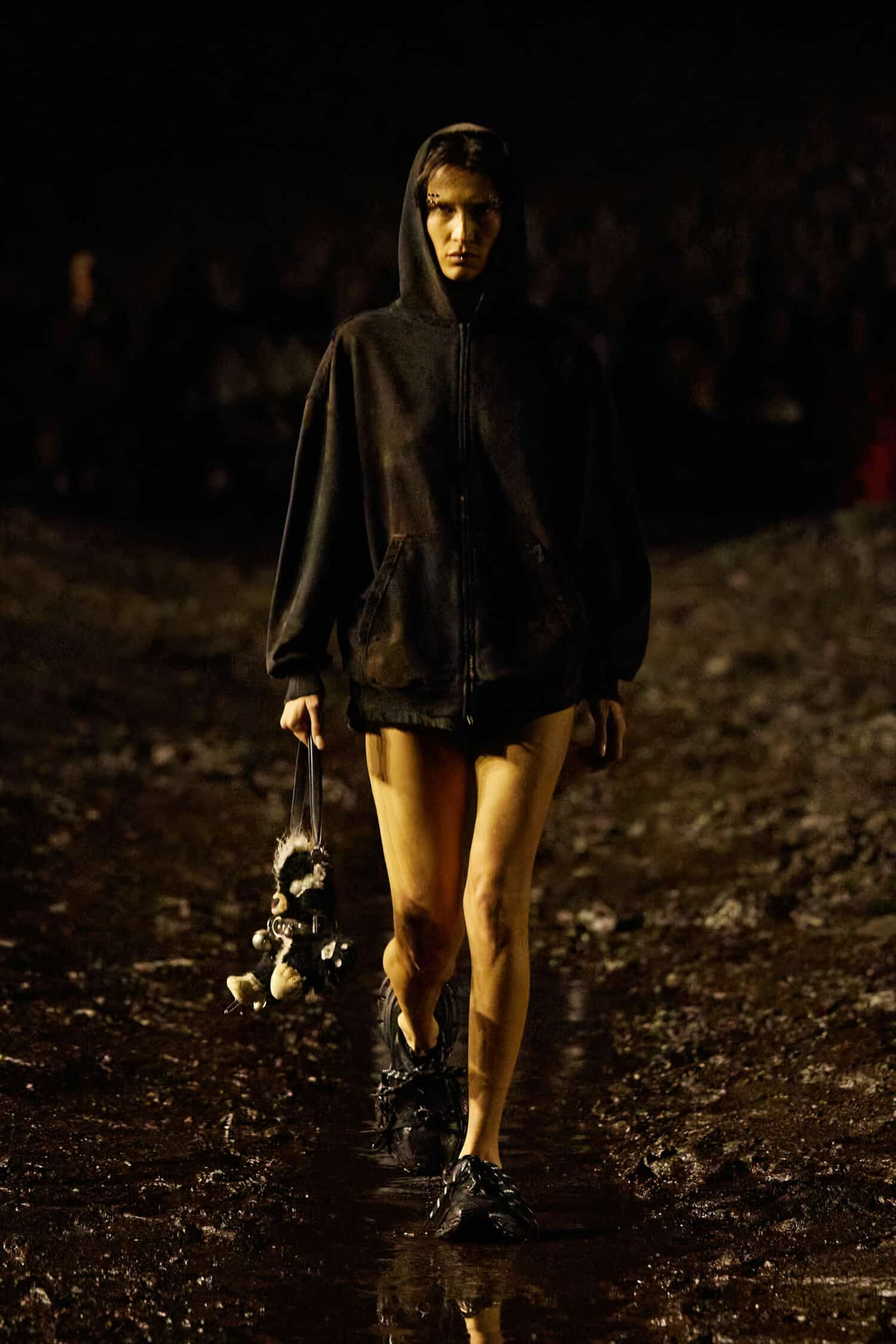 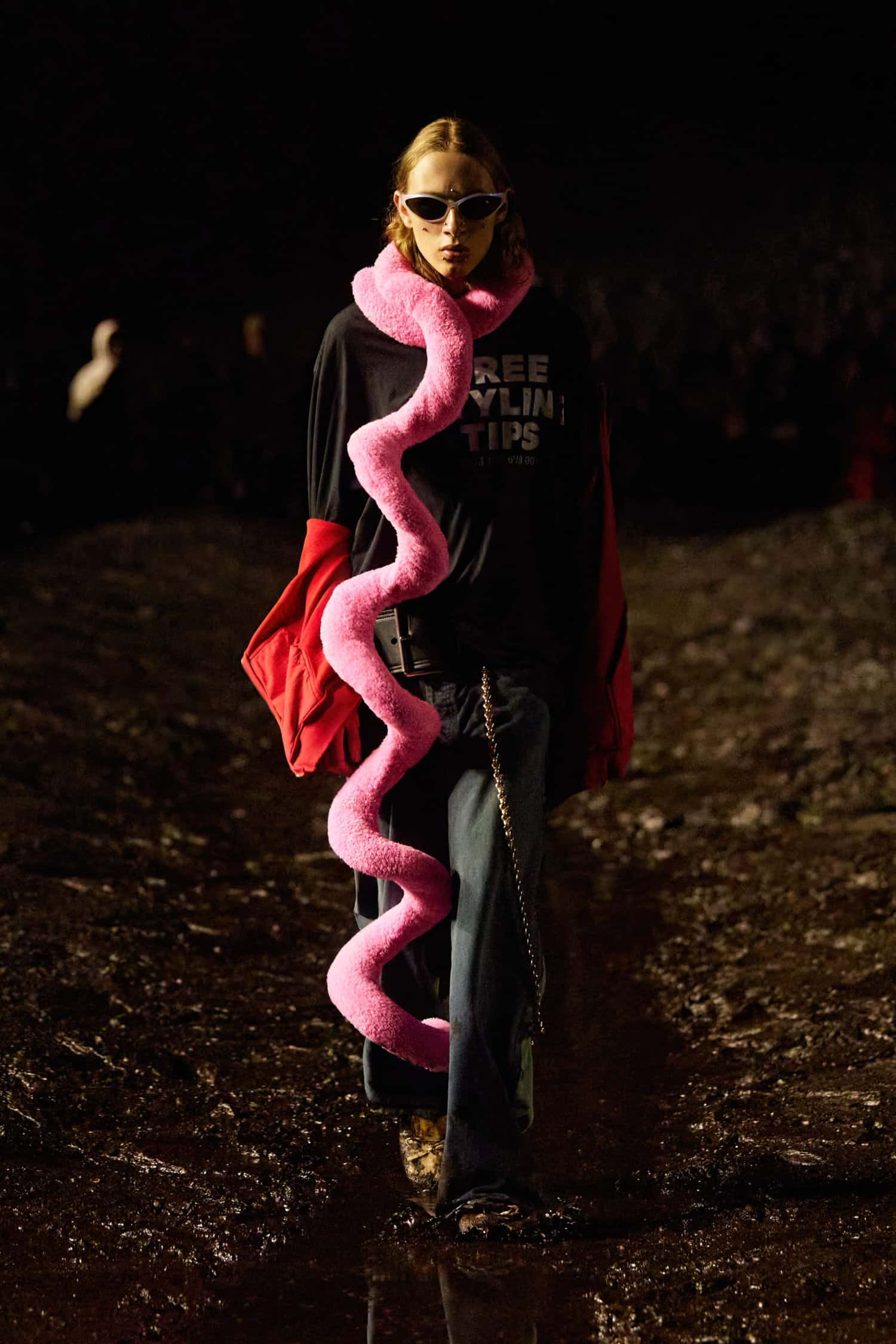 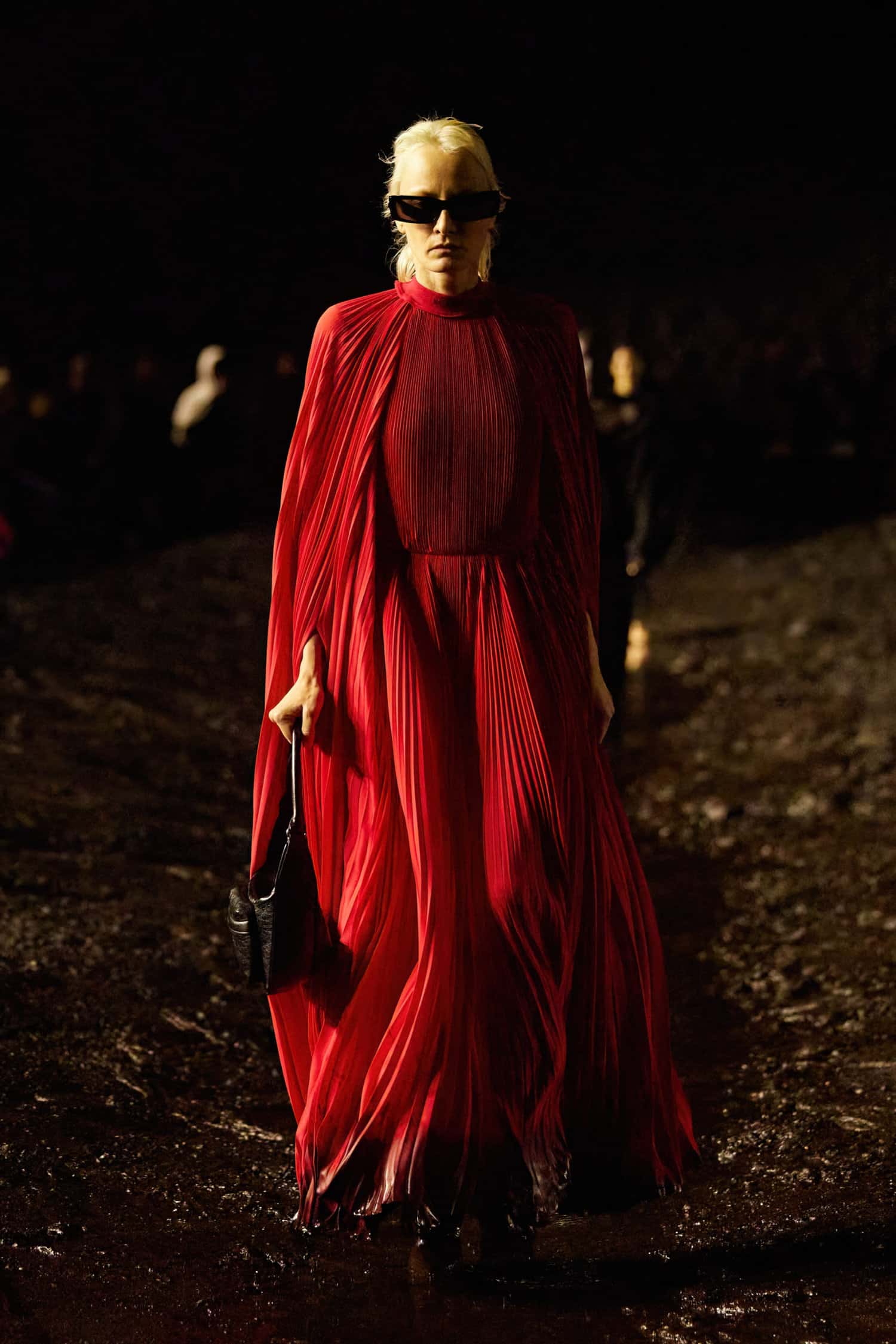 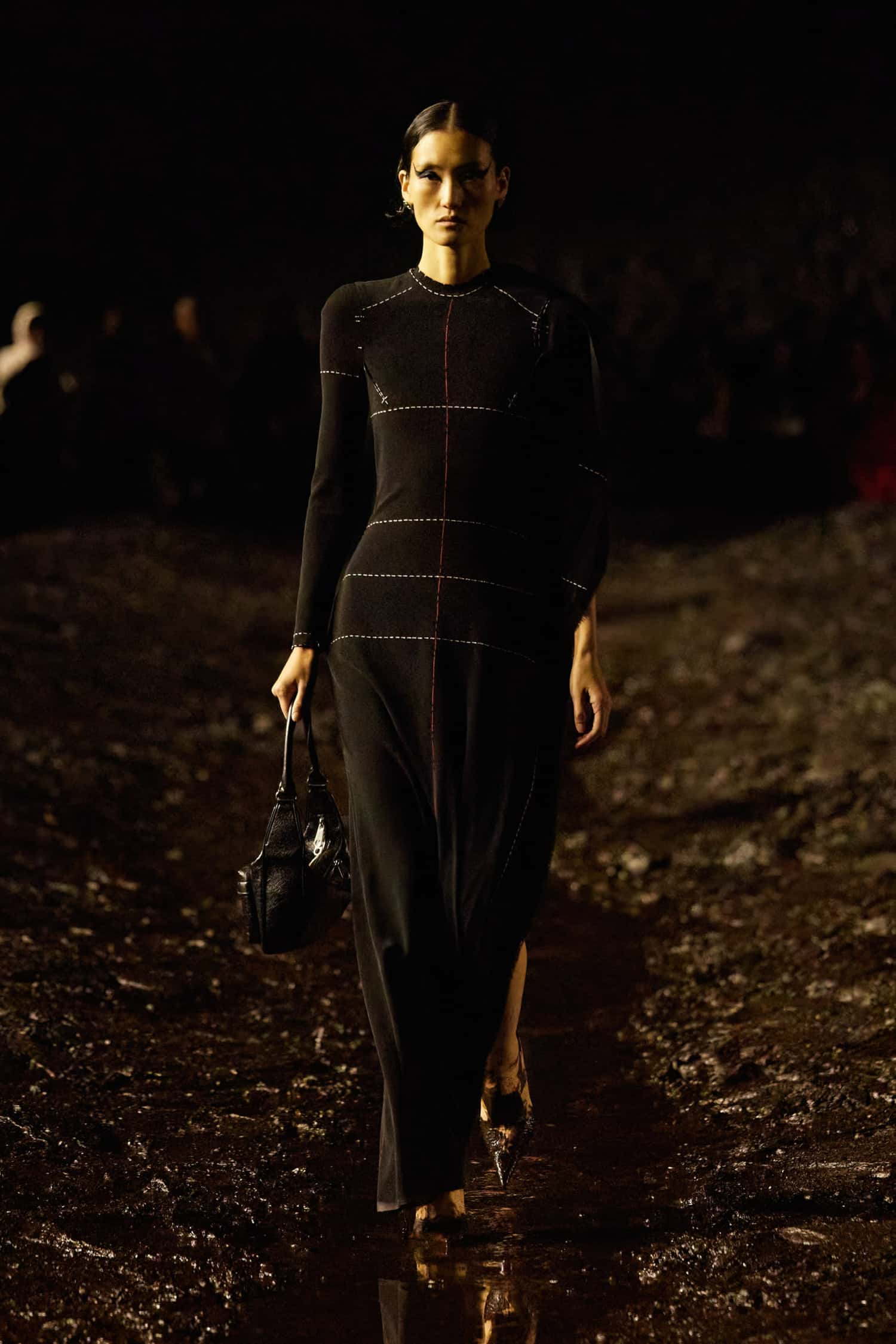 Pierpaolo Piccioli seems to have turned over the page from his latest fuchsia collection, and now, he may have created a basis for a new minimalist style in terms of shapes and color palettes. A beige graphic dress with the V logo came with matching make up covering the model’s face. Capes, feathers, sequins, and the return of the famous monogram followed. Throughout the show, he also introduced us to bright colors like yellow, green, and red. Pleated dresses were my favorites, especially a long one in the shape of a tunic in lavender. The accessories that stood out were dark sunglasses and mini bags. And towards the finale, Valentino became the real revelation: models didn’t even walk past the guests as they always do, but they walked away from the audience. At the exit, a crowd gathered hoping to catch a glimpse of the invited celebrities, like Zendaya, Naomi Campbell, Florence Pugh, Erykah Badu, and Ashley Park.

Givenchy’s show took place put in the open, at the Jardin des Plantes. The runway and the stage were made out of brown cork, creating a set where celebrities like Kanye West, Olivia Palermo, Georgia May Jagger, and Noomi Rapace sat in the front row to enjoy the show. Models walked to the beat of classic tunes like Fleetwood Mac’s Everywhere and Noise Addict’s I Wish I Was Him. Bella Hadid walked past in a matching rusty denim set comprised of low-rise wide-leg trousers, a crop top, and a matching bag On the other hand, Gigi Hadid wore a denim set, made up of an oversize jacket and wide shorts with big pockets. Without a doubt, it was a collection with a relaxed and sporty vibe, where denim items stole the spotlight alongside draped dresses tight to the body and combined with gloves.

Virginie Viard took her inspiration from Coco Chanel’s designs for the 1961 score L’Année dernière à Marienbad for her Spring Summer collection. Guests sat as if they were at the cinema, in front of a giant screen that showed scenes from the movie while the models walked in front wearing a variety of cocktail dresses that emphasized the timelessness of Chanel’s aesthetics. The feather trim of a cream dress used in the movie showed up in several outfits, from party dresses to tweed suits. The trademark feminine stamp, present in every collection, could be seen in a lacy white dress with black details in the finale. In terms of make up, it was natural and relaxed, while the hair was done up on most occasions. For accessories, big bracelets were mixed with multiple chains by the neck, and, as always, handbags were omnipresent. Sitting in the front row enjoying the show were Charlotte Casiraghi, one of the house’s most distinguished ambassadors, Kristen Stewart, Naomi Campbell, Dianne Kruger, and Caroline de Maigret. 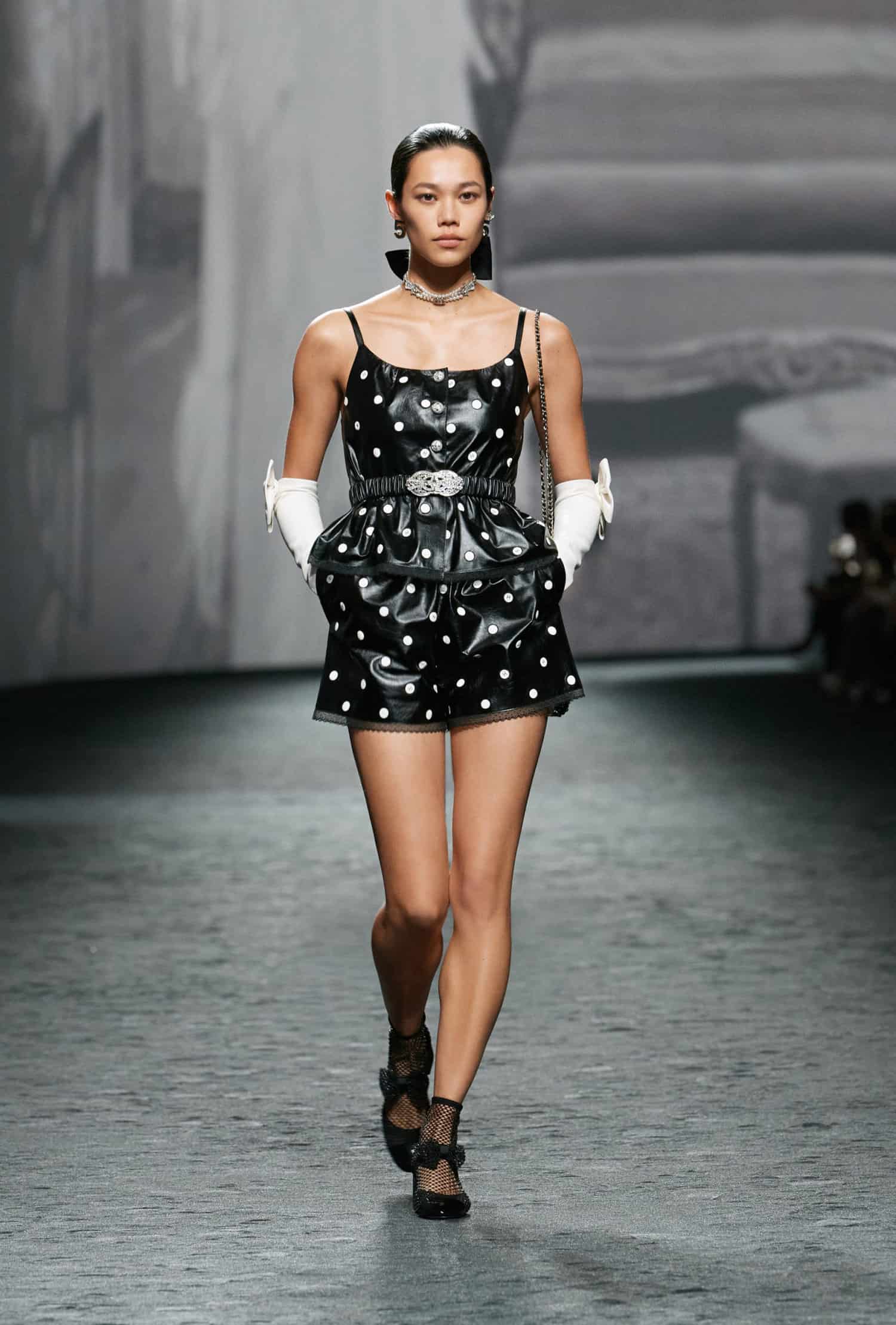 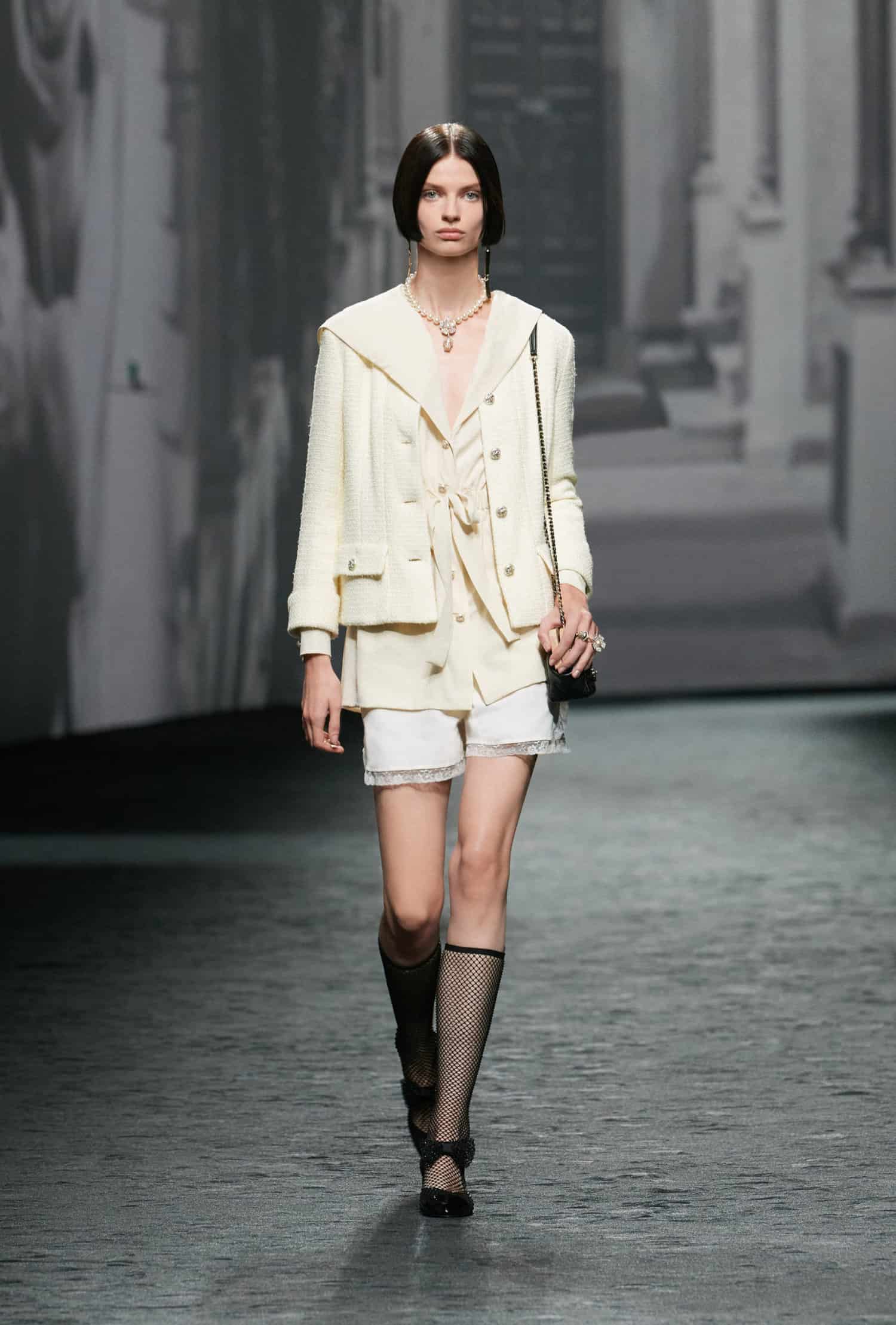 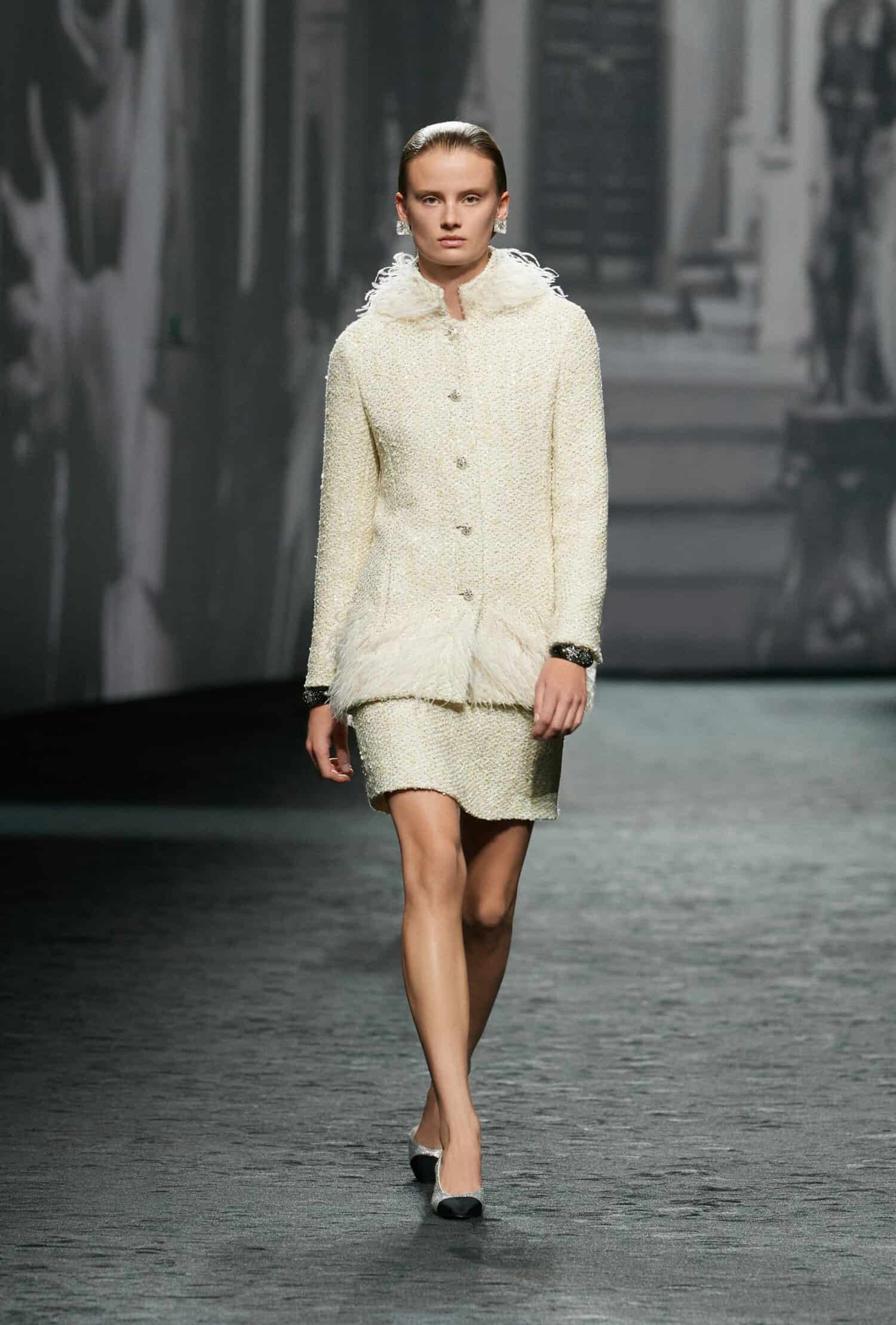 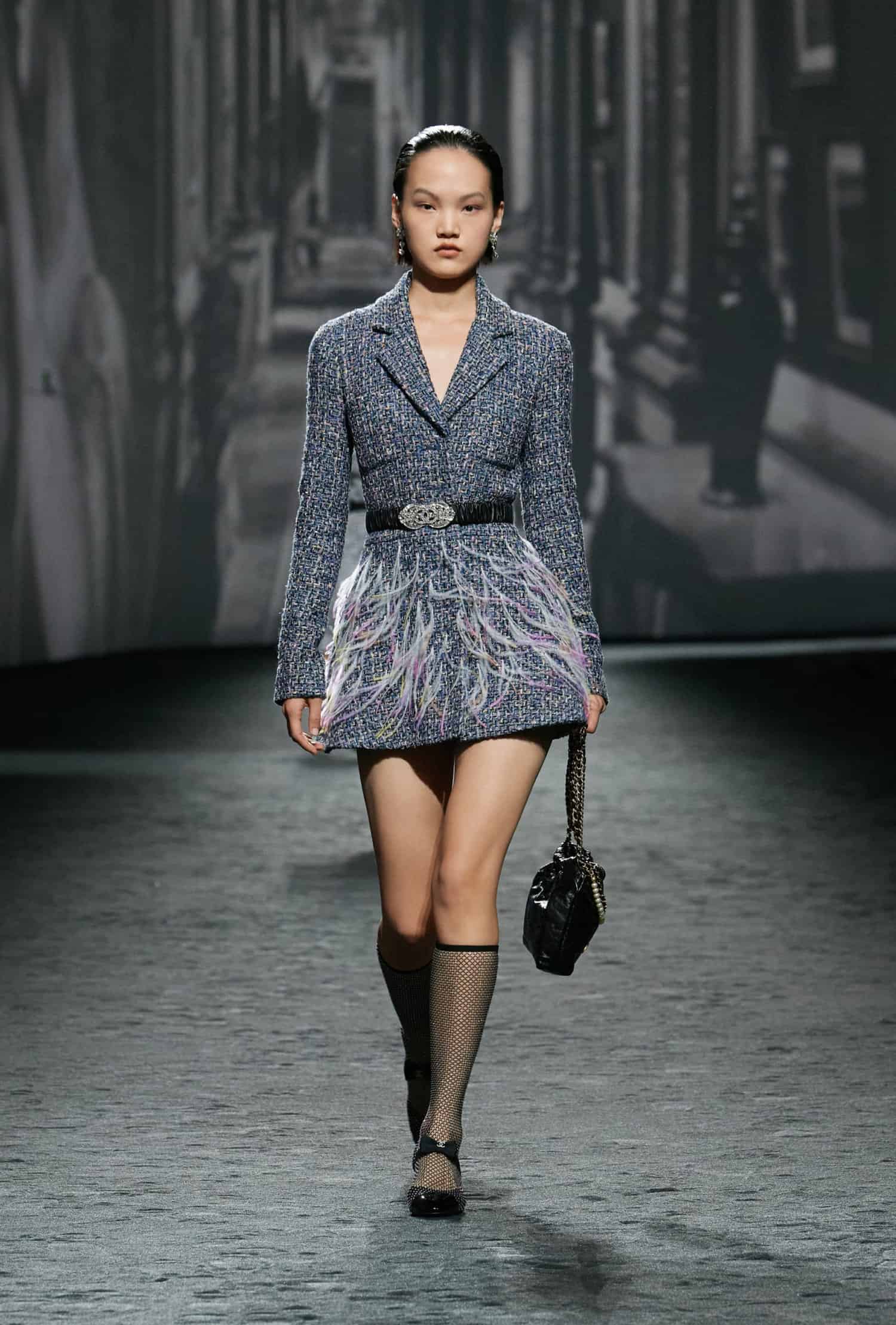 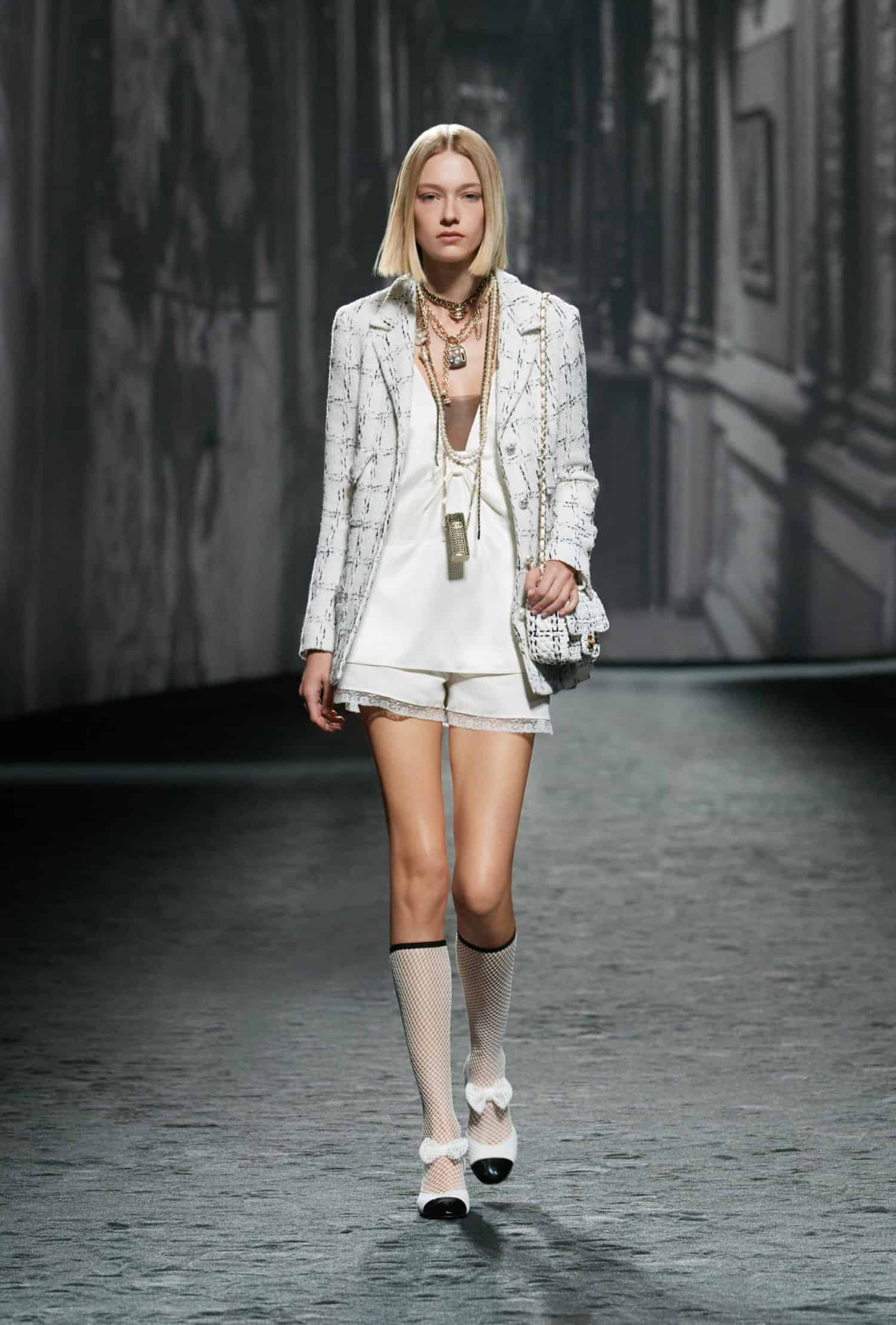 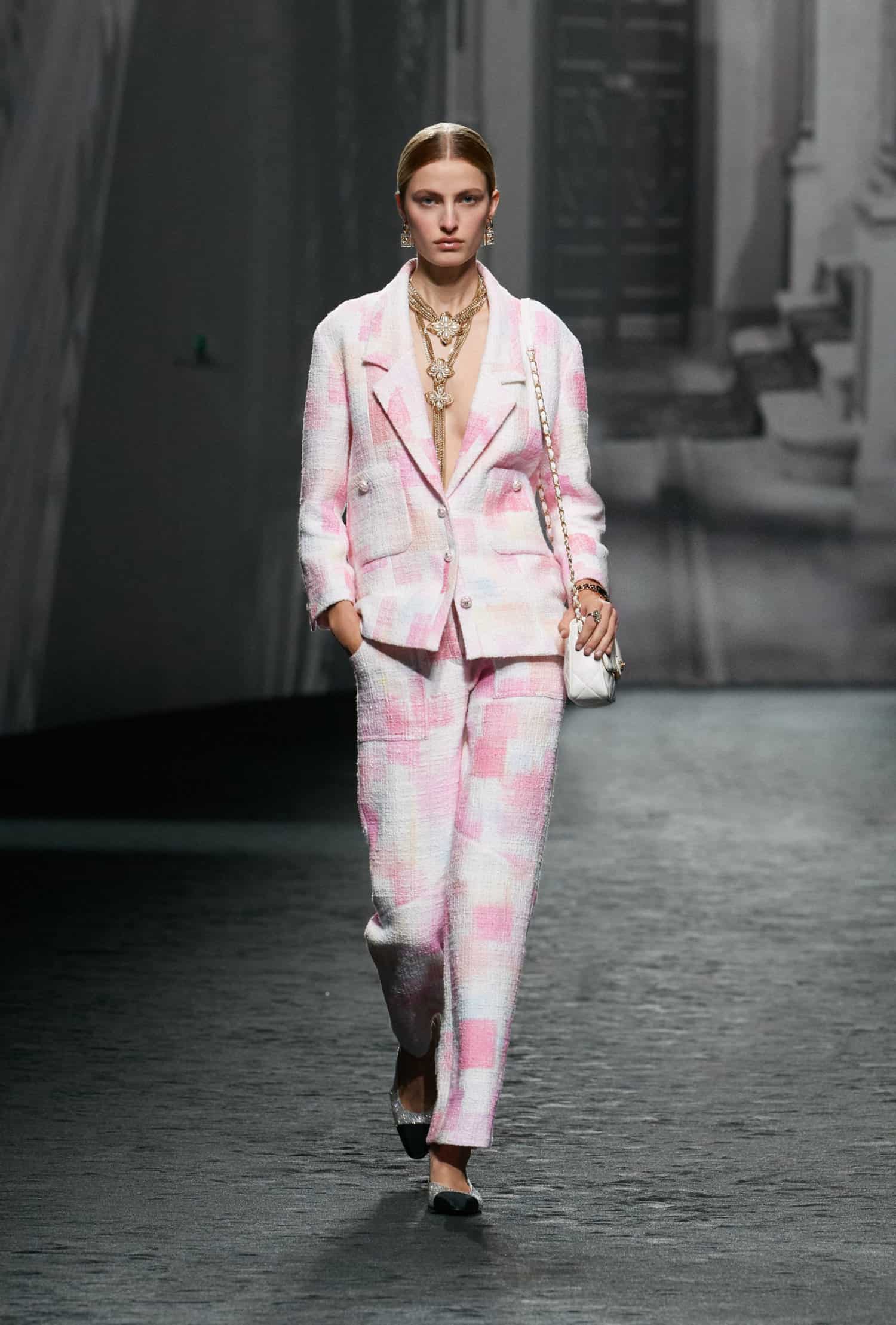 For Louis Vuitton’s new collection, the Louvre transformed into a gigantic flower that also looked like a cherry red circus tent designed by contemporary French artist Philippe Parreno and production designer James Chinlund. Nicolas Ghesquiere played with the size of the designs: low-cut dresses with big volume, little leather dresses with enormous chained shoulders, and gigantic buttons and zippers that took over the clothes. Designs were printed with different motifs like belts, while boots were decorated with sparkling colorful stones. All in all, the collection had different levels of thought and high levels of humor. Many celebrities were present, celebrating the last show of Paris Fashion Week, like Ana de Armas, Eve Jobs, Emma Chamberlain, Phoebe Dynevor, Maude Apatow, Jaden Smith, Milly Alcock, Sophie Turner, Joe Jonas, and Janet Jackson. 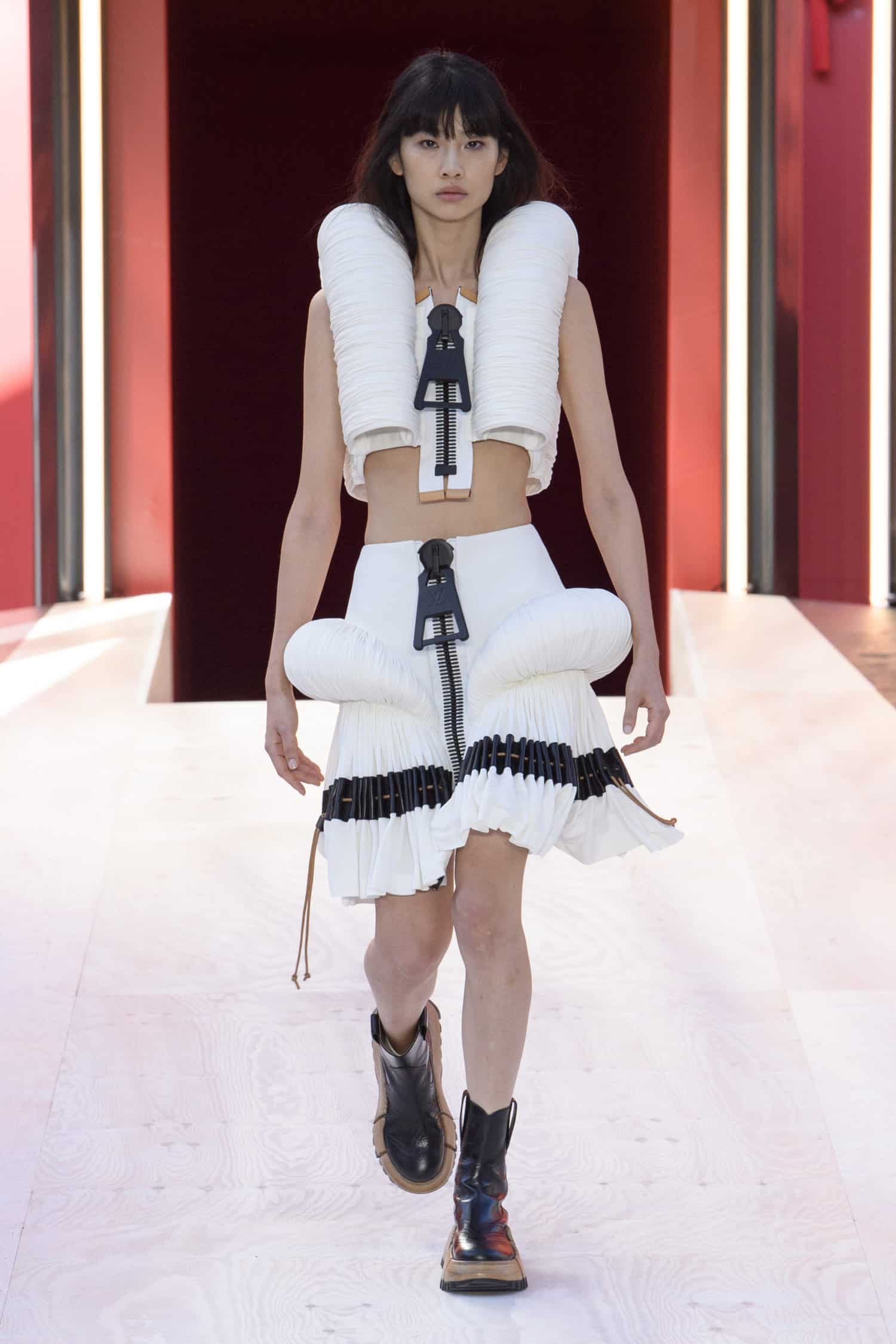 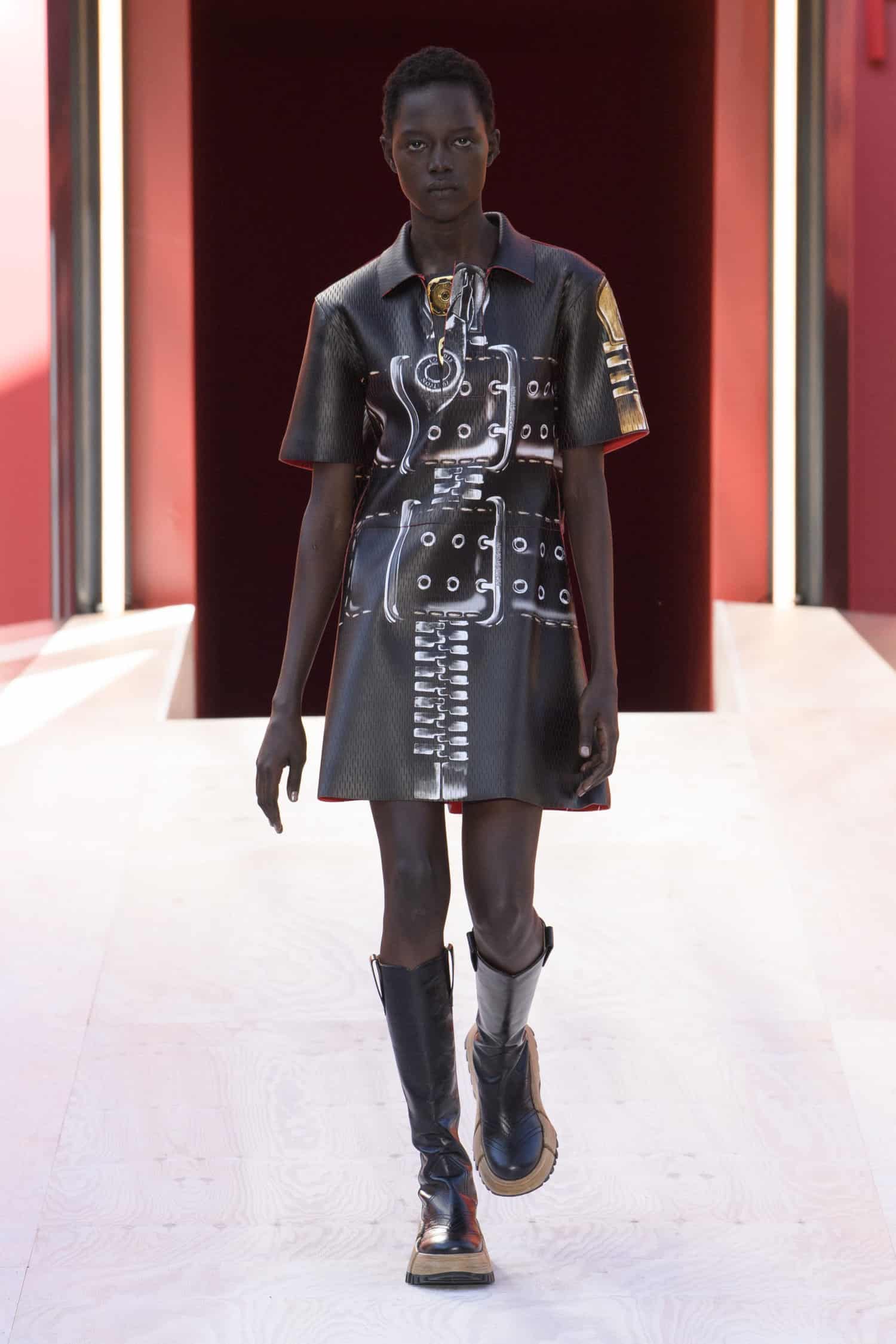 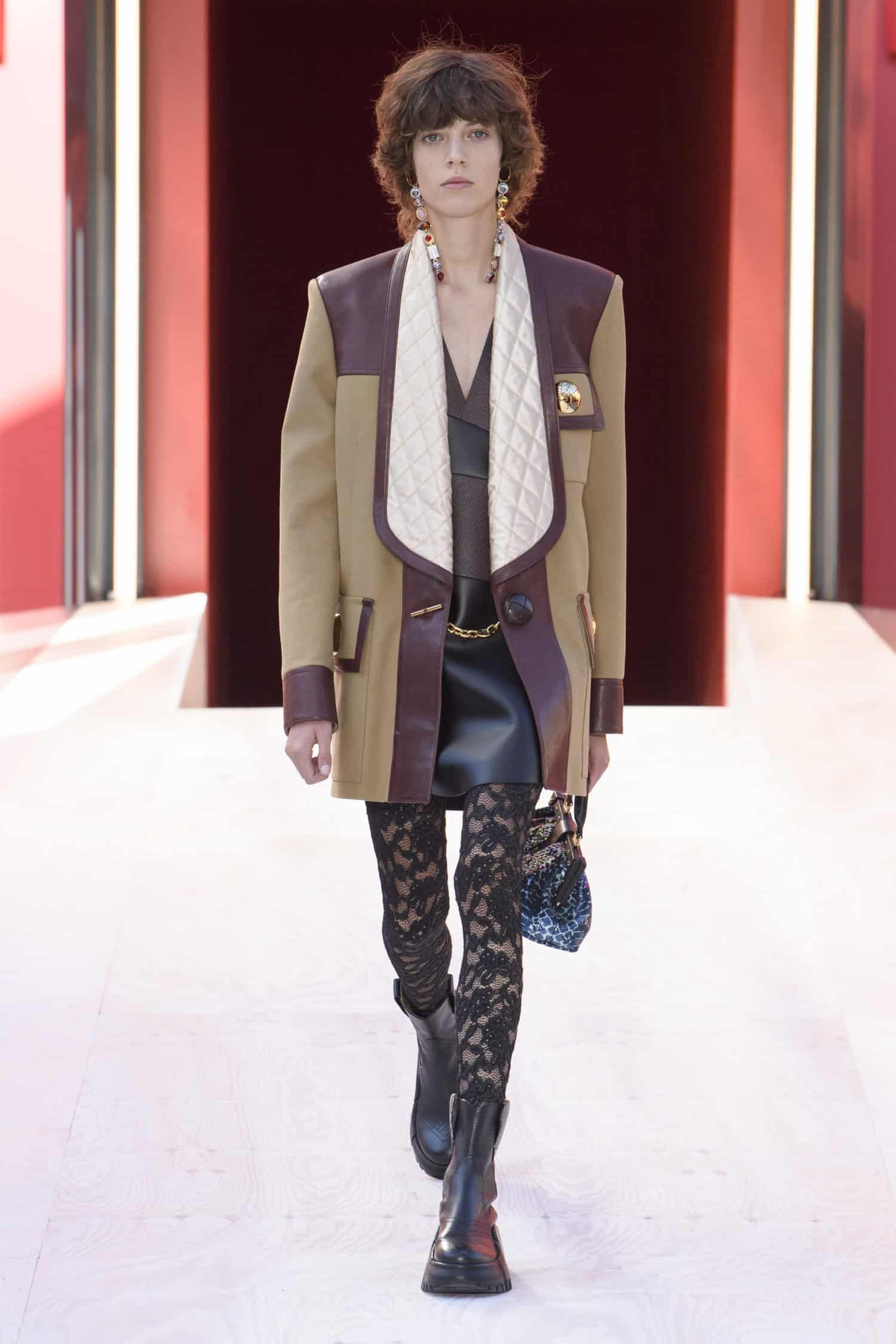 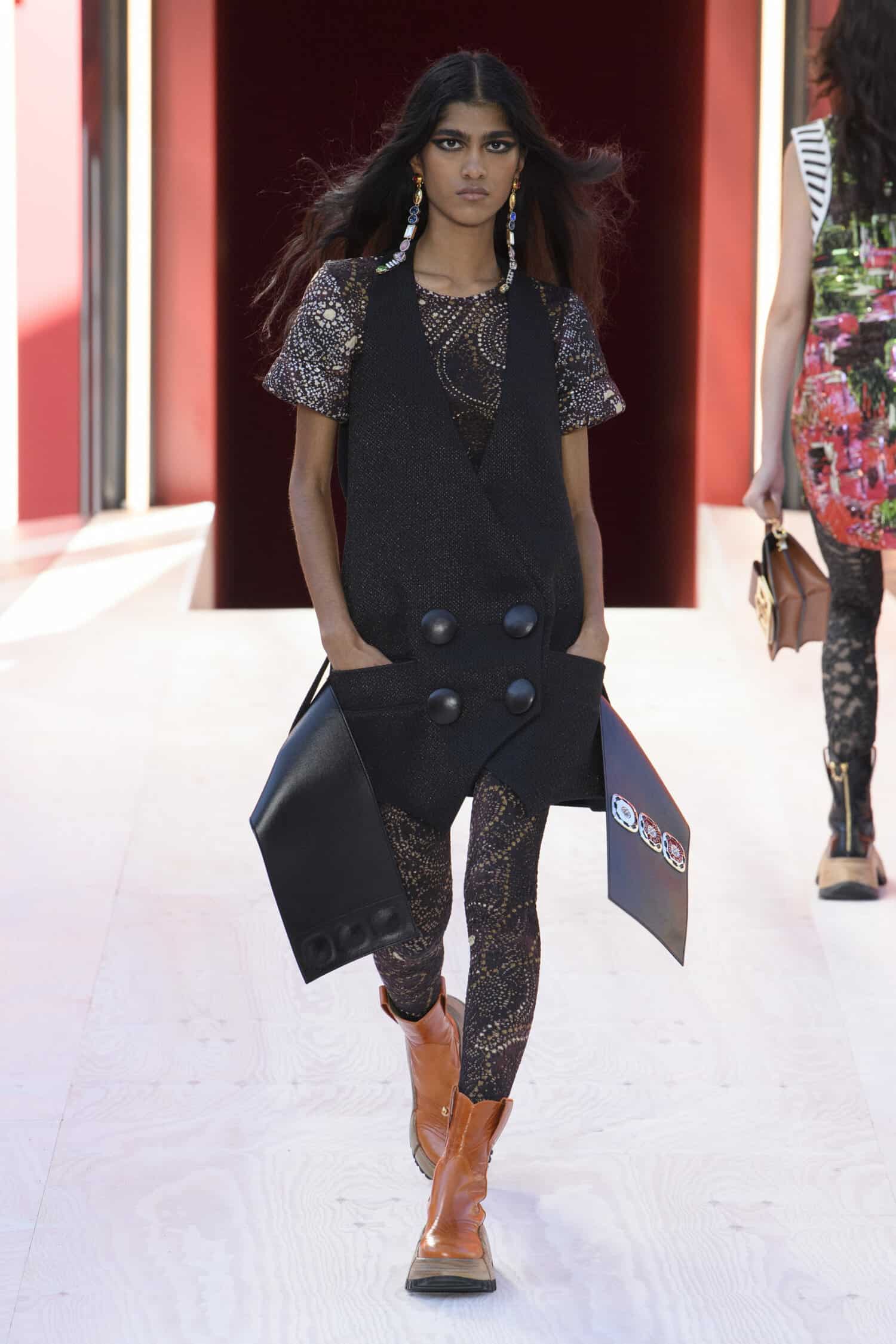 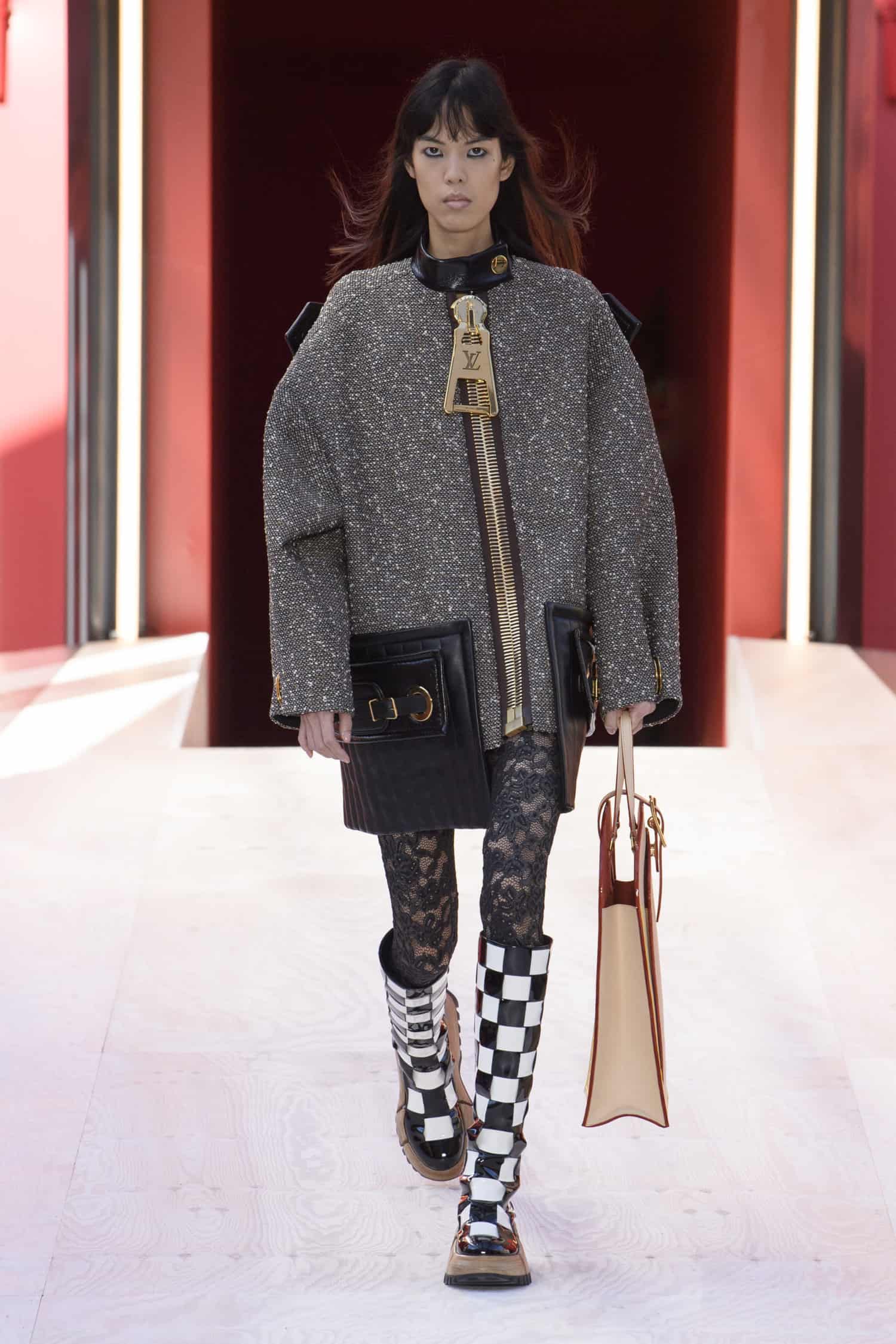 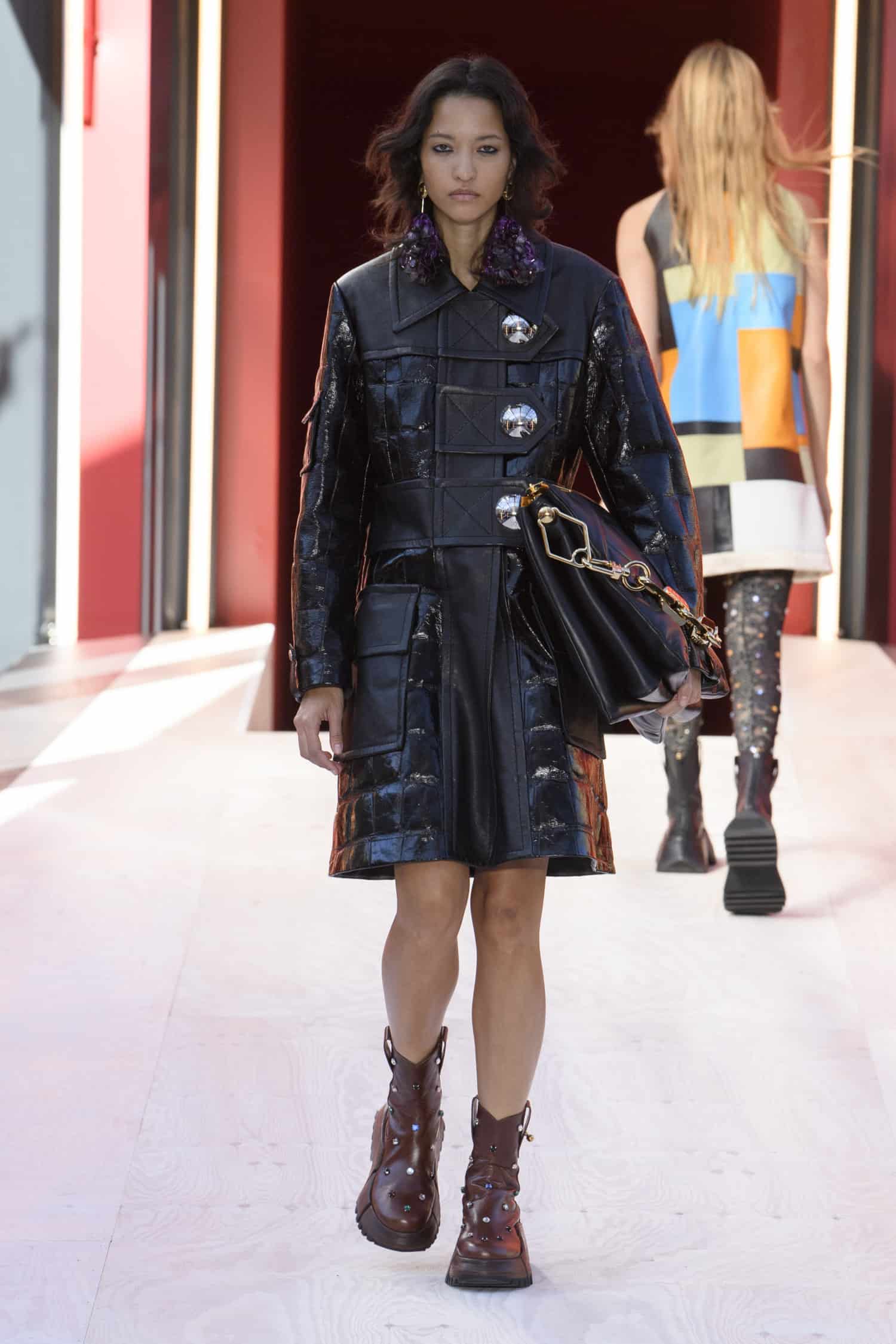