Sit Down, Katie Sturino Wants To Talk To You About Embracing Your Body (And Living Your Best Life) 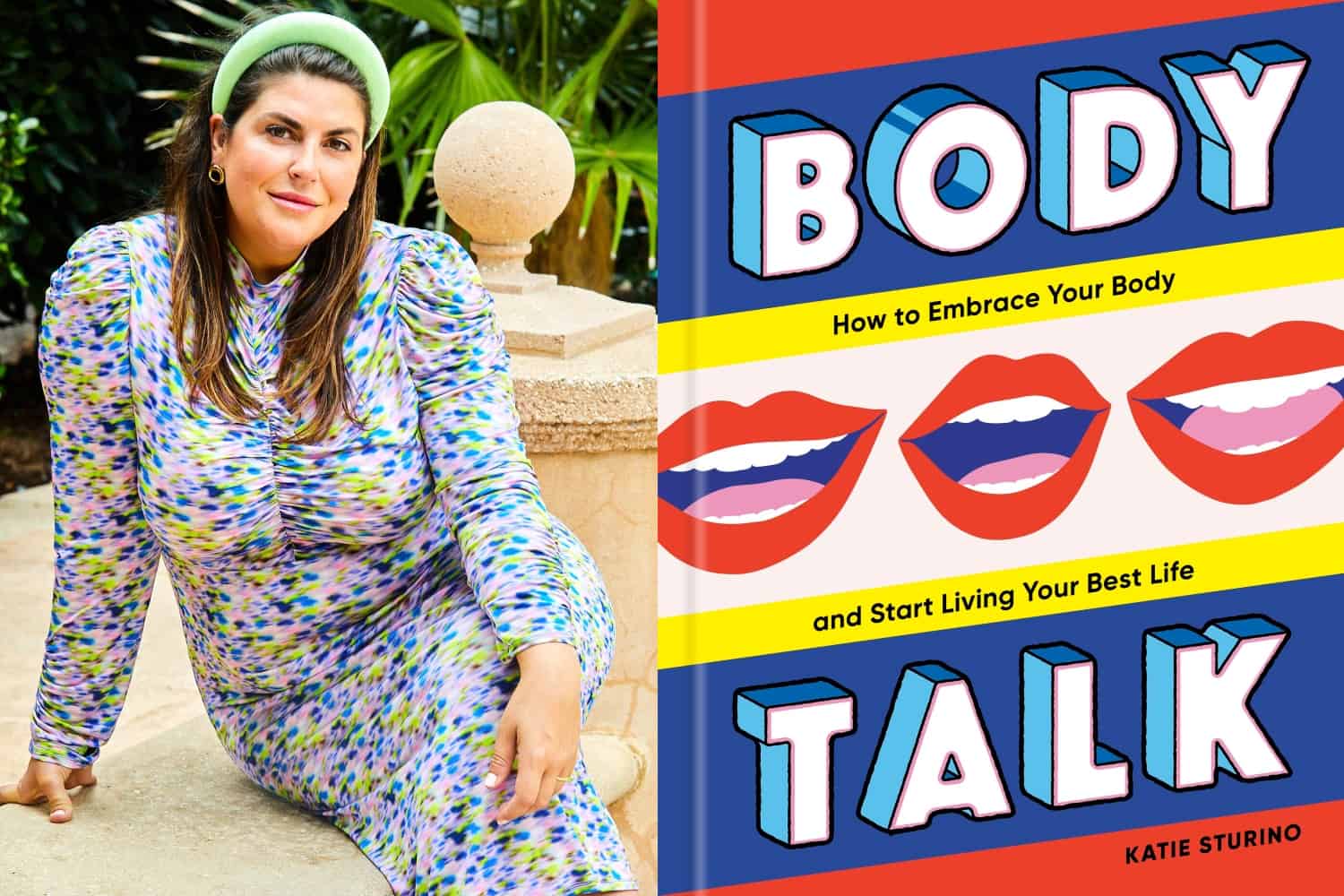 If you’ve ever had negative thoughts about your physical appearance (read: if you are a living, breathing human), then this new book is for you. Conceptualized by the Internet’s favorite body positive hype woman, Katie Sturino, “Body Talk: How to Embrace Your Body and Live Your Best Life” is a blueprint to leaving behind punishing self-talk and finding true confidence in your whole, multi-faceted self. We caught up with the true Renaissance woman—she’s the founder of popular fashion blog The 12ish Style, host of the podcast BoobSweat, brains behind clever beauty brand Megababe, and instigator of goodness knows how many viral hashtags!—to get the lowdown on her first major book.

Tell us about Body Talk…it’s a workbook, what made you take that approach?
My approach to everything is to make it fun and give it a sense of humor. Especially when it’s a topic that can feel emotional and heavy. I wanted to give the book lightness, color, and illustrations. It’s very me, because I’m very playful and I don’t take anything too seriously!

How did the book come about and how long did it take to come to fruition?
It was really fast. We started in January 2020, then the pandemic hit. We turned the book in during early summer, so it came together really quickly. I did find it hard to focus, but it was nice to have the outlet. I did a book with Harper Collins called “ToastHampton” back in 2016, about my dog. So I got to see the process [before], but this has been nothing like that! This was fun, but it has a much larger implication. Hopefully. I came at it with a lot of hopeful promise to help people. I worked with one of my best friends, Amelia Diamond, on it. She and I work well together and we had a great time.

Do you have any events or launches planned to celebrate?
I haven’t planned anything like that, but I think it’s becoming ok to do that again. I do love connecting with people in person.

What was the process like writing the book? Did you find it therapeutic?
It’s not a memoir but I include some personal stories in there. I was surprised at how emotional some of the stories and times in my life made me while bringing them out. As someone who champions themselves as a role model, it was interesting to see I was still susceptible to having those feelings. The key is that you may never stop having those thoughts, but the recovery time gets shorter.

Who do you want the book to speak to?
It’s truly for all ages. It’s for anyone who’s on a rollercoaster of cleanses, crash diets, dry Januaries. It’s for the mom with a daughter, who’s 13-years-old. Eating disorders are developing early and earlier. Body image issues are coming up when kids are eight or nine. It’s for moms themselves, so they get through their own body images and stop hammering them into their kids without realizing it. One thing I want everyone to take away from the book is that your body is not the problem.

You’re from Milwaukee, how did you make your way to New York and did you always know you wanted to get into fashion?
I love style—to give you a totally generic answer! I love clothes and the aesthetic. But I did find out that that whole concept gets really fucking old. Especially when you’re working at a place that sucks and the people suck. My size has not been welcome. Even at my smallest, I was not the industry’s target size and I wasn’t seeing myself in advertisements or campaigns. I never lost my love for fashion, but I definitely backed away from trying to work in the industry, at a big agency, or in a brand.

Fashion has changed so much, what’s one thing you miss about when you started out in the industry?
I would say that something I’ve discovered as I’ve gotten older is that when you’re 20-years-old, you look at a designer and model in a different way. The longer you’re around, your peers become those powerful people. It becomes less magical! You know too much!

Like seeing behind the curtain in the Wizard of Oz! What’s one change you’re glad to see?
We are so much more inclusive. As someone who never saw themselves, it’s really refreshing to see. Even Madewell is showing their clothes on different sizes now!

You’ve built such a great presence on social media, what’s your favorite thing about it?
I love talking to people. I’m pretty bad at commenting back on posts, but people can’t see how active I am in my DMs! Girls are like, ‘Should I break up with my boyfriend?’ or asking personal advise. Or talking to someone who is saying they’re wearing a bikini for the first time because of me.

You’re so well known for your site, 12ish Style. I’m wondering if you think it’s still worth setting up a website, or should content creators mainly focus on social media?
I actually tried to stay no to it and stop posting, because I though no one is going on there. But if you’re trying to make money from affiliates, you actually do need to have a website. You don’t make the same [not using a website], I still get lots of readers on mine.

Why do you think you’ve stood out?
I would say…I don’t know! I don’t know why things work and don’t. What makes me unique in the body positive/acceptance space is that I have a different sense of style. It’s a more traditional fashion sense. I’m not as trendy as some people on the internet, which I think can work in my favor sometimes. Classic styles aren’t necessarily traditionally shown on big bodies. I think everything shown is very trend-driven. Another reason is that I keep it very positive. I don’t talk shit about brands or people. I don’t do gossip, I don’t take people down, and I don’t talk about diets or weight loss. I think you can get all of that stuff very consistently elsewhere on the internet.

What’s coming up for you?
It’s Megababe season! As soon as the temperatures go up, that’s when you need Chafe Stick! We just looked Dust Puff for under your boobs too. We had a super busy spring, with other recent launches like Magic Powder, Chest-o Presto, Toe Deo, Repair Care, The Smoothie Deo, and The Green Deo with Chlorophyll. We’re also working on new scents of Power Wash!

Body Talk: How to Embrace Your Body and Live Your Best Life launches Monday May 25.

Is This “The End” Of Jean Paul Gaultier?! A Look Into The Brand’s Mysterious Social Media Update…