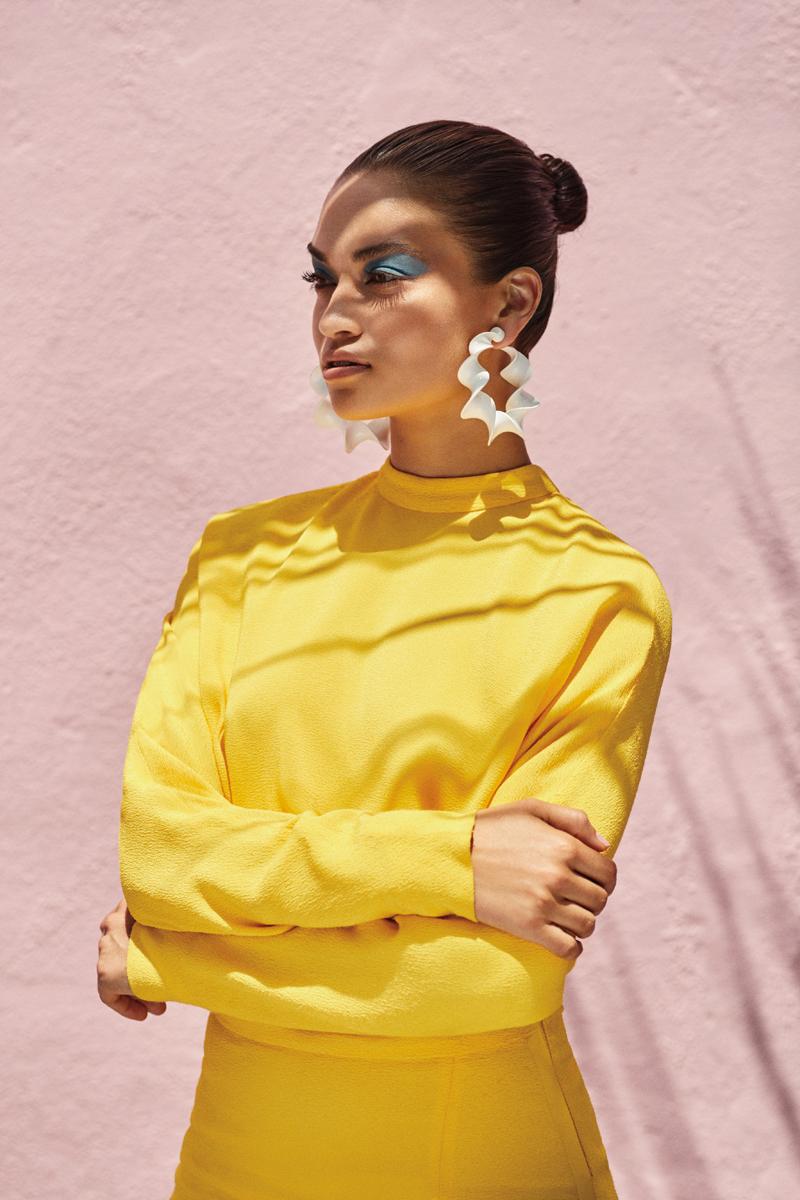 Whether she’s walking down the runway for Victoria’s Secret or rocking Azzedine Alaïa in these very pages, IMG model Shanina Shaik has become the queen of versatility. No wonder Hollywood is calling with her big-screen debut in this month’s The Mummy. The Australian beauty tells The Daily Summer how she’s shaking up the world.

What were your summers like growing up in Australia?
I was always going to the beach, because it’s so hot. The great thing about the summer was that the sun wouldn’t go down until around 8:30 or 9 at night. The beaches would be so packed that you couldn’t move. Getting fish and chips on the beach was always a treat. I have a huge fear of sharks and don’t really go into the water now, but as a kid, I had no fear, so I’d swim far out.

What brought you to the States?
When I was 17, I decided to go on a reality show, Make Me a Supermodel, which was my mom’s idea. Unfortunately, my look in Australia wasn’t very accepted, and it was really hard for me to book jobs. If I won on the show, I’d get a contract in New York City with [agency] New York Models. I was very shy, even more so than I am now. I ended up as the runner-up which was devastating, but when the show stopped airing, I got a [modeling] contract in New York City. My plan was to go for three months.

What was that like?
I had never seen snow in my life! I remember arriving at the models’ apartment: No one was there, and I was super scared. The next day I went straight to castings, and I booked my first job…for a lot of money! I took that as a sign. By the time I was 18, I was living in my own apartment! After about two and a half years with the agency, I decided that I wanted to transition and do more high-fashion work. A lot of people were telling me that they didn’t see me doing high fashion or that I couldn’t because I was “too sexy.”

How did you overcome that?
I moved to another agency to work with Stephen Lee, who had worked with Miranda Kerr for the longest time. He took me under his wing. My body also changed—the baby fat went away from my face. Then, when I was 20, I booked Victoria’s Secret. My first show in Paris was Chanel, and then I walked for Tom Ford, Stella McCartney, Jason Wu, and Oscar de la Renta.

What has the VS relationship meant to you?
Any girl in the industry knows that if you book Victoria’s Secret, it will change your career. It’s a great family, and the show is like no other! They really push the girls to show personality and to smile.

Do you get nervous walking?
Always, but I have an adrenaline rush when I’m about to do the show.

While we’re on the topic…what’s your workout?
I like to work out five or six times a week. I never miss out on more than three days. I do yoga and Pilates, and for cardio I like cycling.

What about skincare?
I’ve been moisturizing since I was very young. My nanna has great skin, and I always used to see her putting on moisturizer. I use Manuka honey, and it has a healing agent. At night, I cleanse, tone, and use moisturizer. Maybe eye cream every now and then. I get facials once a month.

Where do you go for facials?
I’m bicoastal, so I go to Skin Thesis in Los Angeles, where I get the runway facial, which uses a warm laser. They cleanse and tone your skin, and put oxygen on it as well.

Why are you bicoastal?
My fiancé [Gregory Andrews, also known as DJ Ruckus] is based in L.A. I’m based in New York, but in the long-term, I see myself moving there. Now, we go back and forth. When I first started dating Ruckus, I never really had jobs there, but now jobs keeping coming up on the West Coast. I also have a great group of girlfriends there.

When are you getting married?
Soon! [Laughs] We’re still in the planning stages, but it’s on a beach, which I’m really excited about. My dress will be custom-made.

What are your other passions?
I’ve been acting, and I really enjoy it. I just finished a short film, and I have a small part in The Mummy, which is out now. I’ve been working with an acting coach, and I’ve gotten good feedback. I definitely want to do more movies.

Did you work with Tom Cruise?
No, but I met him and he’s a really, really nice guy.

We understand you consider yourself shy…
I’m super shy! I can be very quiet—I’m observant. People might think I’m a bitch, but I’m not—I’m taking it all in.

How do you deal with your shyness on sets?
It’s kind of like having an alter ego—you do what you have to do. On the runway, you just become a character, and when you are off, you’re yourself again. You become what the client or designer wants, and I want to create a beautiful picture.

Do you have any model besties?
Jasmine Tookes has been my bestie for the longest time. Lais Ribeiro, Nadine Leopold, Taylor Hill, Josephine Skriver—they’re some of my closest friends.

What are your plans this summer?
I want to travel a lot. I’ll be in the Hamptons—I think my fiancé is going to play at Surf Lodge. I love the Hamptons; it’s a great getaway from the concrete jungle. I’m also planning to go to Greece, and heading to Burning Man with Jasmine. I’m always on a plane!

What’s next?
I’m at a place in my life where I’m transitioning. People are asking me when I’m having a family, which is so weird! I’ve come to that point in my life? Wow! I plan to do that soon. Before I’m 30. I let Ruckus know!