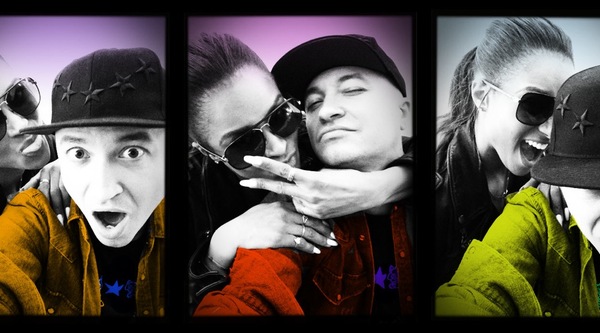 What a week for Sergio Kletnoy! The right-hand man to Cosmo editrix Joanna Coles not only had a revolving door of fab visitors at the Hearst Tower, but a Blueprint cleanse tested his sanity. It’s all here in another episode of your favorite Friday read…

For the last few months I ate everything in sight: casually munching on salt & vinegar chips, popping See’s chocolates in my mouth as if they were Tic Tac’s, scooping Talenti ice cream by the pint and drinking Cherry Coke like it was Smart Water. So before I start to resemble Cartman from the front and Nicki Minaj from the back, I decided to cleanse my bod and juice for the next three days. Three blueprints in I felt alive and clear-headed. The next three gave me energy and a new outlook on life. I thought to myself, ‘I can do this. Three days without food – no problem!’ While THE BOSS was getting honored at the 2013 Matrix Awards, over a three-course gourmet meal at the Waldorf Astoria, I had a new perspective on life with a green juice in one hand and all of the junk food in my trash. When JoCo came back to the office after the awards for a Hearst cocktail party in honor of Matrix, I avoided the temptation of drinking and stuffing my face with finger foods. So I opted out of celebrating and stayed behind working. After all, someone had to make sure the details for JC’s trip to LA, SF, and DC for the next six days were taken care of so that I can finally get a little peace and quiet and catch up on more important things while THE BOSS is gone: like the 4th hour of the Today Show with Kathie Lee & Hoda…

I woke up agitated and dizzy, craving bacon and eggs. After tossing and turning for the next 10 minutes I reminded myself that at 54 years old, Madonna works out for two hours a day, six days a week, and that tiny window of weakness inside my head was sealed shut. I was ready for day two of juicing. In the next five hours I drank four coconut waters and two beet juices. The sweet aroma of mac and cheese, served at the Hearst café, was not going to ruin my mood. I decided to exist in a world free of junk-food, and god dammit, I was going to stick to this plan come hell or high water. Later in the afternoon Ciara came by the office to play me a few songs from her fifth album. She looked flawless, rocking a Dolce & Gabbana leather jacket, DL1961 jeans, Gucci shades, and Doc Martin’s. CiCi and I go way back. We’ve know each other since her first single, “Goodies.” She’s come a long way and I’m loving the more mature Ciara – all grown up, super sexy, more stylish than ever before and madly in love. There are some killer pop songs on the new self-titled album, with a little help from mega producer Rodney Jerkins, as well as appearances from Nicki Minaj and Ciara’s new “man-friend” Future. C’s new single, “Body Party”  is So. Damn. Steamy! If you haven’t seen it… YOU. MUST. WATCH IT. You’ll need a cold shower right after!

On the third day of Blueprint I gave in to my cravings for something chewable. Goodbye Blueprint, hello Balducci’s. Oh how I missed the sweet taste of all things non-liquid. I couldn’t look at another bottle of green, clear, or beet-colored liquid mush and bought a roasted vegetable soup, turkey and Gouda sandwich, tomato and mozzarella salad, and pomegranate peach passion white tea. So much for having self-control. For the rest of the day I felt happy and energized, especially when Miley Cyrus’ fave bad boy rapper, KaptN, came by for a visit. Miley appeared in his insanely catchy music video “Juice” and if it’s good enough for Miley, it’s good enough for me. A few hours later, one of my fave singers, Kelly Rowland, stopped by for a two-hour catch up. Last time I interviewed Kelly, we talked about art for an hour, and upon entering the 38th floor, the first thing on her lips: “I just bought my first Keith Harring.” Ughhh, JEALOUS!!! We dished about her new album and it’s first sexy single “Kisses Down Low”, Beyonce, touring, Superbowl, and of course, art and fashion. Next time she’s in NY we’re going on a major exploration of the Met and MoMA. She also promised to send me an advance of her entire new album Talk A Good Game, which comes out June 18. I hope Kelendria Trene “Kelly” Rowland is not just talking a good game! That album better be on my desk in the next two weeks! Kisses…All… Over!

Is it Friday yet? No? Then don’t talk to me.

Obsessed: “Get Lucky”  by Daft Punk with Pharrell & Nile Rodgers; “Crazy Kids” by Ke$ha & will.i.am; “Summer Wine”  by Lana Del Rey & Barrie-James O’Neill; “So Strange” by Superhumanoids; “Master Hunter”  by Laura Marling; “Love Thy Will Be Done”  by Jessie Ware; “Conversation” by Texas; “Together” by The xx; “The Other Side”  by Jason Derulo; “Take A Look At The World”  by Ralph Myerz & Annie; “Giddy Up” by Dragonette and “Q.U.E.E.N.”  by Janelle Monae & Erykah Badu.