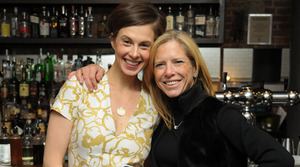 (NEW YORK) Yesterday SELF held a lunch at Whitehall in the West Village to fête Elettra Wiedemann‘s new column “+Fit Girl”, which debuted in the December issue of the glossy and features Wiedemann’s tips and reflections on her quest to get fit rather than skinny. Whitehall is owned by Wiedemann’s husband, James Marshall, who showed up to support his other half and who has his own fitness feature over at GQ.com called “Jogging with James”. The two met via an introduction from fellow friend and designer, Giambattista Valli. His restaurant has become quite the starry foodie haven, with Madonna and Adele reportedly spotted dining separately at the location in the same night.

SELF‘s EIC Lucy Danziger said she came up with the idea for the column, because she felt Wiedemann was the perfect cross section of fitness and fashion. “I have been aware of Elettra for a long time through many different common circles. We know each other through Bellport and we’re both tri-athletes. I’ve watched her career blossom and it occurred to me that there’s this woman in the worlds of fashion, beauty, and chicness who also has a passion for beign healthy, athletic, strong, fit, and active,” said Danziger. “Most other [media] entities talk to her about her fashion persona, but I know what she’s doing at 5 a.m. in the morning: she’s in the pool, she’s working out, and she cares deeply about being healthy. I wanted a columnist to be our ‘it’ girl for fitness. SELF is all about where fashion meets fitness. These worlds are fast intersecting, so I thought, ‘Who better to represent that than Elettra Wiedemann?’ She’s the living breathing persona of where fashion meets fitness.”

Wiedemann’s column will run every other month and alternate with SELF‘s “Sporty Chef” column written by Katie Lee. Wiedemann’s already been featured for her culinary inclinations on a Vogue.com series, Elettra’s Goodness, and she wasn’t daunted when Danziger approached her with the task. “Working out for me and being fit and athletic is really a part of my lifestyle so it was really easy to say yes. I didn’t feel like I was taking on something that felt alien to me,” said Wiedemann. “But now I get to do this challenge where I try to think of different ways to get people involved in being active and that’s fun.” Added Danziger, “She did her first Iron Man triathalon last year. Not a lot of models can do that!” Wiedemann works out six times a week alternating between swimming and kickboxing. “I got to Kettle Bell kickboxing at a martial arts studio in Chinatown. I’m really into training there,” said Wiedemann. “It’s a good bang for the buck for 60 minutes and I can do 10 real boy push ups now so that feels good.” Note to self!

Meanwhile, the real star of the party was Wiedemann and Marshall’s friendly dog, Happy, who was content to meander around the party and socialize with the guests, tapping on legs with his paws for attention. Happy also got passed around the party from arm to arm. We don’t know about a column, but this pet definitely needs an Instagram account. J’adore!
PAIGE REDDINGER

Thom Browne Rolls Out A Collection Of Classics