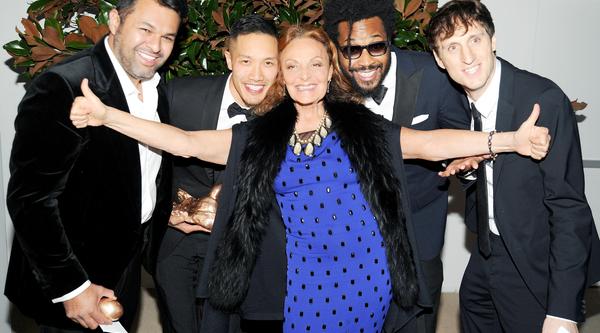 Chow and Osborne met while working at Sean Jean in 2001. When they both decided to leave the company, the duo started up Public School, debuting their first collection in Spring 2008. The menswear designers have kept at it throughout a somewhat tumultuous path to success: Public School was selected in 2010 to join the CFDA’s Incubator Program, during which the designers decided to shut down their business and redefine their focus. When they re-launched in 2012, Public School based its production in New York and honed an astute detail on tailoring. Their rebranding won them the CFDA Swarovski Award for Emerging Menswear design, and catapulting them to further success with their label. In 2012, Chow told The Daily: “Menswear is definitely having a moment, and we’re just happy to be in the mix.”

Public School was awarded $300,000 for their win, while both runner-ups were given prizes of $100,000. Each winner will be provided with a business mentor to help out on the non-creative portion of their companies. Since its inception a decade ago, the CFDA/Vogue Fashion Fund has distributed over $3.8 million in grants to help out 30 different designers and labels. This milestone year is also being immortalized by Ovation TV, which will unveil a six-part series titled The Fashion Fund, on January 22nd. The show, which is more documentary-esque than your average reality show, provides an in-depth look into the entire program, from start to finish.

Justin Timberlake Is GQ's #Hashtag of the Year