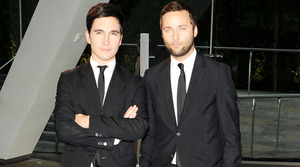 (NEW YORK) Another dose of Proenza power this week: after picking up top womenswear honors, for the third time, at the CFDA Awards on Monday, yesterday brought news that Proenza Schouler’s designers Jack McCollough and Lazaro Hernandez are retooling the (still very chic!) looks from their very first collection, conceived circa 2003, for an exclusive Barneys New York capsule collection. Expect a few design updates, including better patternmaking, since, as the duo told NY Times’  Eric Wilson, the designers “weren’t the best patternmakers” back in the day. The tweaking process included an expansion of the range: Proenza’s premiere collection was comprised of 11 pieces, and the 2.0 version includes 19 items.

The duds, which include now-classic touches like piped bustier detailing, will be available starting tomorrow at Barneys’ NYC and L.A. outposts. While the designs seem to have endured a decade, prices, alas, aren’t inflation-proof: the pieces start at $850, and extend to the $5K range. Besides Barneys being, well, Barneys, it’s a particularly apropos retailer to carry Proenza’s first retrospective reissue: they were the first store to carry the line. Just don’t expect McCollough and Hernandez to  go any more vintage. The designers told The Daily last month that they have just a single skirt from their Parsons senior year thesis, which is what earned them entre to Barneys (aka, the circumstances that fashion school dreams are made of). We’ll be just fine with the redux of the pieces which actually did make it on the racks. Et vous?
ALEXANDRA ILYASHOV

All The Single Ladies…Linda Evangelista Edition