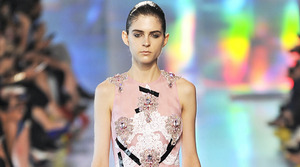 The first order of business for Kane’s new parent company will be to ratchet up expansion with a stand-alone boutique in London next year as well as launching a secondary ready-to-wear line in the future.

François-Henri Pinault, PPR chairman and CEO, commented on the new partnership in an official release: “Christopher is a truly great talent who has shown a real sense of modernity in the way he mixes elegance and subtle constructions. In just a few years, he has built a very distinctive and exciting brand with a unique DNA.”

Christopher Kane debuted with an award-winning collection at Central Saint Martins in March 2006 and quickly became a key player on the London Fashion Week scene. In May 2009, the 30-year-old Scotsman’s fame grew with a line of covetable monkey print tees. One year later, he followed that up with the launch of Resort and menswear. Since the brand’s inception, successful collaborations include Versace, J Brand, Topshop, Swarovski, Shiseido, and Versus, which Kane parted ways with in November 2012 after four years at the helm.

“We are very excited and honoured to be partnering with PPR for the next stage of development for our brand,” said Kane in an official statement. “PPR has an incredible reputation for building some of the very best luxury brands in the world. They respect our creative vision and they have the expertise and experience to help us build the Christopher Kane brand globally.”
MARIA DENARDO

Made To Measure: Sizing Up Fall 2013's Menswear