Made To Measure: Sizing Up Fall 2013's Menswear 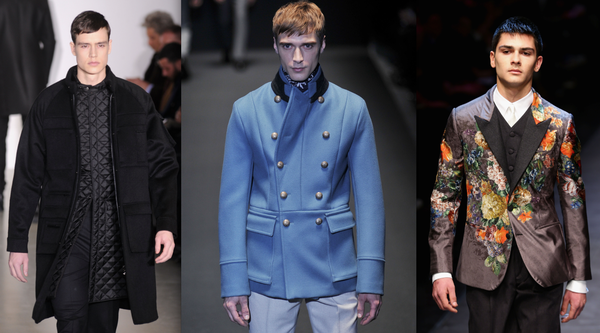 (NEW YORK) Let’s hear it for the boys! As another season of menswear comes to a close this week in Milan, everyone’s sobering up from the whirlwind of shows and no doubt a few late nights at the Principe. Let’s take a look at what’s in store for Fall.

Shades of grey set the overall tone for the runways this season, peppered with blues, maroon and plenty of black. Austerity prevailed, as did new ideas like Sarah Burton’s outstanding collection for Alexander McQueen, which debuted tailored suits with requisite slim cut pants, but this time paired with much longer jackets (read: old school) or that much shorter, modern jacket iteration that’s been increasingly prevalent since Thom Browne first introduced (or reintroduced) the idea. Burton also managed to make pinstripes look cool again by reworking the lines into a sort of patchwork pattern, which played out more literally in other suits by mixing fabrics. Bill Shapiro followed suit at Moschino in pants and jackets; the trend could also be seen in Tomas Maier’s collection for Bottega Veneta, via patchy wool sweaters. Mignon!

Military coats marched down the runways in multiple shows like Burberry, Giorgio Armani, and Canali. Italo Zucchelli’s take on combat at Calvin Klein Collection was displayed in shiny quilted pullovers, vests, and coats that looked fit for a futuristic gendarme. At Gucci, the officer coats lightened up a little in eggshell blues and ivories (although black and grey were on hand for the less adventurous fellas).

And for any stylish lads looking for getups that’ll grab the attention of Tommy Ton and Scott Schuman’s lenses, there were plenty of statement-making pieces. Tiger and leopard prints leapt their way onto Burberry’s trenches and shoes and John Varvatos‘ blazers, while zebra found its way onto McQueen’s footwear. Feroche! No doubt, street style stars will be clamoring to get their hands on Dolce & Gabbana’s floral needlepoint suit jackets and shoes. Who knew les hommes could be so sharply on-point?
PAIGE REDDINGER