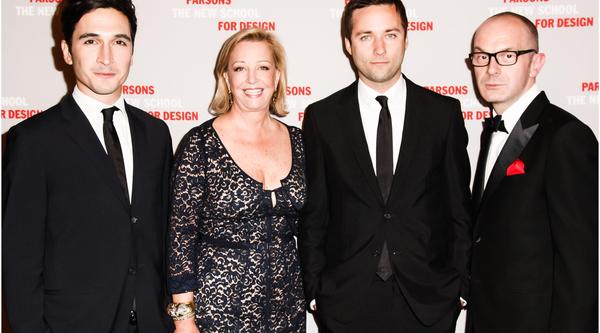 (NEW YORK) Parsons held its annual parade of student masterpieces last eve, as the school’s senior theses were shown off at a fashion show at Chelsea Piers to a packed house of 900 attendees. This year, the school honored Bonnie Brooks, president of Hudson’s Bay Company, plus the critically adored design duo alums Jack McCollough and Lazaro Hernandez of Proenza Schouler. The ex-Parsons boys (how long can we keep calling them boys?) famously sold their entire Parsons senior thesis to Barneys. The usually unflappable Cathy Horyn fumbled a bit while giving the introduction speech for the duo. However, she quickly recovered to tell the crowd what she once candidly told the talented designers. “I didn’t see a signature, I saw a bunch of a clothes in search for a collection,” said the Times style scribe, in true Horyn form. However, she praised them for their talent and what they’ve become in the 11 years since they first debuted their own Parsons collection.

After such an epic and precocious debut, do the designers actually remember that first show and all of the nerves that went with it? “I don’t really remember our senior thesis show. It blends into my memories of the first actual fashion show we had,” Hernandez said. What’s more: they don’t even have a single piece from their debut collection at Parsons. Not even a photograph! “When we were getting ready for this [award], Parsons called us because they were trying to find our senior year collection. We were like, ‘We don’t have it,’ said Hernandez. “They asked us if we had any photos from it and we were just like, ‘Oh yeah, cool, we’ll find it.’ But they found all the pictures in an archive and sent them to us.”

While the clothing has since vanished, one piece was eventually recovered. “The other day we were doing a sample sale and for us, sample sales mean going into our archives and pulling out all of these old things. We always check and make sure we aren’t putting out anything that’s embarrassing,” said Hernandez. Note to the wise: never miss a Proenza Schouler sample sale. “We found this skirt that was in a box in the basement; they were going to put a $20 price tag on it…turns out, it was from our senior year collection, so of course we kept it,” Hernandez recalled. There you have it: the oldest archival piece in the Proenza Schouler oeuvre! Naturally, it’s not for sale (read: priceless).

Other attendees at the event included Olivier Theyskens, Carly Cushnie and Michelle Ochs, Narciso Rodriguez, Sally Singer, Catherine Malandrino, Christian Siriano, Mickey Boardman, Vena Cava’s Lisa Mayock, guest speaker and alum Tracy Reese, and past honoree Reed Krakoff. Another alum turned out for the occasion, Prabal Gurung, has held onto a memories of his own Parsons runway premiere. “My first fashion show that I remember was a contest between FIT and Parsons; I eventually ended up winning, but it was so nervewracking, because you didn’t know what was going to happen and you’re competing with everyone,” said Gurung. The Vena Cava girls were there, Chris Benz…all of these people were there.”

Meanwhile, Boardman is neither a Parsons alum (not a matriculating one, at least) nor an alum of the annual event. “This is my first time and I didn’t even go when I went to Parsons, because I got kicked out after my first semester of my senior year,” said Boardman. “Although, I think I went once as a junior, but it’s all a blur!”

The seniors that took home the top honors this year were Harim Jung and Kay Applewaite for womenswear, Yunxiang Sharon Zhou for menswear, and Diana Woodside for childrenswear. Are these the next big success stories in fashion? Only time will tell, but the event itself was no doubt a success this year as it raked in a whopping $1.7 million in fundraising for the school. Bravo!
PAIGE REDDINGER