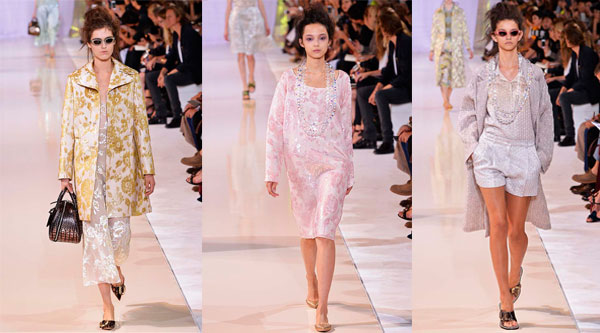 (PARIS) Rochas
Quite like a Fifties housewife who’d accidentally tumbled into a time machine set for the Seventies, the Rochas Spring 2014 collection was awash in feminine silhouettes covered in psychedelic prints, patterns, and fabrics. Shimmering fabrics in pale colors were ruffled, pleated, and tailored into sweet confections that would have erred on the side of cavity-inducing, if they weren’t offset by shoes that evoked chic feather dusters. To tie it all together, coifs were mussed, eye makeup was smoky and perfectly imperfect, and ready-for-anything goggles got paired with the whole look. Igniting the joy of the child within, many pieces were smothered in light reflecting crystals, from a classic polo shirt to an envy inducing ankle-length gown. Another treat from the Rochas runway? Metallic accessories, namely bowler bags, that gave crocodile skins a glam revamp.

Dries Van Noten
Against the backdrop of a golden folded wooden screen that spanned the wall of a giant concrete warehouse space a solitary bass guitar player and a huge amplifier slowly strummed as models walked out in an array of ruffles. To wit: A white shift dress had golden ruffles that went down the side like garland, a black dress done up with tiers of ruffles on the skirt and sleeves, also swirling like a giant flower on the shoulder. There were also Japanese influences, via a tulip-printed black silk kimono trench, and an inventive take on the pervasive fringe trend in a long wrap vest where the multi-colored fringe looked more like a swirl print. And we can’t forget the shoes, which were all the buzz amongst editors: simple but offsetting the intricate looks perfectly, done as flatform sandals and wide-strapped heels. The finale concluded the show with the models lining up against the gold background for a finale cum presentation, as the crowd rushed forward to snap still shots. A prime photo-snapping opp for all? Now, that‘s fashion democracy!