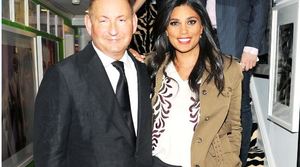 (NEW YORK) As designers get settled back to reality apres-NYFW, last night was about time to celebrate ELLE DECOR’s 2013 fashion issue. Guests like Drew Barrymore, Kelly Rutherford, Nicole Miller, Rachel Roy, Waris Ahluwalia, Elle Decor EIC Michael Boodro, Hearst honcho Michael Clinton, Cynthia Frank and Kelly Bensimon gathered at John Demsey’s well-decorated townhouse for the occasion. The setting, in which nearly every surface was decorated and there were pieces of art covering every wall, was apt for hosting an evening of cocktails and tasty bites. Three separate bars (one in the kitchen, one outdoors and one upstairs) kept guests imbibed as they breathed in the scent of the many Fornasetti candles burning, all while rubbing elbows with both the fashion and interior décor crowd.

Tracy Reese, whose living room was featured in the glossy, admitted that she gets a thrill out of “walking down the street at dusk when the lights come up in people’s apartments” peering into their worlds and gathering inspiration for her own abode. The mag also included the interiors of fashion faves Donna Karan, Francisco Costa, Carolina Herrera, Reed Krakoff, Lisa Perry, Oscar de la Renta’s Erika Bearman, and Joseph Altuzarra, plus Demsey, the host of the evening.

The Daily caught up with Derek Lam moments before he slipped out the door with Jan-Hendrik Schlottmann, with whom he shares an impressive NYC pad. When discussing home envy, the designer mentioned that “Calvin Klein’s house in the Hamptons seems pretty amazing,” but admitted that he has yet to get a peek of the home in real life. Lam is “living through that New York Times article they wrote on his house.” We don’t blame you, Derek!
DENA SILVER