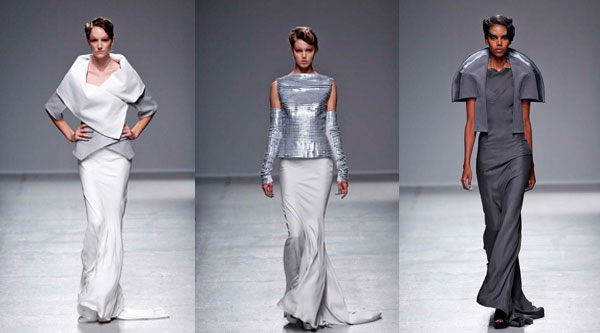 (PARIS) Gareth Pugh
Surprise! There was a dose of color and glam at Gareth Pugh this season. The show opened with a floor-length aqua gown worn avec a giant lavender ostrich feather headdress that would rival Marge Simpson’s hair in height. The touches of fur seem like a natural fit for Pugh, since he got his start working on fur in Michele Lamy‘s studio. She and husband Rick Owens own a 49 percent stake in the designer’s business and were present front row, chatting with the likes of Audrey Tatou, despite Owens’ own hectic schedule prepping for his own show later this week. The feather head pieces emerged later, in black, and also closed the show in via a white iteration, the plumes extended into a long-sleeved shrug and worn with a solid white column gown. A grey wrap top with big folded-over white lapels tied at the waist, worn with a slim long white skirt looked like it would be at home on any uptown type of dame. But this is Gareth Pugh, after all, so the show was not without the designer’s trademark dark otherworldly aura. Models looked alien-like, thanks to huge plastic pieces over their eyebrows that resembled the kind of thing a woman might put in the back of her shoe to keep them from slipping. A silver short sleeved PVC coat with exaggerated half-moon shoulders worn with a plastic looking strapless breastplate top and paired with matching pants. The result? Something fit for a sequel to The Fifth Element. It was a collection that will appeal to retailers without any loss to Pugh’s cool factor credibility.

Felipe Oliveira Baptista
Nomadic was the theme at Felipe Oliveira Baptista. Riffs on military cuts turned out romantic and dreamy in Baptista’s hands. An off-white dress that opened the show had the collar and pockets of a field shirt or jacket, but ultimately was belted at the waist and trailing off with a long, flowing A line skirt slit up the front. Mini trapeze dresses in army green were washed out to point of being nearly seafoam in hue. A white jumpsuit’s top hung around the waist and was held up by suspenders worn over a crop top. Particularly beautiful? A aqua like a floor-length silk shirt dress that had a storm flap in the back. The looks were almost all monochrome (not unlike his collection for Lacoste this season) save for a few takes on camouflage like a green leather dress that was belted at the waist and had rolled up sleeves. Who knew that the severity of the militarism trend could look so idyllic?

Irfé
There were two surprise models at the Irfé show yesterday. One was designer Olga Sorokina, who also happens to own the brand. Was it a display of vanity? Not exactly. “To me it’s important to repeat the story of the house, because Irina did it before and Felix did it before,” said Sorokina. “That’s why I was a little bit nervous because for me it means big things.”  Also strutting down the runway was Harry Brant, the youngest of the two Brant brothers. What was he doing there? “He was chosen because he looks so much like Felix Youssoupoff, whose wife founded the brand in the Twenties,” said Peter Brant who was perched front row to support his brother. “I’ve read Felix’s biography, but I didn’t even know they were doing a show.” Apparently, Harry’s entrée to the runway came about as last minute the night before around 11 p.m. when they ran into Sorokina at Azzedine Alaïa’s exhibition. They met her first at the New Yorkers For Children gala and the two brothers just so happen to be staying chez Azzedine Alaïa during their Parisian jaunt. What a life!  As for the clothes, they weren’t the kind of thing you would expect from a brand founded nearly nine decades ago. It was all about rock n’ roll on this catwalk. There were black mesh crop tops, jumpsuits, suspender-ed pants, and swing coat dresses cut micro mini in length and paired with some ultra cool black Chelsea boots with silver metal square heels. The latter also came in black and white spotted fur. It was the kind of clothing that the wives, bandmates, and girlfriends of guys like front row attendee Jamie Hince would wear (ahem, Miss Moss and Miss Mosshart).