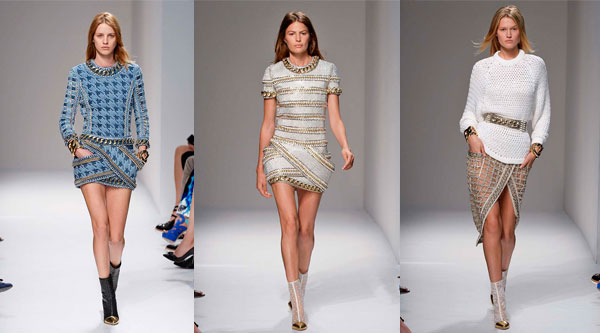 (PARIS) Balmain
Long gone are Balmain’s over-the-top blinged out dresses cut extremely short, catapulting the label back into the public’s interest. Fret not! The glitz and glam have gone nowhere, they’ve just taken a bit more of a daytime approach to things. Suiting pieces got a welcome revamp from touches of quilted leather and denim, especially in the form of fitted jackets and full skirts. Blingage was readily dispersed on thick belts decorated with heavy chains, as well as tufts of feathers lining hems and glitter brocades covering what could have been a basic sweatshirt. It wouldn’t truly be Balmain if there wasn’t a heightened dose of sex appeal, coming to you in forms of sheer pencil skirts with showy slits, cardigans revealing skin via deep V necks, and super sheer shirts. Overalls were a frequent offender, as were chunky knit sweaters and cap-toe ankle boots in leather, lace, and denim.

Balenciaga
Alexander Wang’s second shot for Balenciaga is amply creative, while still sticking to the framework Cristóbal Balenciaga laid down. Cocoon jackets, curved seams and innovative fabrics all showed up, but the sum of the parts was still fresh enough to allow Wang’s personal touch to shine through. Opening the show with a moto-styled coat with curved shoulders, paired with a mini bell-shaped skirt, it was clear the playful games had begun. Gone from Wang’s first showing? The monotonous color palette, instead replaced for Spring ’14 with deep purples, frothy pinks, baby blues, and the most satisfying shade of navy blue. The effort to experiment color-wise kept the collection on the artful side of things. See: peplums that organically wrapped around the hips on tapered pants and shorts alike. The incredible roster of models at the show (Joan Smalls, Jourdan Dunn, Hanne Gaby Odiele, and Daria Werbowy) were upstaged only by the shoe collection, which is bound to be lusted over and immortalized in countless magazine editorials.

Ann Demeulemeester
A refreshing break from the frothy pastels that have taken over the Spring runways, Ann Demeulemeester stuck to her guns, presenting a collection of black on black, plus a touch of red. To be fair, the member of the Antwerp Six also included hints of white, a dark tan hue and a dusty pink silk coat.  Each outfit was topped with a muslin cloth head piece, a modern veil of sorts. Lower down, the trou roster involved sheer white pants flaunted fauna snaking down the legs and velvet burnout slacks, decorated at the waist with a wide leather belt that was a few inches shy of qualifying as a skirt. Dresses made quite the statement, especially the red patterned mini dress with a flowing train that emerged from its short hem. The sheer tights paired with a number of the looks injected a dose of whimsy, decorating limbs with abstract images of items found in nature.

Nina Ricci
The Nina Ricci show opened in billowy, dreamy serenity as a semi-sheer white curtain was rolled out down the runway into a u-shape form. What followed were beautiful white lacy numbers, like a sheer cinched waist halter dress with ruffles down the breast and at the hem in broderie anglaise or a pleated lace baby doll dress worn under an off white technical coat. It wasn’t long thereafter that two topless women ran onto the stage in protest (or for attention?) with their backs painted with a statement along the lines of “models go back to the brothels”. It was a moment, certainly, before it became absolutely irrelevant as an array of very pretty feminine clothing continued to float down the runway. All white devolved into silky green and purple, seguing to include pieces like a beautiful greyish blue gown with subtle fringe that split down the breast. Finally, there were equally as pretty pieces, like a cerulean blue duchess satin coat paired with a floral chiffon top and pleated skirt, or a duchess satin strapless mini dress. But lace was the strongest point here—and that’s just how the show ended, in a long white lace gown that had pleating detail and hints of sheer fabric. It was a pretty showing with just one unforeseen interruption. Luckily, the clothes are what will remain imprinted on the editors’ minds.

The Ann Demeulemeester Collection Is Perfect for...