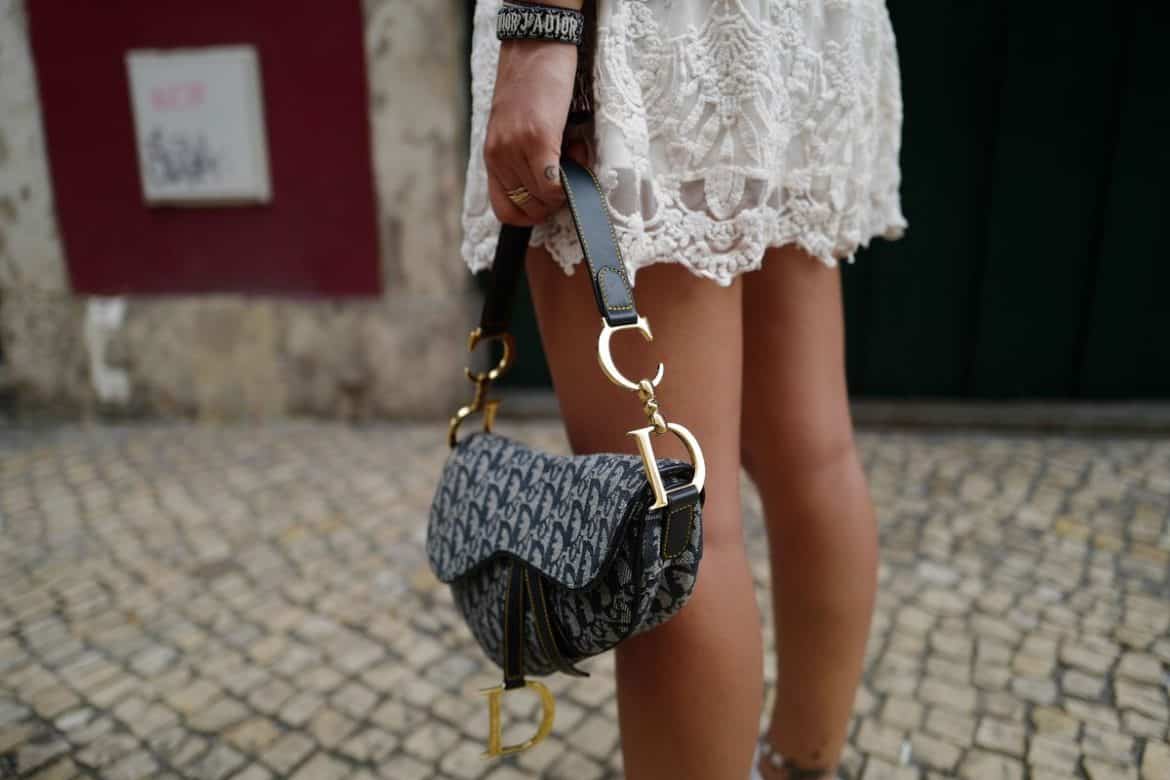 The Daily Front Row‘s perennially chic correspondent Sofia Achaval de Montaigu is soaking up the glamour in Europe. Below, she fills us in on all the highlights and the unforgettable moments that took place in the fashion capital during the Paris Fashion Week Fall Winter ’22 schedule.

Chloe’s show invited celebrities like Demi Moore, Lucy Boynton, and tennis player Maria Sharapova to a venue that looked like a greenhouse. The facilities had glass structures and the ground, covered by dirt, acted as the runway. The collection directed by Gabriela Hearst invited the guests to connect with the earth through knit dresses, thick jerseys combined with black and earthy toned leather pants, monochromatic sets, and the collection’s must-have: extra large ponchos. The layering of items played an important role when creating the outfits. That could be seen, for example, in a midi sleeveless dress with colorful patchwork in the front that was combined with a turtleneck with wide sleeves underneath and sneakers.  The silhouettes were simple and they included straight trousers and tanks, gabardine jackets with wide shoulders and tailoring in vegan leather, midi skirts were also combined with high boots, while big necklaces with natural stones and handmade embroidered handbags gave a boho vibe to the collection. Gabriela Hearst emphasizes sustainable fashion with the growing use of recycled fabrics and through colors that represent climate catastrophes—this was translated into blacks, reds, and oranges for fires and blues for floods, while also incorporating whites and earthy hues.

Balmain presented its collection at Carreau du Temple, where a big LED screen that reflected a pink sky acted as a background and read “It is much harder to judge yourself than to judge others,” from The Little Prince. Celebrities like Neymar, Madelaine Petsch, Serena Williams, Camille Razat, and Adriana Lima arrived at the venue and sat in the front row to enjoy the show to the beat of Rosalía’s music. The show consisted of three stages: the first one included dancers divided into two tribes, who delivered a performance dressed with hats and clothes with the brand’s logo. Afterwards, we saw clothes inspired by vintage sports teams, where items like armor made out of metal with structured shoulders stood out, while being combined with fabrics like leather and lace. One of my favorite looks included a pair of wide white trousers made of leather, a matching white sweater with golden plaques on the chest and arms, and platform shoes. Towards the ending, high couture dresses took over the runway with strikes of neon colors. They combined classic cuts with rigid structures: the finale dress had a voluminous black skirt and on the upper part, we saw a knitted fabric in eye-catching colors that covered the torso.

Saint Laurent’s show took place at the Jardins du Trocadero; the emblematic Parisian spot that the brand has often claimed for their collection presentations. Upon arrival, guests were surprised as the venue’s walls lowered when the show began, allowing passersby to watch the Eiffel Tower the background. The front row included Dominic Fike, Demi Moore, Catherine Deneuve, Victoria Beckham, Úrsula Corberó, and Pedro Almodóvar who sat on square seats that read. “To my father”, in honor of the passing of Anthony Vaccarello’s father. Once the show began, we saw an offering of structured suits and voluminous coats that had a clear inspiration in the ’80s. The coats stood out by themselves, and to add to their magnificence, the brand’s designer decided to combine them with just leggings and long and tight velvet dresses. The deep necklines and see-through fabrics made this collection one of the sexiest yet.  Other items that stood out were the tailored suits that Vaccarello presented in the finale, which were reinventions of the trademark Saint Laurent le smoking, super feminine high heel sandals with dark stockings, chunky bracelets adorning the models’ arms, and the dark aviator sunglasses.

Rick Owens’ presentation took place at the Palais de Tokyo under a smoke cloud that smelled heavenly due to the collaboration with Aesop. Sitting in the first row were DJ Honey Dijon and Teyana Taylor with her daughter Junie, who wore a black balaclava and sunglasses. The models also carried portable smoke machines that billowed smoke as they walked to the beat of Mahler’s Symphony N.5. The new collection was full of gothic dresses, really high platform shoes, and sculptural puffy jackets, as well as quilted capes and nylon vests. Some other highlights include denim trousers, sweaters, and jackets with dramatic spiked shoulders, and drape dresses with hoodies. One of the dresses that stood out the most was white with exaggerated shoulders and a long skirt to the floor with a long train behind it.

Acne presented its collection at Luceé Carnot, where a completely white surface acted as a runway while the guests sat in upholstered spaces that contrasted with the rest of the venue. Up on a platform, pioneering electronic music artist Suzanne Ciani oversaw the tunes. The latest collection designed by Jonny Johanssonn had found clear inspiration in the ’70s, and it shone through in the vintage floral prints and items like gauze dresses and oversized coats. High-rise silhouettes could be seen in maxi skirts that were tightened above the waist with big belts and combined with high-heel boots. In addition, denim clothes with cutouts were the hit of the collection as were patchwork skirts, loose pants, catsuits, and a strapless dress combined with long gloves that quickly became one of my favorites.

Maria Grazia Chiuri presented her collection at the Jardins des Tuileries once more. The show was attended by actresses Anya Taylor-Joy and Isabella Ajani and singer Carla Bruni—but the event didn’t begin until the arrival of Rihanna, who wore a black see-through dress specially designed for her and her expectant belly. The set, designed by Bureau Betak, included a red carpet and some pieces created by artist Mariella Bettineschi, who reproduced the faces of iconic women of the art world. The collection was a revision of the brand’s trademark designs from the New Look era, and it included a collaboration with D-air lab, which created a futuristic vibe. The first look consisted of a black catsuit with neon lights followed by elegant lace dresses with corsets and vests that inflated with a device on their insides. We even saw a jacket that had a heater on its back. Wide tulle skirts were also present, and they were combined with tops with baroque embroideries. On the other hand, classic items like jackets and midi skirts in checkered prints were completed with flat shoes and socks creating an athletic vibe. The accessory that stood out the most were the thermal red and green gloves, which went all the way up to the elbows, accompanying the biker inspiration.

Koche’s show took place at The Westin Paris – Vendône Hotel, where the set designed by Eyesight Group included golden chairs with bordeaux velvet and candelabra hanging from the ceiling, creating a soft environment with tenuous light. Classical music sounded in the background as models showcased a collection that included super feminine dresses that clung to their bodies. The dresses were adorned with black lace, which contrasted with the pale pink and purple silks that added asymmetric cut garments. Patti Wilson was in charge of the styling in the collection, created by Christelle Kocher, and she dared to play with a mix of textures like leather, silk, and fishnet stockings. Big leather belts also stood out by highlighting the models’ waists, and a leather harness over a long pale pink lace dress made for one of my favorite looks.

Virgil Abloh’s last collection and show concept were carried out by his great team, among which is the stylist Ib Kamara. The chosen venue was the Palais Brongniart, where celebrities like Pharrell, Carla Bruni and Rihanna sat in the first row to enjoy the show.  On the runway, a tower of see-through speakers and a gigantic crystal lamp completed the set through which some of the most legendary models walked, including Naomi Campbell, Cindy Crawford, Amber Valletta, and Helena Christensen. Serena Williams’ participation on the runway also attracted attention, alongside the it models Kendall Jenner, Kaia Gerber, and Bella and Gigi Hadid, who posed backstage with the show’s banners that read “Question everything”. The show, titled “Spaceship Earth, an Imaginary Experience”, was divided into two main blocks. The first one included more casual clothes like skiing garments, turtleneck jerseys, sporty bomber jackets, and fur coats. Miniskirts and crop tops were mixed with voluminous jackets and loose leather cargos with several pockets in black, white, and dark purple. Checkered prints stood out in tailoring pieces with straight lines and rigid structures. Towards the end of the first part, the musician Jeff Mills played live with a console on the floor. The models then positioned themselves for what seemed to be the finale, but when they left, Bella Hadid appeared on the runway with an amazing wedding dress and a pair of shoes in her hand signaling that the show was just beginning. In the second part we saw high couture items, long dresses with exaggerated silhouettes and a lot of sparkles in mini dresses and tops. Big tulle skirts with asymmetric cuts were completed by eye-catching caps in sequin , others had fun little ears while others were made of plush, the season’s must have fabric.

Celebrating IWM With Talbots: The Daily’s Sophie Sumner On Her Failsafe Confidence Tips