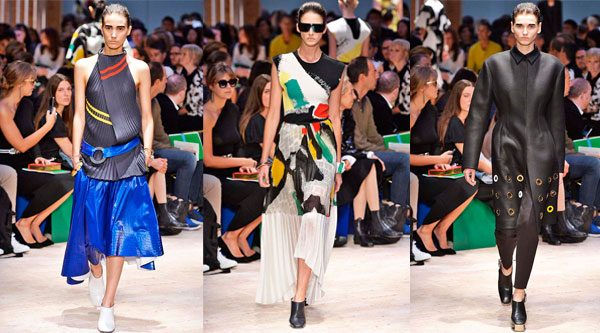 (PARIS) Céline
Phoebe Philo’s done it again. Her work at Celine has elevated her to a cult-like status so lauded that attending the show has become almost as big of a deal as attending Karl’s Chanel show in Paris. And if this collection is any indication, there will be no stopping the Céline obsession. But this season, Philo did an about face from the seriousness of her last collection. The wild and colorful brush strokes that painted the collection were influenced by Hungarian-Franco photographer Brassaï, whose most famous photographs captured the underbelly of Parisian society during the Twenties and Thirties. This manifested in long T shirt dresses and tanks in lipstick red, cobalt blue, and B&W that were worn over long asymm pleated skirts or on multi-colored trench coats with oversized shawl collars. The sort of half-moon, rudimentary graffiti brush strokes were mixed with more modern street references in pieces with blue, red, green, and black strokes on an Eighties-style big sleeved top for a bit of a Rastafarian vibe paired with a black pleated skirt with what looked like a red film strip running through (perhaps another reference to Brassaï, who was also a filmmaker). Aside from pleating (which we’ve seen on just about every runway) it didn’t look like anything else this season. It had that sense of female confidence and independence, which is how Philo is always thinking of her woman. In a cover feature out in this month’s issue of Le Monde’s M mag (Paris’ answer to T) Philo says, “My work has nothing to do with a woman’s physique. I want to go against the idea that a woman is always trying to seduce.” Philo’s woman is fierce and absolutely resolute in her cool factor without having to be over sexualized. The busy mother of three also adds, “When it is time for me to stop working, I will stop. I am not a machine. One has their fragility.” While we can admire that, we sure hope it won’t be anytime soon!

Jean Paul Gaultier
Welcome to Dancing With The Stars, the Jean Paul Gaultier version! There have been a few fashion moments at Paris Fashion Week this season (Rick Owens, anyone?) and Gaultier’s show at the Paradis Latin cabaret theatre was among them. Reminding us that fashion is indeed fun, models strutted their stuff in a way that allowed them to showcase their personalities and play out characters. The choreographed dance numbers that went down the runway were judged by a panel—Spanish actress Rossy de Palma, Gaultier collaborator and model Tanel Bedrossiantz, and choreographer Blanca Li, who didn’t shy away from holding up critical signs like “Adios”. And it wouldn’t be a dance off without Coco Rocha, right? The mod channeled John Travolta‘s Danny Zucko in Grease, by way of a black leather jacket, leggings, and a pompadour ‘do. On her arm? A model recreating Olivia Newton John‘s Sandy, thanks to big blonde hair and a zippered strapless moto-dress. Who else made an appearance? An uncanny Amy Winehouse lookalike complete with her black beehive, signature exaggerated liquid eyeliner, red lips and tattoos in a sexy cut-out floor length black ribbed gown, spiked with a slit running to the hip. Liu Wen took on the hip hop genre in a red track suit and a leopard print baseball cap, while Joan Smalls did the samba and Hannelore Knuts danced the tango. There were plenty of Gaultier classics, like a swirly leather bustier top, a long leather trench coat dress, and a very deep-v sailors top worn with a French beret and pencil skirt. It was the sort of show that editors will be buzzing about the rest of the week. Of course the runway is ultimately about the clothes, but (especially these days) it’s as much about the spectacle.

Chloé
After a few seasons of minimalistic, back to basics designs, Clare Waight Keller’s Spring 2014 collection under the Chloé helm was refreshingly busy, in the best way possible. By experimenting with pleats and placing them horizontally, Keller fashioned trou with texture that beckons to be touched and creating dresses whose bias cut is emphasized by the folds, this was a successful experiment. Silhouettes were not as closely cropped as they once were, with shorts hanging off the hipbone, hitting the knees, plus shirt sleeves with elongated cuffs, leaving extra fabric flapping in the wind. It’s easy to say that this season’s Chloé girl has stepped away from her feminine side, and it’s mostly true. While there were still soft pinks and easy beiges, even the most provocative top, twisted and tied to reveal keyholes of skin, felt slightly less femme. Same with an easy silk dress in a navy print, anchored with a matching blazer. On the handbag front—am area the house is very adept in—were small and slung across the body or folded and closely grasped at hip height. Meanwhile, the shoes sported soles protruding far beyond the wedge heel. The outcome? Anexciting, new shape—and certainly something to add to your shopping list.

Comme des Garçons
For outsiders, Rei Kawakubo‘s collections tend to elicit responses like, “Who would wear that?” For those deeper in the fold, the response is typically one of awe. For the fashion community her collections are works of art that almost always inspire other designers’ collections. This season, she was looking at wearable objects, where each look was accompanied with its own soundtrack provided by experimental musician 20 Hertz in collaboration with the rock band Hell’s Kitchen. These objects were was, of course, abstract: a bubble gum pink “little Miss Muffet dress” came ensconced in a white bony cage, a black skirt that looked like a car tire hung suspended from gold chains over a black leather bra top, a dark grey dress with only one opening for an arm looked like one of those tents that pops open as it comes unzipped, and a black dress that closed the show looked like a giant ottoman encircling the body. It was dark and a bit gothic à la Leigh Bowery (an artist that’s inspired many a designer, including Alexander McQueen). You might not see these looks walking down the street anytime soon, but you’ll likely see many of these ideas fleshed out commercially in other designers’ collections soon. Kawakubo’s Comme des Garçons is regarded with such reverence by the fashion world—and many a young Parsons, FIT, or Pratt student cites Kawakubo as an influence. Her lofty ideas have the ability to gamechange, season after season.

Akrisâ€¨
With a nod to Mother Nature, Albert Kreimier took literal inspiration from the lines of sandstone rock, by translating their hypnotic twists onto silk and chiffon. In hues of red and orange, and a bit of gray for good measure, abstract stripes were reflected throughout the collection in a number of different takes. He applied the same focus to algae and honeycombs, although for those he seemed to want to recreate them entirely. One green jacket was covered in large green squiggles, giving way to a smaller-scaled interpretation of the pattern scribbled on a low cut top, once again shrunk to create a sheer skirt. Kreimier playfully put his spin on a suit jacket, one side of which allowed three curved lines to swoop over towards the straight line of the lapel-less jacket, also reincarnated in a stark white dress version. On the chapeau front, tall straw hats abounded, replete with layered brims perhaps offering refuge from the aforementioned elements that inspired the collection.  â€¨â€¨

John Galliano
Bill Gaytten’s latest collection chez Galliano got presented in two parts—first up, separates and dresses in bright orange, mint green, yellow, and many shades of pink. Coifs got slicked back for the occasion, hidden underneath sleek caps and paired with lips painted bold, neon shades. The cartoon-esque collection was egged on by exaggerated shapes (rounded shoulders, wide skirts, short hemlines) and finished off with super high heels tied off in a bow. Among the collection’s successes? A playful dress with appliquéd daisies, cutouts, and a futuristic perforated skirt suit in sugar spun pink, offset by a hot pink zipper. Gaytten’s talents include, but certainly aren’t limited to, mixing highly detailed fabrics with these over-the-top shapes, plus bold colors and unexpected details. The second half of the collection was black tie apropos, featuring one glam gown after another. Gone was the refreshing color palette and high tech fabrics, replaced by yards of organza, encircled by a futuristic belt and giving the illusion that the models were actually seven feet tall.

Kenzo's Field Trip To The Aquarium

Hedi Slimane Says His Celine Will Be...

Who Should Replace Karl Lagerfeld at Chanel?...

See All the Looks From Céline’s Final...