Kenzo's Field Trip To The Aquarium 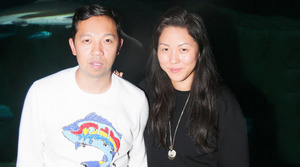 (PARIS) In keeping with their Spring 2014 theme of water and aquatic life, Carol Lim and Humberto Leon celebrated their work with a bash at the Aquarium du Paris. Guests descended a staircase as images of sea life floated across a big screen that hung from the wall. But the best views were in the rooms where sharks swam above guests’ heads in giant aquariums. Instagram heaven much?â€¨

Meanwhile, guests got down on the dance floor to music by Felix B, Basement Jaxx and DJ Betty of Girls Girls Girls. Chicsters like Leigh Lezark,  Natalie Joos, Tabitha Simmons, Craig McDean, Harley Viera Newton, and Theophilus London were spotted mingling in the crowd.â€¨ We caught up with Humberto Leon behind the velvet ropes, where guests like Leon’s mother were taking in the scene. Mignon! When asked about Carol’s whereabouts, Leon said, “I don’t know. Somewhere around here. Probably taking a shot!” Rightly deserved. Leon said he planned to celebrate right up to the 3 a.m. cut-off time. Apparently, the rest of the guests were on board with that idea, as there was still a mad rush to the door as your Daily made an exit past midnight.â€¨
PAIGE REDDINGER

Peruse our GALLERY to see what went down in Paris.