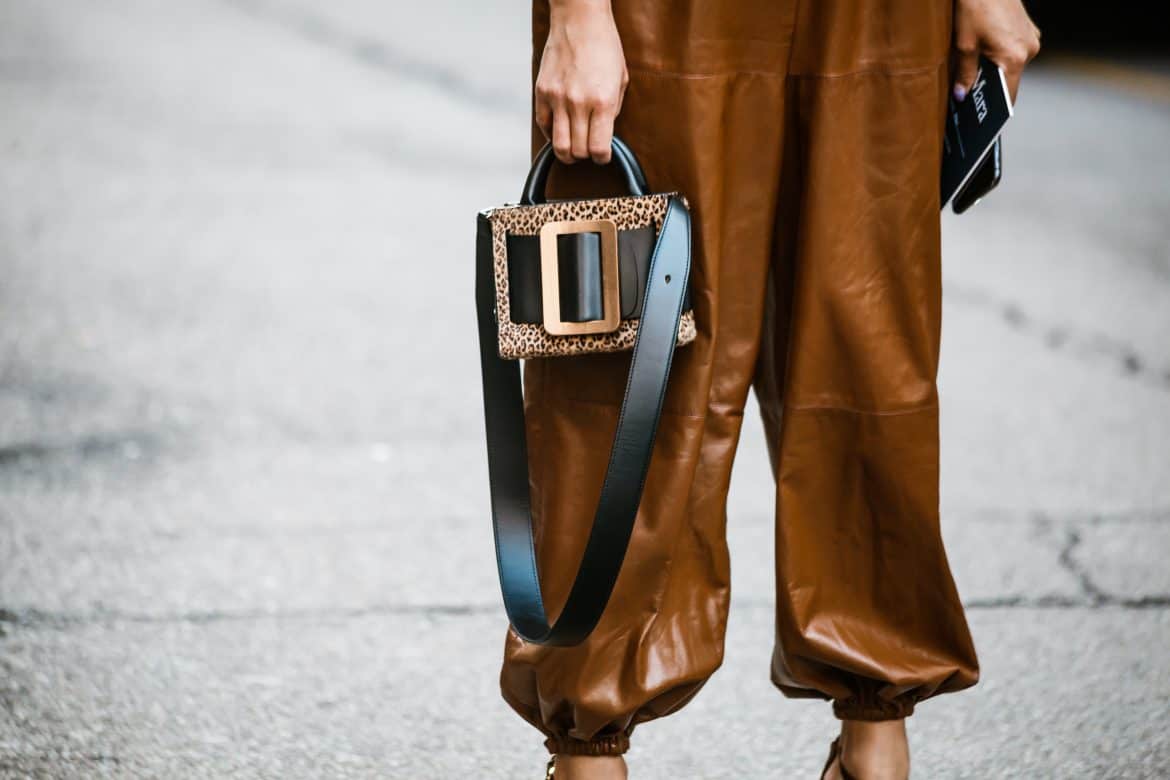 The day began with Loewe. Creative director Jonathan Anderson won us over, once again, with his innovative presentation titled “Show-on-the-Wall”. It was a collection with a theatrical spirit full of big sleeves, balloon skirts, and crinolines,
made in collaboration with British artist Anthea Hamilton, who created the prints, and inspired by Noh and Kabuki (two Japanese theatre movements.) The format chosen to present the new season items was very creative: guests received a
kit that contained not only big images of the line, but also tools like a scissors, brushes, and glue for each of us to create our own proposal for the clothes. Besides, we were also given the music sheets for Thomas Tallis’ Spem in Alium to add a musical element.

Anderson’s amazing designs were also displayed in a salon of the Hôtel du Grand Veneur on 34 mannequins. Among my favorites, two particular designs stood out: a delicate white dress with ruffles from the shoulders to the skirt and a floor-length one in black with white balloon sleeves. The posters were printed with models of different ages, genders, and body types, all wearing Anderson’s designs which stood out because of their big volumes. Among them was a lurex number with ruffles, a flared skirt and a fitted waist. The color palette included green, blue, pink, and camel hues besides the classic black and white. Furthermore, the designer released a video in which he can be seen talking with model Kaia Gerber about the line, which gave a nice finishing touch to a very dynamic presentation. 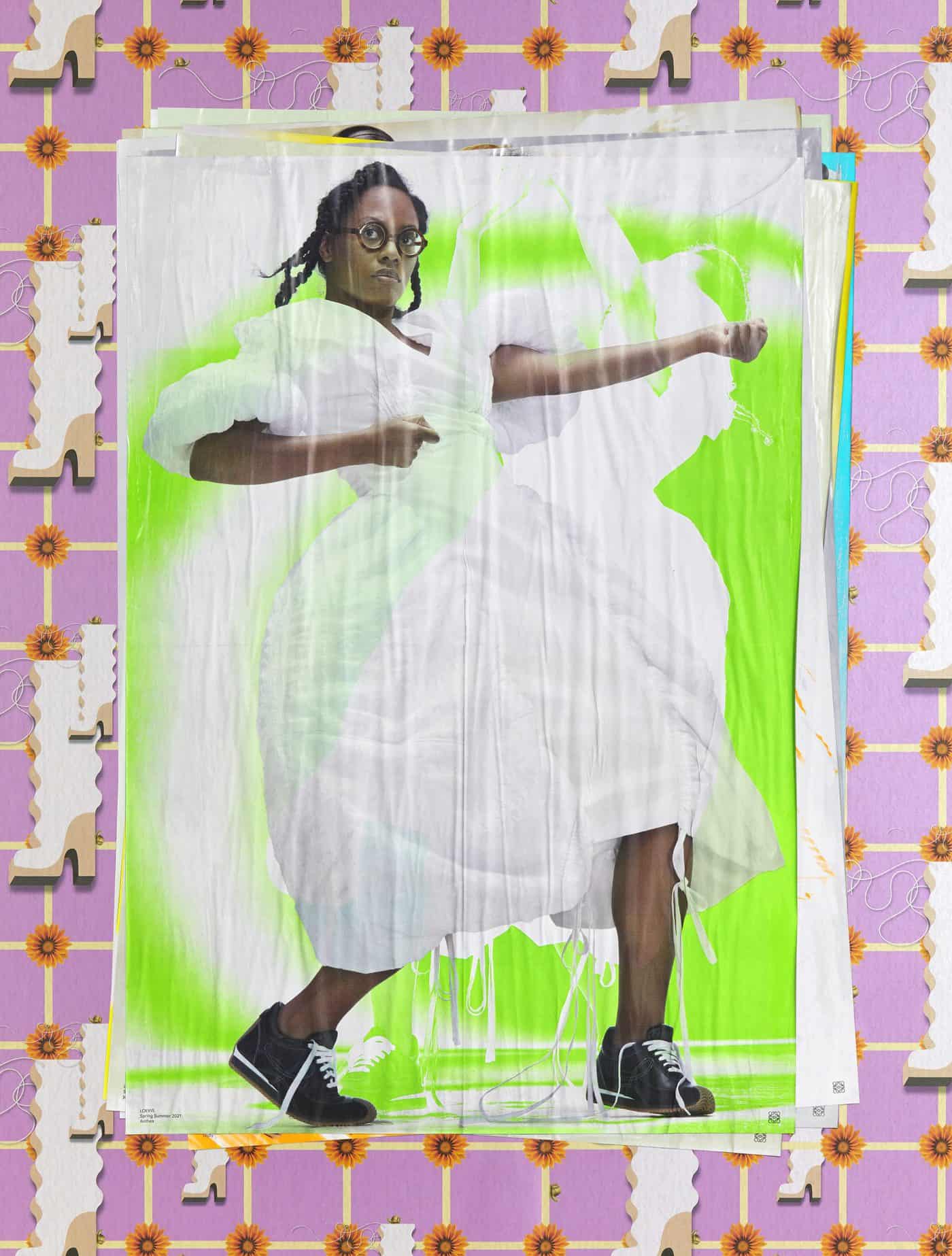 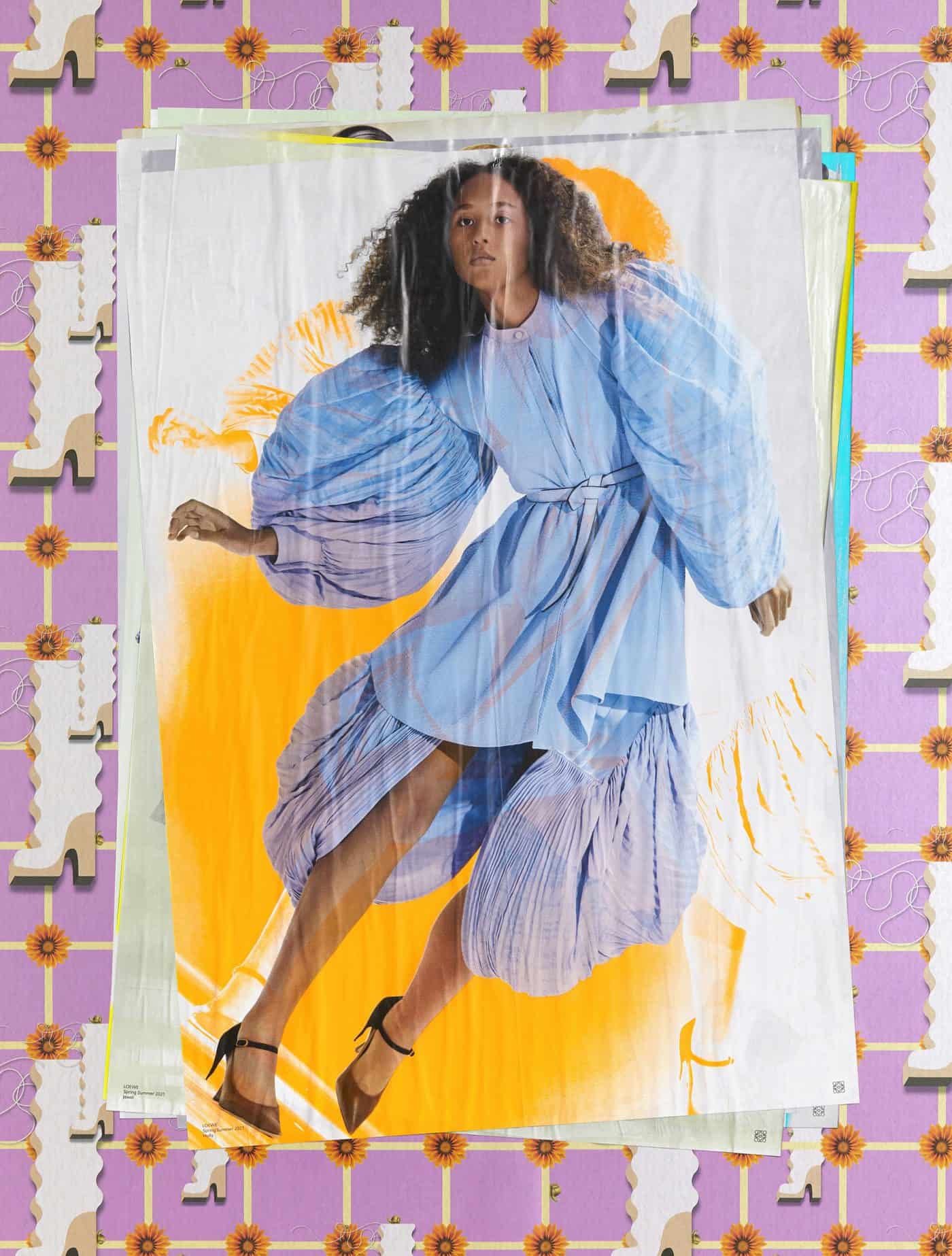 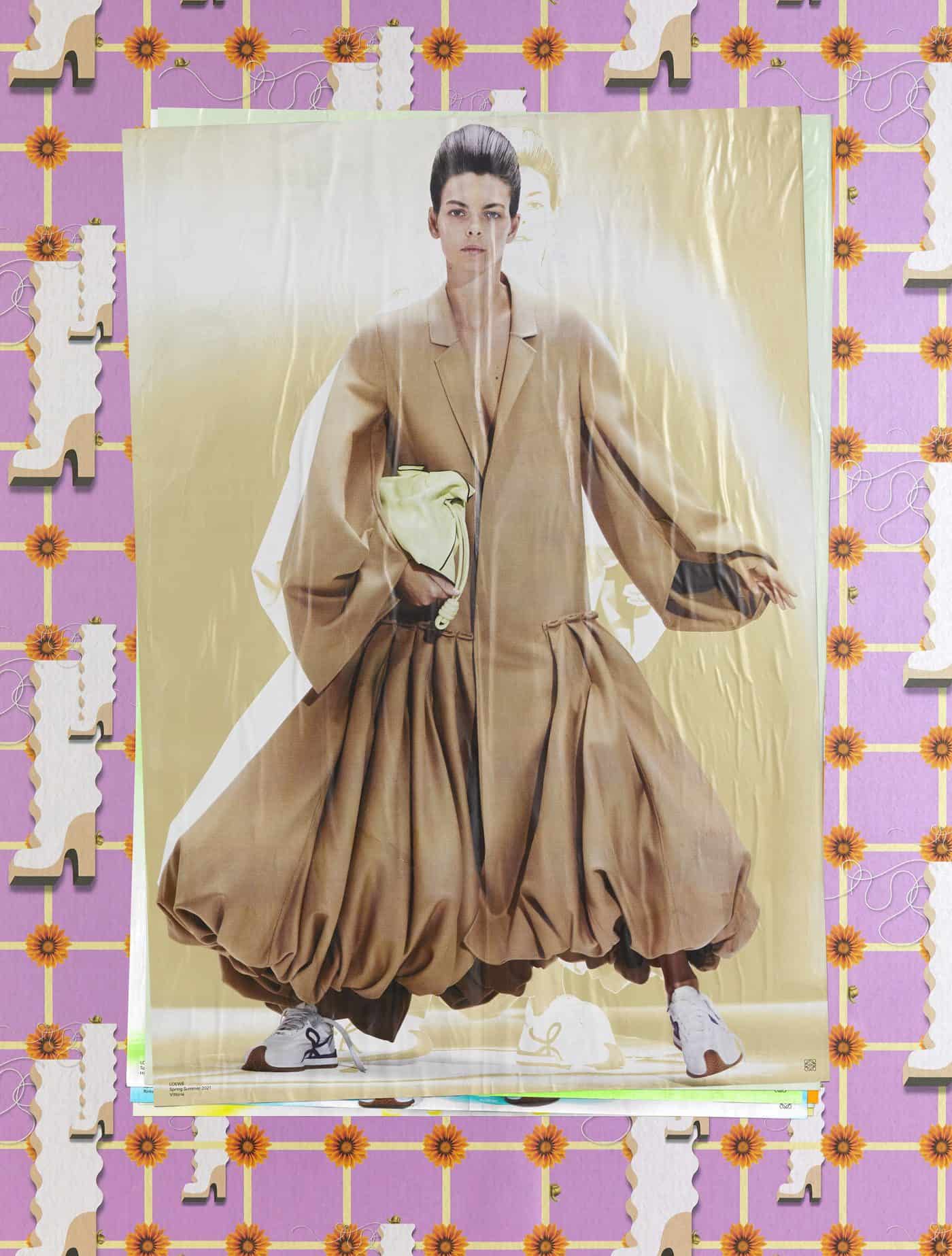 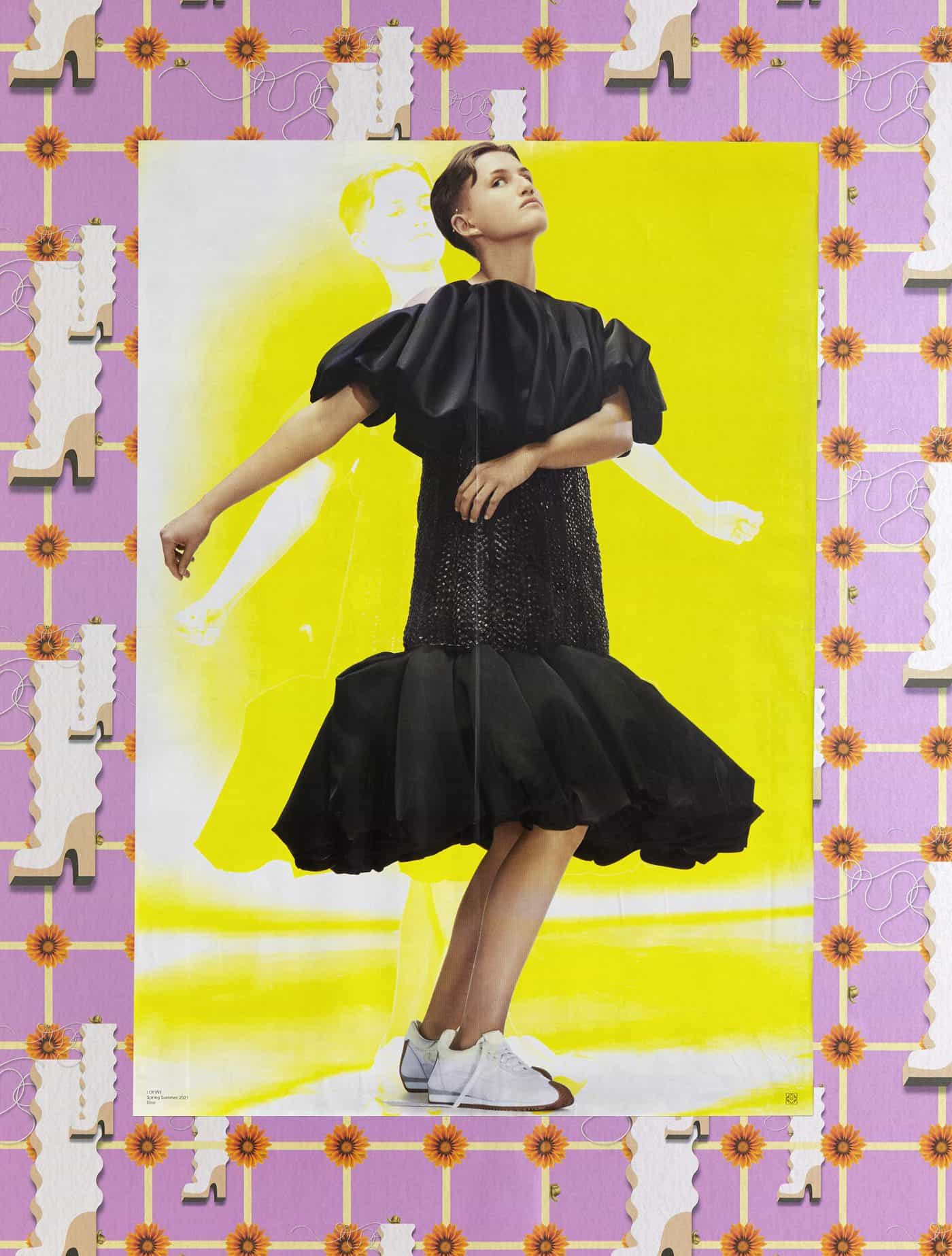 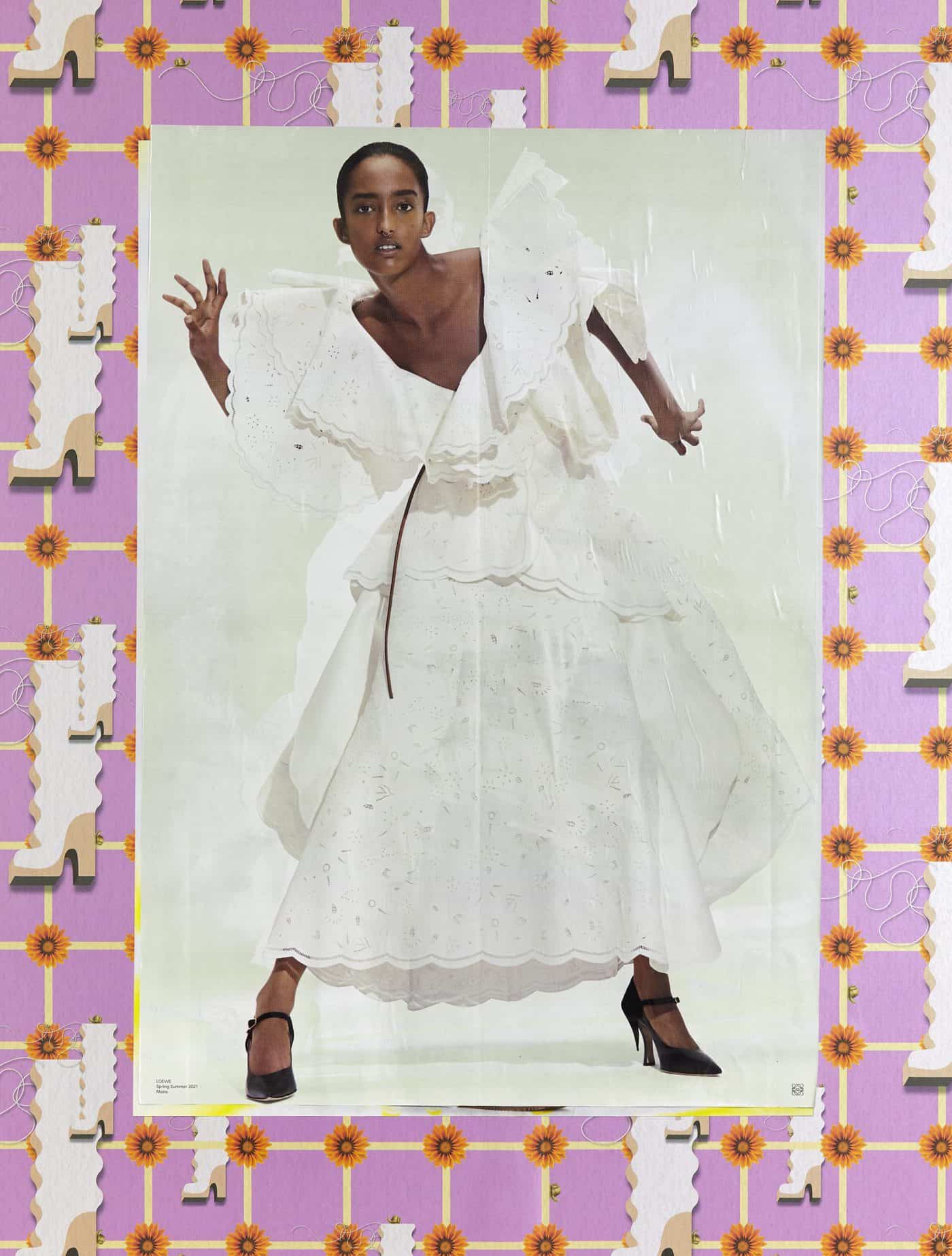 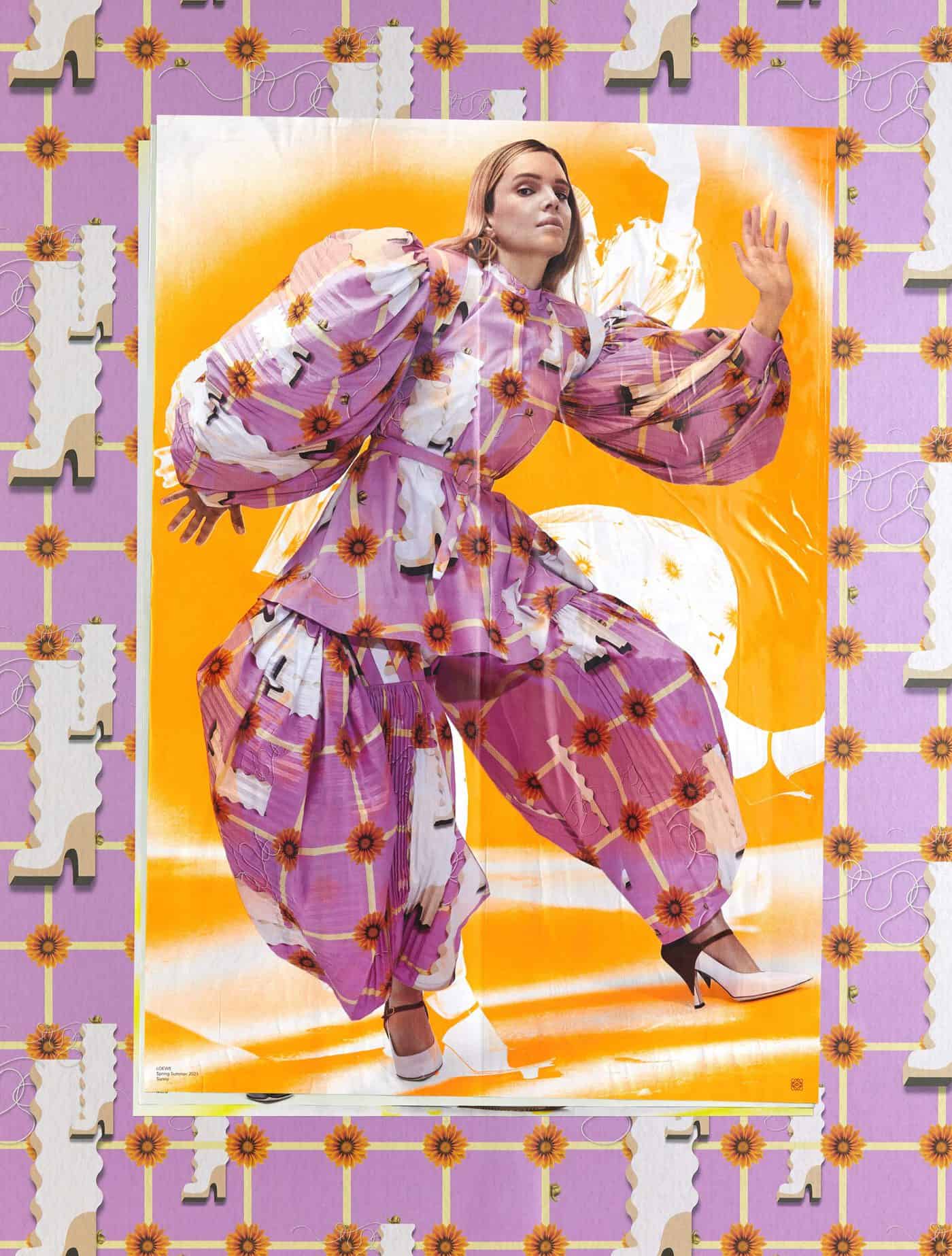 Nina Ricci was the second presentation of the day where millennial designers Lisi Herrebrugh and Rushemy Botter chose to display their line full of vibrant colors in a digital format. The video consisted of a recording of a cellphone’s screen that lead us through different creative moments of the collection, from searches in Google, YouTube, and chats.

Their designs were focused on comfort: clothes that float over the body and striking a balance between tailored and stay at home ease. The main inspiration was Nina Ricci’s best-selling fragrance, L’Air du Temps. As a result, we could see silk draped dresses and blouses with loose ribbons by the wrists, while onesies and maxi skirts also stood out. The colors of said fragrance were also predominant in the collection, since white and yellow were the common thread that united the different looks. The campaign was starred by model Akon Changkou in both the lookbook and the film
presented in Paris Fashion Week.

To close off the day,  Olivier Theyskens presented a digital presentation of his collection “L’Horloge”. To design the items, he sought inspiration from French singer Mylène Farmer and her silhouette. When it came to the models, they all channeled Farmer’s likeness too. Masculine suits in shades of gray and silk blouses with tall collars stood out, as well as long black dresses and sheer, draped tops. The dramatic styled outfits were completed by gloves in black and red and towards the end, big veils covered the face of the model.

Joseph Altuzarra presented his new collection digitally. The collection was inspired by the first book he read during quarantine—the novel Dune—which was mailed to different personalities alongside a handwritten note from the designer, fabric samples, and sketches about the proposal for Spring Summer 2021. The designer also shared a video in different digital platforms about the creative process behind the clothes, which included a white poplin shirt dress. Altuzarra also explained how his team created the pleats, which he defined as a “haute couture development”. This gave fluidity to the items, while orange and yellow hues created a warm vibe. Others designs, like dresses and skirts had pearl embroidery, giving the collection a super feminine edge.

Join Creative Director @josephaltuzarra for the making and unveiling of the SS21 collection. #AltuzarraSS21

On this occasion, Vivienne Westwood opted for a virtual presentation of the collection, directed by Andreas Kronthaler. Kronthaler, who was also in charge of the photography, modeled alongside Westwood, Sara Stockbridge (the brand’s legendary muse), and the model Vita Leandra in a fun lookbook and video where they wore the collection’s new clothes and recited different poems. Westwood’s eclectic proposal included her trademark plaid fabrics on more relaxed items, while
other pieces drew attention because of the complexity of their structures, foldings, and exaggerated volumes.

The Tennis Club de Paris was the chosen venue for Hermès’ new collection. Digital columns were installed in the runway, where the work of different artists was displayed while the models walked down the irregular floor. The designs stood out for their sensuality and the excellent leather. Designer Nadège Vanhee-Cybulski presented a more risqué collection than we are used to; with short tops revealing flashes of skin and while leaving bare backs. Lastly, the dresses made out of leather straps were the most desired pieces. The color palette was full of neutral tones with hints of color from the orange hues.
Low shoes in the style of Swedish clogs were also a hit.

Every season, one of the most expected presentations is that of Balenciaga, because of its trademark avant-garde nature. On this occasion, the brand opted for a film directed by Walter Stern, where we could see the models walking the streets of Paris to the beat of “Sunglasses at Night” by Corey Hart. Designer Demna Gvasalia is aspiring towards a more sustainable brand, so recycled fabrics were used in 93.5% of the collection, which included unisex designs in one size only, which will
help to reduce the environmental impact in making one production design per gender. Sweatpants and sweatshirts were, alongside other sporty items, the protagonists of the line. After all, Gvasalia’s impressive ability to transform luxury items into the comfortable must-haves of the season have made him a global fashion force. Sunglasses were the star accessory, while slippers with heels contributed some grace to the looks.

Afterwards came Gabriela Hearst’s show, who debuted in Paris Fashion Week and joined the sustainable wave: she admitted she did not buy a single fabric for this season and that everything was made in recycled deadstock.The chosen venue to do the show, produced by Alex de Betak, was the majestic École des Beaux-Arts, were we were received by a big lunch with cocktails and fruit juice. While the models walked around, the Spanish singer Leiva sang and played his guitar live,
creating a super intimate atmosphere. Masculine, two-piece suits tied at the waist with belts stood out the most, while laser cut dresses contributed femininity and sensuality. Handmade items included remnants of lace and embroidered beadings. But all in all, my favorite items were the crochet dresses.

Finally, Paco Rabanne’s Julien Dossena presented his collection with a show that took place at the Espace
Commines. The hall was decorated with metallic curtains over the walls, allowing the models wearing pieces created from similar metals to camouflage themselves with the decoration. This easily made Paco Rabanne one of the shiniest shows so far! Inspired by Joan of Arc, Dossena tried to create an army of warrior women that walked with strength while wearing his designs. Besides tight dresses and metallic sequins, we saw denim jeans combined with animal prints and lacy tops, which created a balance between the most extravagant proposals and others more fitted for street style.

Inside the Espace Commines, @JulienDossena reimagines the garde-robe with an avant-garde #PacoRabanne attitude. Watch the replay now on Instagram stories. #PACOSS21

Beauty Made In Italy Spotlight: Herbatint