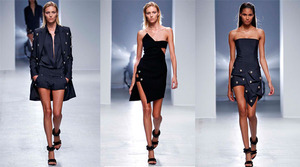 (PARIS) Anthony Vaccarello
Imagine an updated Robert Palmer video come to life! Anthony Vaccarello knows how to dress a woman in the most seductive of ways. It was about legs, legs, and more legs! And as skimpy as the clothing was, it managed to still look cool and not over-the-top. It was pure unadulterated sex appeal, but done the Parisian way (i.e. not gaudy). Skirts and dresses, mostly in black, dovetailing to a V just above the derriere and attached at the sides by two bands to reveal just about everything…without being lewd. There were also acid-washed jeans and mini skirts, a red leather moto-style dress not unlike the Vaccarello dress Anja Rubik wore to the Met Gala, and black lacy dresses that only partially covered one leg and overlaid a sort of half shorts half underwear bottom and a bandeau top. It’s the kind of thing donned by cool chicsters like Alice Dellal and Lou Doillon, who were being bombarded in the front row. And why not: the garb suits all those late nights out on the town. How does the collection’s salacious allure add up? Simply irresistible.

Adele Moonlights As A Comic