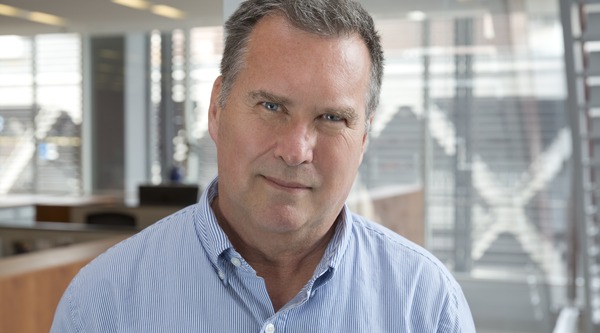 (NEW YORK) Another NYFW encore-worthy piece as you bide your time between PFW shows…Ever encountered Stuart Emmrich? Sure you have: He’s the guy behind your required brunch reading material. Emmrich took over as the New York Times Styles editor in 2009, 11 years after joining the paper, hopping over from the Travel section. So, how’s he adjusting to the fashion grind? One crisp blue shirt at a time. BY ALEXANDRA ILYASHOV

Give us the Stuart backstory!
I came to the Times in 2002 to launch the Escapes section. Then I took over the Travel section for five years. Then I talked to Jill Abramson about what to do next. People move around a lot at the Times.

Did you travel much while you edited the Travel section?
No! I just paid people to go on great vacations and write on it.

Did anyone give you words of wisdom for the new gig?
When I first got the job, Anna Wintour sent me an e-mail saying, “I’m intrigued…we should have lunch.”

How else did you acclimate to the fashion grind?
I went to the couture shows in Paris with Cathy Horyn. Between shows, we’d get stuck in horrible Paris traffic, and I’d ask her about designers’ backgrounds and who used to design for certain fashion houses. Cathy brought me up to speed very quickly!

What’s the point of the Styles section nowadays?
The idea is to make fashion accessible to the non-fashion reader. It’s for people who’ve heard the names Versace or Dior or Calvin Klein and don’t know what goes on behind the scenes, but are curious.

Which part of the Styles section did you leave completely untouched?
Modern Love. It’s usually the “most searched” term on the Times website on Sundays. Dan Jones, the Modern Love editor, is the author of The Bastard on the Couch, a companion book to one by his wife, Cathi Hanauer, The Bitch in the Kitchen. Dan responds to every submission; he takes it very seriously! I’ve urged him to seek out more entries that explore the humor and frustration of relationships, and perhaps cut back a bit on those that feature death and dying.

How did you deal with the Cathy Horyn–Oscar de la Renta drama?
You want the critic to write the story, not be the story! Cathy is a fair and honest critic. People may object to her, but Cathy wouldn’t ever have a vendetta toward a designer, or have her personal feelings color her work. I think Oscar overreacted. The two of them have kissed and made up. In the end, she handled it with a lot of class. He did as well.

What’s your favorite story that’s run since you’ve been in this gig?
This has the potential to piss off my other writers, but the most entertaining piece we’ve done since I’ve been here is Eric Wilson’s profile of Courtney Love.

Are there any pieces you regret running?
There are dozens I wish I’d done a better final edit on!

Is anything off-limits in the section?
There may be people who just feel too sleazy to appear in a Styles section profile.

Got any unlikely sources of inspiration?
At least once a week, I go to a restaurant by myself with a book and have a glass of wine. What happens instead of reading my book is that I end up hearing other people’s conversations and thinking “Oh! That’s a story.”

Do you have a favorite show?
The DvF show is the one to go to. If you were going to film one for a movie, that’s the one you’d film. It’s about her energy and the crowd. It feels like old-time New York glamour. When Diane comes out to take her bow, you can tell that she’s proud! She clearly enjoys the moment.

Has your own style changed since you started helming the Styles section?
No. If you went into my closet, you’d see a stack of white shirts, blue shirts, and some khakis.

Sounds…straightforward!
I like classic Americana: J.Crew, Banana Republic. I went to the Lanvin show in Paris, saw these amazing [colorful] suits, and thought, “If I lost 15 pounds…” If I weren’t me, that’s who I’d wear.

The New G-URL: Into The Gloss' Emily Weiss