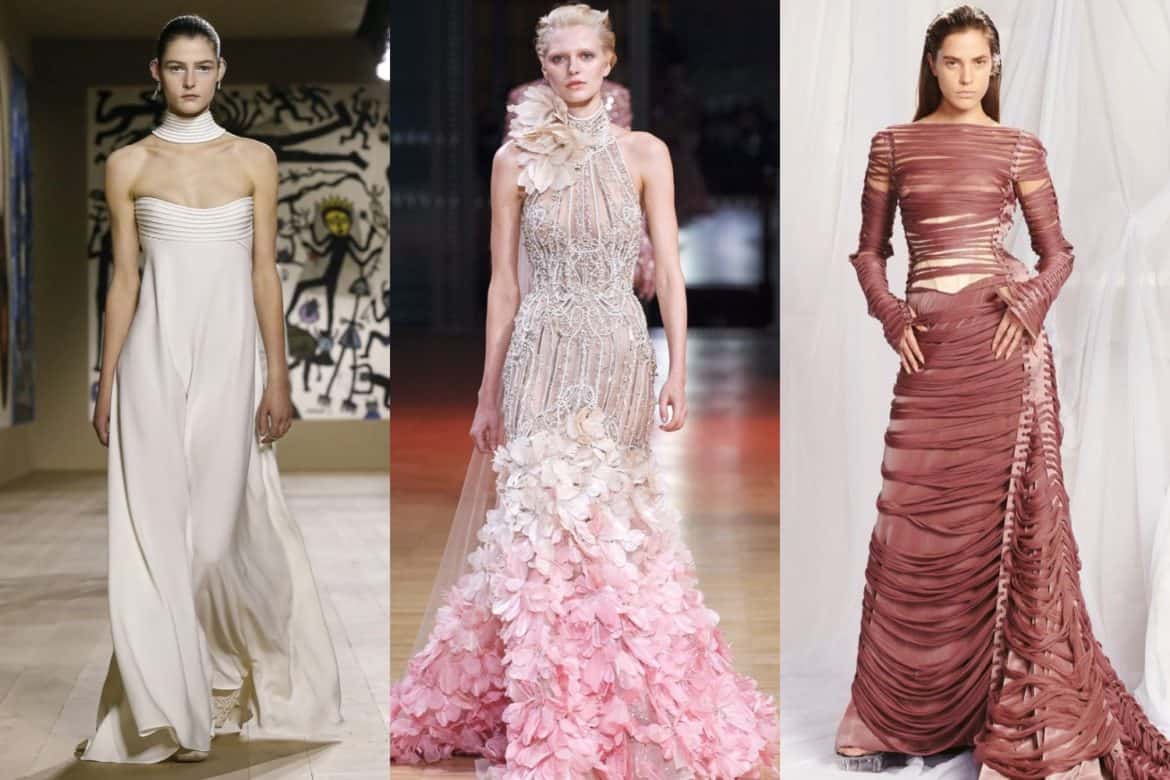 The Daily Front Row‘s perennially chic correspondent Sofia Achaval de Montaigu is soaking up the glamour in Europe. Below, she fills us in on all the highlights and the unforgettable moments that took place during Paris Couture Fashion Week

Dior’s fashion show took place at the Musée Rodin, which accommodated celebrities like Beatrice Borromeo, Rosamund Pike, Camille Rowe, Madelaine Petsch, Lady Amelia Windsor, Isabella Adjani, and Cara Delevingne, who caught every photographers’ eye. The venue was decorated with colorful murals created by India’s Chanakya School of Craft, specifically by artists Madhvi and Manu Parekh. The works of art emphasized Maria Grazia Churi’s message for the show: the importance of handicraft work and the significance of the seamstresses’ work, who created the impeccable embroidery that we saw on each of the designs. Models walked down the runway to the beat of Beach House’s Once Twice Melody, and wore subtle white eyeliner under their eyes. The clothes created languid and feminine silhouettes. Without a doubt, the embroidery and the stones stood out in a collection where the use of color was minimal.

Valentino presented its collection titled “Anatomy of Couture” at Place Vendôme. Descending down the majestic stairs, we saw Kristen McMenamy wearing a black mini dress opening a show that focused on portraying elegance and distinction from beginning to end. There was a diverse group of models that followed McMenamy, among which were Maria Carla Boscono, Lara Stone, Anna Ewers, Jon Kortajarena, and Violeta Sánchez, who walked to the beat of Antony and the Johnsons in a soundtrack created by ANOHNI. Pierpaolo Piccoli’s latest collection featured long gauze dresses, mini dresses, and loose trousers for both men and women. The use of color leaned towards the monochromatic, and one of my favorite looks was a matching baby blue set that included trousers and a shirt completed by a big voluminous cape that seemed to float. The palette also included Klein blue, pink, neon yellows and oranges, fuchsias, purples, and lime. To seal the deal, short and long gloves offered smooth sophistication.

Alexandre Vauthier presented his new Spring Summer couture collection—and authentic and bold would be the words to describe the clothes we saw on the runway at Boulevard Lefebvre. Said venue, which looked as if it were under construction, contrasted with the sparkles and the glamour of the dresses. The highly attended event brought together guests like Valentina Ferragni, Tina Kunakey, Amina Mauddi, and fashion avatar Noonoouri. The collection had an 80s vibe. There were suits with big shoulder pads and striking but monochromatic looks that included sequins, tight silhouettes, feathers, and waterfall shaped ruffles which could be seen in colors like red, green and silver, but also in animal print. One of my favorite looks was a black velvet catsuit with a turtleneck and a great cape with feathers that sashayed down the runway. The hair and makeup was natural, contrasting the high-octane styling.

Elie Saab’s show was one of the most anticipated of the schedule, since it was the brand’s first presentation in two years. Le Carreau du Temple was the chosen venue for the event, with celebrities like Clotilde Courau, Elodie Fontan, Madelaine Petsch, and Michelle Yeoh sitting front row. The collection was inspired by the Mediterranean Summer colors and the designer sought to ignite joy in the audience. The silhouettes were super feminine and exuberant, as reflected in items like skirts and big capes made entirely out of organza flowers which made a big visual impact. The color palette oscillated between softer ones like nudes, turquoise, and grays and more striking ones like fuchsia, lime, and magenta. Dresses with embroidered stones created languid but not undistinguished silhouettes: hundreds of beaded strips decorated some of the most delicate dresses. In addition, some models wore headdresses that covered part of their faces and that looked like crowns from time to time. The finale featured a majestic wedding dress with a wide skirt ending in a train, an embroidered veil, and a cape that completed one of the most applauded designs of the collection.

Chanel opened Paris Fashion Week’s second day with a show at the Grand Palais. The set was designed by artist Xavier Veilhan, who envisioned different levels inspired by an equestrian garden. Musicians were scattered around the hall playing a series of songs composed by Sebastien Tellier for this event. Sofia Coppola, Vanessa Paradis, and Pharrell Williams were some of the celebrities that sat in the first row to accompany the launch of the new collection. As always, Chanel’s show is one of the most anticipated ones due to their amazing production, and this was no exception. The show began with Charlotte Casiraghi riding a brown horse down the runway, ensuring a talked-about entrance. The collection designed by Virginie Viard was inspired by the 1920s, and featured silhouettes and delicate embroidery combined with beautiful flowers. Meanwhile, gauze and organza dresses stood out because of their asymmetry, since they were short on the front and longer on the back; and trousers came with slits all the way up to the thighs. Evening dresses in translucent fabrics were both suggestive but elegant, and lastly, the finale included a series of white outfits, including the trademark finale bride who was as sophisticated as ever.

The last day in Paris Fashion Week had a star and it was Fendi. Fragments of architectural pieces accompanied by a gigantic sphere lit up with white lights were suspended over a dark runway inside the neoclassical Palace Brongniart. Kim Jones, the creative director, referred to the set as the kingdom of “the celestial Rome.” The collection, sensual and futuristic but with a nod to the past, included a variety of designs like dresses with sculpture prints and the Virgin Mary on velvet. The color palette included midnight blue, dark purple, red, and silver. Some of the dresses worn as tunics fell loose over the models’ bodies, while others were matched with corsets to create tighter silhouettes. Embroidered socks with floral motifs stood out, but the items that caught everyone’s eye were high heels, only with no visible heels! The makeup included little sparkles on the face that created a delicate luminosity, also reflected on the earrings designed by Delfina Delettrez that completed the looks. Sitting in the first row were celebrities like Camille Razat, Garance Marillier, Madelaine Petsch, Miriam Leone, and Noomi Rapace, who were clearly excited to witness the show.

Jean Paul Gaultier’s headquarters in Paris was the chosen stage for the brand’s couture collection by Glenn Martens. The brand had one other collaborator guest since the man who named the brand after himself retired: Japanese designer and Sacai founder Chitose Abe. Through 36 different designs, Martens explored the more theatrical and dramatic side of the French couturier. The brand’s trademark corset was present during the show but taken to new levels, including three-dimensional black and white dresses tight to the body but voluminous at the waist. A pair of low rise jeans stood out combined with a nude corset with long ribbons that covered the arms and the torso. Maxi skirts took over the runway in green and dusty pink, while shoes with platforms gave the ultimate theatrical touch.

Schiaparelli put on an incredible show at the Petit Palais’ main gallery. There, celebrities like Chiara Ferragni, Alexandra Pereira, Simon Porte Jacquemus and Olivier Rousteing, Kanye West, who wore an eccentric look that covered his face, and his girlfriend, Julia Fox, sat in the first row. There was a white light that went through the venue’s windows, generating a perfect climate for a collection inspired by the celestial. The line designed by Daniel Roseberry had white and black items combined with majestic gold pieces as their foundation. These gold pieces were seen in entire looks as well as in little details like hairdos, earrings, and shoes. Each of the looks was a work of art in itself, and had an obvious inspiration in the surrealism of the 1920s and 1930s. There were corsets with huge cones, a short black dress that had metallic golden strips coming out of the chest all the way to the floor, and outfits came complete with enormous hats or tulle veils. The designer’s focus was on creating pieces that moved the audience, and he achieved that without a doubt.

Daily News: An ALT Tribute Ceremony Scheduled For May, Emma Roberts Opens Up About Motherhood, Farfetch Snaps Up Violet Grey, And More!