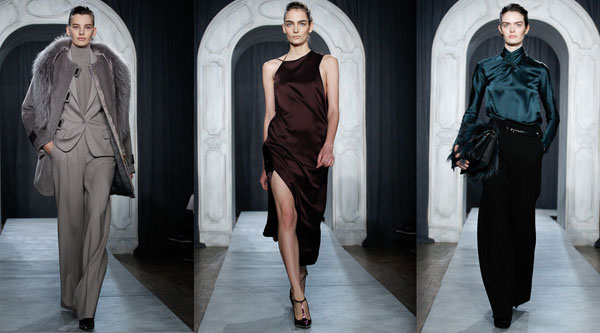 (NEW YORK) Jason Wu
Few things say power quite like kicking off a show with Adriana Lima in a strong black suit and a sheer sparkly top. That’s the high-impact route Jason Wu went, and the collection that followed continued on the same route, packing one punch after another. There was a coat shot through with belts, zippers and fur in all directions, and the sum of the parts somehow worked swimmingly. Meanwhile, a no-fuss silver dress with a midriff cutout resembled liquid metal. A sense of fluidity kept on surfacing on the array of gowns, from a dark teal one with a gathered front to a purple velvet slouchy number. Wu’s powerful girl is clearly nothing to mess with, as he pointed out by ending things with a steely-faced Karlie Kloss, who draped a fuzzy coat over a slithery gown, like she was exiting a soiree after a late night out.

Suno
Gypsy chic? Yes, that’s a thing, and it was brought to life by Suno, as they turned to Jeremy Sutton-Hibbert’s documentation of the change in wealth of the Roma gypsies from Bucharest, not Budapest. While they still kept their traditions intact, this tribe added quite a few flashy touches. To show, there were stripes of gold encircling socks, adorning sweaters, and simple fabrics ornamented with bursts of metallic. Towards the end, a holographic gold brocade made an appearance, positively transfixing the audience in its rainbow perfection. But before that, there were layers upon layers of clothing to obsess over, most of them different variations on brocade: a blue on blue polka dot and abstract swirls of golden floss. With a packed front row that included Jenna Lyons, Mazdack Rassi (and the show wasn’t even at Milk Studios!), Eva Chen, and scores of Vogue-ettes, this young label continues to be one to watch.

Coach
Edgy, fresh, current, and exciting are words that haven’t been associated with Coach for quite some time, but times are a-changing. With Stuart Vevers at the helm, the brand is heading in a completely new direction, and it’s quite an amazing path to be on. In a dark room on West 58th Street, a handful of looks debuted amid the backdrop of a golden fall afternoon. First, let’s discuss bags. They had Coach’s DNA,  but with fresh details that compose the making of an it-bag: strategically placed chains, grommets, and functional details, in cool hues with intricately patterned leather. Then there were the shoes: shearling-lined sneakers in black and camel, for example, or scores of perfect leather booties. As for the clothing? It had a heavy Americana influence. There were thick shearlings, rounded skirts, a huge houndstooth, and the color of the moment, red. Definitely take a look at the pictures, and prepare your wish list; the goods will hit stores in September.

BCBG
With a quarter century under their belt, BCBG decided to keep it cozy for Fall 2014. But their chic girl doesn’t find the cold weather something to mope about: the colors were bright, fresh, and rather airy in contrast to February’s gloom. A draped poncho in white with hints of pale pink and blue was a standout topper, as was a cream shearling. The hemlines were also somewhat demure for the often-saucy label, with the shortest one skimming an inch or two above the knee. A black and blue leather skirt was unzipped to the knee, while wrap dresses exposed a hint of leg, too. The last few looks were evening perfection, combining a mix of tulle, sequins, fur, and the leather sweatshirt of your dreams. All in all, it’s certainly a happy anniversary for this maison.