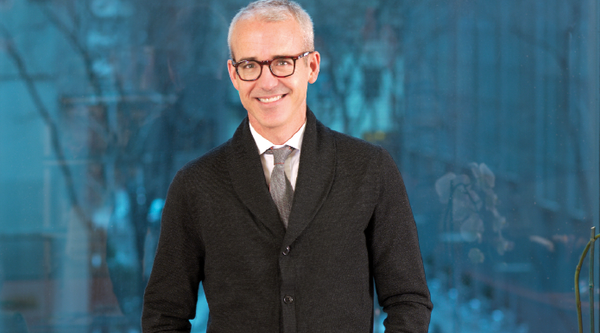 (NEW YORK) Time Inc. vet Jess Cagle was editorial director of People and Entertainment Weekly last month, a job he was born to hold. The Daily stopped by his EW office on his last day there to find out what people who need people have in store from the zestiest man alive.
BY EDDIE ROCHE

Was helming People always part of your plan?
I grew up in a little town in Texas and People was my window into the rest of the world. I got an internship in 1986 and I hounded everybody until I got a job here in 1987. As far as running it, that happened very fast so the second it was presented to me as a possibility, I got very excited. Now there’s a list of one million things I want to do.

Why do you think Time Inc. wanted you for the job?
I’m a huge fan of the magazine. I know it very well. I’ve worked there on-and-off for years. I’ve watched the magazine evolve. I was there from 2002 to 2009 when it was truly evolving into a multi-platform brand. I worked on a team with Martha Nelson and Larry Hackett to turn People.com into this massive website. I used a lot of what I learned there when I came to Entertainment Weekly. At EW, we did a lot to integrate our print and digital operations and I’m excited to integrate those changes to People. My focus is going to be looking at the core product and putting my stamp on that.

You’ve been at Time for a very long time.
[Laughs] No one else will have me, so they have to keep giving me jobs. There’s just always something happening here and they gave me the chance of a lifetime running Entertainment Weekly. And now offering me the chance to run People, which is the biggest magazine in the world. Martha Nelson and Norman Pearlstine have been my bosses and have let their employees spread their wings and exercise creativity without leaving the company to do it which has been phenomenal.

What did you have to do back in your intern days?
Essentially we were sketching cave drawings. There was no Internet so I spent my days in the library clipping newspapers. You’d scan clippings on Princess Diana and make a file. I got my first big break because I wanted to write a story and they threw me a bone with this hot new group that do this music called rap, and their name was Run-D.M.C. That’s how long ago it was. I interviewed them and the story got published.

Were you nervous when you did that interview?
Absolutely. They weren’t famous then, but it was a lot of pressure. I wasn’t doing it for the school paper, The Baylor Lariat. Run-D.M.C. will always have a special place in my heart. Captain and Tennille was the first concert I ever attended and then there’s Run-D.M.C. Ironically the most important musicians in my life.

Do you think interns now have it better being able to Google instead of going to the library to make clippings?
Absolutely, Google all the way. Now the challenge is: just because you Google it, doesn’t make it true. The skills you try to impress on young journalists is that it must be checked out. There must be a phone call. You must know what sources are generally factual and which are completely untrue—explaining that there’s a big difference between your friend’s blog and The New York Times.

What’s your direction for People going to be?
It’s still new and I have a million ideas, but some of them might be terrible. You have to find out what’s working for advertisers, the readers. One thing that Martha Nelson taught me was to learn what they like and give them more of it, to which I’d add, “And give them more of it until they are sick of it and then do something else!” I’ll focus a lot on covers and the mix of human interest and celebrity stories. We’ll continue to break big celebrity stories. We’ll also focus a lot on video.

What does your family think of your new job?
They love it. My mom back in Lubbock, Texas knows exactly what People magazine is. She’s not so down with Sons of Anarchy when they were on the cover of EW. People is America’s magazine.

You’ll still be overseeing Entertainment Weekly.
Right now I’m focusing on finding my replacement. I’ll name someone who will keep the magazine and the website’s momentum going. That’s a tough hire. It’s not broken. It’s doing really well. You want someone who can keep the momentum going. Nothing will make me happier than to read, “Thank God that Jess Cagle is gone! This new person is fantastic!” That would be my dream. I will be extremely focused on People.

Will the design look different?
There are things I want to do with the design, but I need to learn what’s working and what’s not. If you take something out, you have to know it’s the right thing. One of the things that’s happening is People is investing in significantly better paper stock, which will debut in March. You can’t do that without focusing on design. I’ll be working closely with the art director and photo editor.

Who is the reader?
I’ve been doing a lot of research on that. She’s exactly who you think she is. She is successful. She can afford the subscription. She sees herself as more plugged in and more fun than all of her friends. She’s the one who goes to a party and all of her friends want to know what she knows. She knows what TV shows, movies, and books to read. I’m excited to talk to her. That’s what appeals to me.

Are you a male version of the reader?
I have a lot in common with the People reader. I want to be entertained, delighted, and moved. It’s the morning show of magazines. It’s a package of incredibly interesting stories. Years ago, Dick Stolley, one of the founding editors, said it’s about ordinary people doing extraordinary things and extraordinary people doing ordinary things. That’s still the baseline. You want every page to wow you.

What sold well last year before you started?
The three best selling covers of last year were “Amazing Escape—3 Ohio Women Free After 10 Years,” “The Gosselins Now: Life After Reality TV,” and the “Special Collector’s Issue: Royal Baby Joy!” I wouldn’t be looking for a lot more Gosselin covers from us. There’s a limited appetite for them, but people were certainly curious from a where are they now standpoint.

What will you miss about Entertainment Weekly?
The fun was finding a movie, TV show, or book that you were passionate about. You can certainly do that in People, but it’s a different focus. EW was curating pop culture. I worked with a staff that were obsessed with pop culture. I’ll miss the conversation where we dissected a scene in Game Of Thrones.

Will the EW sense of humor come to People?
There’s room for more fun. Is there room for an infographic like the Bull’s Eye? It would be a different sensibility. You have to figure out what the sense of humor of your audience is, which is tough, but that’s something worth exploring.

There were rumors that People would go more tabloid.
That’s not true at all. It’s a silly thing to say, because I’m not seeing a tremendous amount of success out there for the tabloids so why would we want a tabloid? I’m also the last editor you’d want to be that kind of editor. I’ve got too many friends in the entertainment industry. The most important thing that People has is that it’s celebrity news that you can trust. You find yourself going to our website to find out if a story out there is true. You want the readers to be able to trust what you say. We have exclusives on celebrity babies and weddings, and that’s been an enormous part of our success so we wouldn’t want to jeopardize that. We gain nothing by going in that direction.

One of your “side jobs” is being on the red carpet Oscars night for ABC. How has that been?
The fantastic thing is that it’s all pre-booked. I’ve done Oscar red carpets in the past for other TV shows and you’re chasing people down while shouting at them to come over. But the great thing with this is that all the nominees are there to play ball. And you’re in the middle of that red carpet on Oscar night. It’s the one time you feel like you are truly in the center of the universe. It’s incredibly exciting.

Does any star make you nervous when you’re interviewing them?
Mickey Rourke. Anybody that you think might hit you makes you nervous. Any actress that’s taller than me in heels makes me nervous, because I know that people online at home are going to be vicious about it.

Is there anybody that you would still like to chat with?
President Obama. And I’d like to sit down with Vladimir Putin. Doing interviews with the president of Russia is probably not in the cards for me at this stage in the game. The great thing about doing most celebrities now, is that whether they remember me or not, it’s not so intimidating. You know what to expect. You know what you should ask and what you shouldn’t.

How are you sleeping these days?
I just started sleeping. I didn’t sleep for most of last month. The million things at People that I want to do have  been keeping me awake.

On The Tube! With Cindi Leive