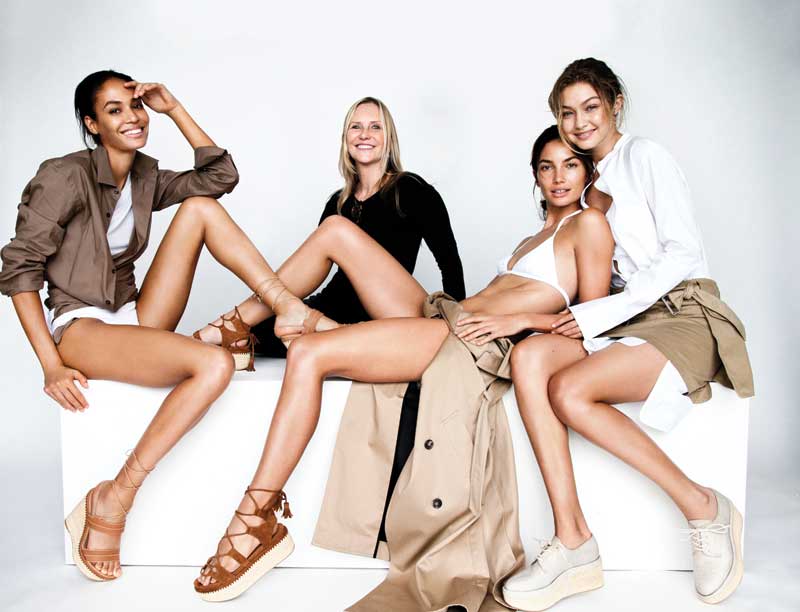 Stuart Weitzman’s campaigns are instantly recognizable: The clean black-and-white portraits by Mario Testino, combined with the world’s biggest supermodels, have been a winning formula for the brand. How do you follow Kate Moss and Gisele? With the next gen of fashion’s most in-demand beauties, Gigi Hadid, Lily Aldridge, and Joan Smalls, in shoes and nothing else! CMO Susan Duffy dishes on the divine inspiration.

Congrats on the major new campaign!
I think there are probably three words for it: sexy, sexier, and sexiest.

What made you decide to go with three women this season?
It’s a constant evolution for our brand that we’re trying to orchestrate. In terms of our global advertising, we raise the bar pretty high for ourselves. First we had Kate the Great, and then we entered the age of Gieselegance—we used Gisele for three seasons. It’s pretty tough to step into those shoes and continue to evolve the brand’s story. I think we all know we’re in an era of sensory overload, so for us, it was about, How do we break through? How do we make women push the pause button to stop and take a look in this sea of fashion advertising? We spent hours and hours looking at which girls out there were really standing out.

How did you make your final decision?
For us, they represent the new generation of supermodels. It was also really wonderful that Gigi and Lily are actually best friends. Gigi is pretty incredible—I think she’s up to 13 million followers on Instagram. Joan has well over a million. Lily has over three million. It’s a delightful mix of personalities and that special presence that they each bring to the campaign. Lily is a model and a mother, and she’s married to a rock star. Joan was the first Latina model to be signed as the face of Estée Lauder’s global marketing campaign, and Gigi has just done so much in her almost 21 years. Frankly, all of them are true to the Stuart Weitzman DNA in that they are all just really nice girls.

Was their social media presence a big factor in casting?
Absolutely. Social media has become an intrinsic part of everyone’s media mix. We wanted to be able to communicate on Instagram and Facebook and launch WeChat. We need to be everywhere that our client is today. Our marketing plan is a dynamic mix of print and core fashion publications, and the brand is visible on key billboards in the most fashionable places, like the Sunset Strip in L.A. and in Soho in New York—we’re in Paris, Milan, and Asia.

How long does it take to plan a campaign like this?
We started the process of who would be the face of the brand last March or April. At that time, Gigi had 4 million followers, and today, she’s already at 13 million. That’s a huge leap. For us, it’s about creating a next-generation brand. What Stuart has done so successfully with his iconic style is to attract a multigenerational clientele. Right now, we have clients in their twenties, thirties, forties, fifties, and beyond who are rocking our style. The Nudist is the prefect example of this.

Was it hard to coordinate schedules?
You know, it wasn’t! But it wasn’t only the girls—it was trying to coordinate with Mario Testino’s schedule, too. The friendships among Gigi, Lily, and Joan really worked in our favor, because the minute Lily knew she got the campaign, she texted Gigi and said, “This is going to be the best day ever!” It was the first time that Lily and Joan had worked together, but they are also friends; they were all so excited to be doing the campaign. When everyone is 100 percent on board, it makes life so much easier.

You went for a shorter heel this time.
We’ve taken it from the Nudist in the stiletto that Stuart launched two years ago to different heel heights to this contemporary block heel featured in the campaign. Stuart is all about being fashion-forward and right for the time. He’s always brilliantly been able to mix high heels with flats. The 50/50 boot, which is the perfect example of that, has sold 1.5 million units worldwide. Our Lowland boot has also been seen on every single celebrity and cultural influencer worldwide, and that’s also available in a higher heel called our Highland. Stuart has really owned the over-the-knee silhouette.

Are you ever tempted to stray from the black-and-white aesthetic?
While it’s tempting, I think it takes the ultimate discipline to be laser-focused and to stay on track once you’ve chosen that aesthetic. There are ways to bring freshness and innovation through other avenues in the marketing mix. When we first did the campaign, we were the only shoe brand to do a black-and-white campaign. What we’ve really been able to do is own that messaging.

What is it like to work with Mario Testino?
Stuart hired me five years ago in April, so one of my first moves was to hire Mario Testino. We really felt like he could capture our story in a visually arresting way. He’s really able to tell our brand story, which is that they’re the first thing you put on in the morning and the last thing you take off at night. When you look at our photography, you see the beautiful girls, you look at their beautiful faces and then you go to look at the incredible shoes that they’re wearing. It’s about the shoes ultimately—we’ve really stripped everything else away.

To put it lightly!
[Laughs] Yes, especially this season. But we have a distinct minimalist aesthetic, and it’s a powerful way of showcasing Stuart’s incredible silhouettes.

What was the inspiration for the nude image?
With this trio of goddesses, we really looked to Greek mythology’s Three Graces—they have been immortalized by many artists, such as Raphael and Botticelli. We looked to one artist, Antonio Canova, who portrayed them in a statue. We had a couple of different ideas, but sometimes you get on set and something really works. It’s magic, and you know it’s the one. Magic happens when you’re with Mario.

How do you choose the shoes for the campaign?
The process should be televised! It is the most difficult part of our job to select our favorite children from a collection of more than 500. In this case, having three models allowed us to showcase even more shoes than we would normally. We always try to have a balance between what is cutting edge, fashion-forward, and styles that represent iconic Stuart styles, but that are fresh at the moment.

What are your favorite shoes this season?
I like the Nearly Nude and the Grandiose bootie, and the Romanesque, which I’ll be taking to St. Barths with me in May. The funny thing about being the CMO of the brand is that ultimately, it’s not a democracy! A few of my favorites are always represented or play a prominent role. [Laughs]

How will you top this campaign next season?
It makes us nervous! But we’re already thinking about what’s next.

I find the new Stuart Weitzman nude trio ad very offensive. I feel you have stepped across the line of integrity.

For decades Stuart Weitzman appealed to generations of women – from fashionable girls in their 20’s to their stylish grandmothers. He has an eye for fashion and quality at fair prices that no one else possessed. EVERY stylish urban woman owned at least one pair of his shoes. Many of us owned dozens. Every since the company started using the top models his prices have risen hundreds of dollars per pair to pay for the shoots and ads. A waste of company money, and the customer loses. We already know that Stuart does it better than anyone – or used to. Before, he had no competition as no one offered fashion, quality, and comfort at a fair price. Now he’s competing with Blahnik, Choo and Louboutin, and he probably sells more on sale than at full retail than in the past. We don’t like paying 200 – 250 more for a pair of pumps to support Testino and the girls.
Get rid of the overpriced ad campaigns, and bring the prices back down to normal levels and the regular priced business will come back.