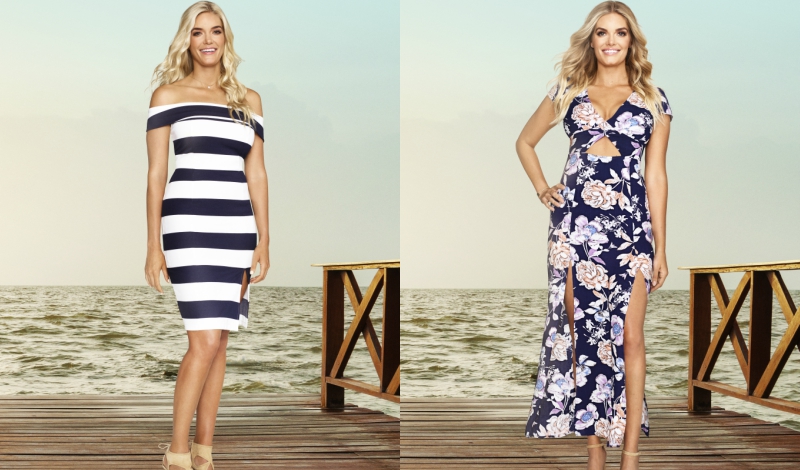 What happens when nine attractive, successful, and strong personalities live together in a Hamptons share-house all summer long? Bravo’s new reality show Summer House sheds light on just that. We caught up with two stars of the new series, twins Ashley and Lauren Wirkus, who gave us a taste of the hautness and addicting drama.

Lauren, how did you and your sister end up on Summer House?
Lauren: A mutual friend of ours saw through social media that we had been going to the Hamptons with our friends over the summer. It evolved into us being connected [with the show] and another cast member, Kyle [Cooke], got connected, too. It’s funny because what we do [on the show] is no different from our normal lives. We’ve been going to the Hamptons for the past six summers.

Tell us a little bit about yourselves!
Ashley: Lauren and I are identical twins. We are originally from Southern California. Shortly after college, we went to UCD and then moved to New York to take an internship with Daymond John from Shark Tank. We both had finance backgrounds and studied e-con in college, so we decided to pursue that. I was working for a real estate developer in the city for the past five-and-a-half years, and Lauren has been working in finance at an equity firm. I’m now living in California with my husband since he moved there for work, but I decided to stay all through last summer because it was my last summer working here and I wasn’t willing to be away from my sister just yet! We have never lived apart in our 29 years.

You both also have a fashion blog.
Lauren: Yes, Ashley and I have always been into fashion—about a year-and-a-half ago, after all of our friends constantly asked us, ‘Where did you get that?’ we decided to start a blog to share our twin tips with people. It’s more of a passion project, since our day-to-day jobs aren’t that creative. We post what we love to wear, places we travel, and things we find.

What was the dynamic like in the house?
Lauren: We have never done a full summer share in one house—more like a month at a time in different houses. For the past six years, we have stayed in a house with five to 10 people at a time, depending on the size of the house. It’s a lot more fun than staying at a hotel, since most of the fun stuff in the summer are times spent in a house with your friends. You just don’t get that same camaraderie anywhere else.
Ashley: Everyone that’s on the show is friends. Lauren and I had been friends with Cristina [Gibson] since we moved to New York. Through Cristina we met Lindsay [Hubbard], and both of them were at my wedding. We have done summer houses with them every year and spent many weekends with them in the Hamptons, but we are also very close in the city. Kyle is a group friend of ours. The only person who didn’t know the group was Carl [Radke], but he is a mutual friend of many of our other friends. So we are all acquainted with each other…no strangers!
Lauren: We definitely did not post a Craigslist ad asking for a roommate in our summer house!

Who was the most difficult person to live with?
Lauren: Ashley and I would probably say each other, just because we get on each others’ nerves and we shared a room. We’re sisters so we’ll fight and make up. At times it was difficult to be in the house, but living with people when they are your friends just for the weekend at a summer house is not that difficult. Life isn’t bad.

Who was the messiest?
Lauren: Ashley and I are OCD to a fault. I think I take on the motherly role and end up cleaning up after other people, just because I can’t hold people to the same standards as me.
Ashley: Some of the boys were messy.
Lauren: Yes, Kyle likes to enjoy a late-night snack when he drinks, and unfortunately I don’t think any of those late-night snacks ever made it into his mouth—they were usually on the floor or on the counter when we woke up in the morning. Nothing was put away. Cheese can’t be left on the counter all night,  and you can’t put a banana in the freezer with the full peel on. It’s like, come on guys!

What’s Kyle’s reputation?
Lauren: I think people are going to fall in love with Kyle. One of the best things about Kyle is that he has no filter, and he doesn’t care about what you think of him. It’s endearing when you see a person who knows they are the idiot and they just own it. Kyle has a very fun personality; he is literally a life-size Ken doll, with a personality to match.

You all seem pretty fit for reality TV!
Lauren: I don’t think we ever thought, ‘Oh, we are going to put our lives in front of cameras and millions of people.’ But we sort of had been told our whole lives that we would be great on a reality TV show. We decided that we all have some unique stories to tell, so why not? Let people see this great part of the East Coast and what the summer culture is like.

Do you ever visit Montauk off-season?
Ashley: The only time we’ve really gone out there in the winter has been to look at houses.
Lauren: It is pretty funny when we go looking for our summer house in the snow, wearing snow boots.

How do you guys typically get to the Hamptons?
Ashley: It depends on the weekend. The train is definitely the most efficient way if you’re not taking a helicopter—we’re not fortune enough to do that every weekend. We would rather buy clothes than spend $1,000 on Blade. We typically like to drive.

Lauren, what’s the worst share-house memory you have?
Lauren: The time we were in a house where there were no toilets. Basically, even when our rental was over, we decided to throw a party and the toilets weren’t functioning. We could not get a plumber to come out, so literally toilets were overflowing because people would go on top of what was in the toilet. We were basically in a Porta-Potty. It was horrific.

What’s the plan for next summer?
Lauren: We’re at the time when we [usually] start looking for another summer house. We loved our house last summer, but sometimes we like to mix it up. It’s kind of up in the air. We need to get the group together and figure it out!
Ashley: We are definitely going to have a house.

Vetements Fall 2017: The Comedy of ‘Stereotypes’