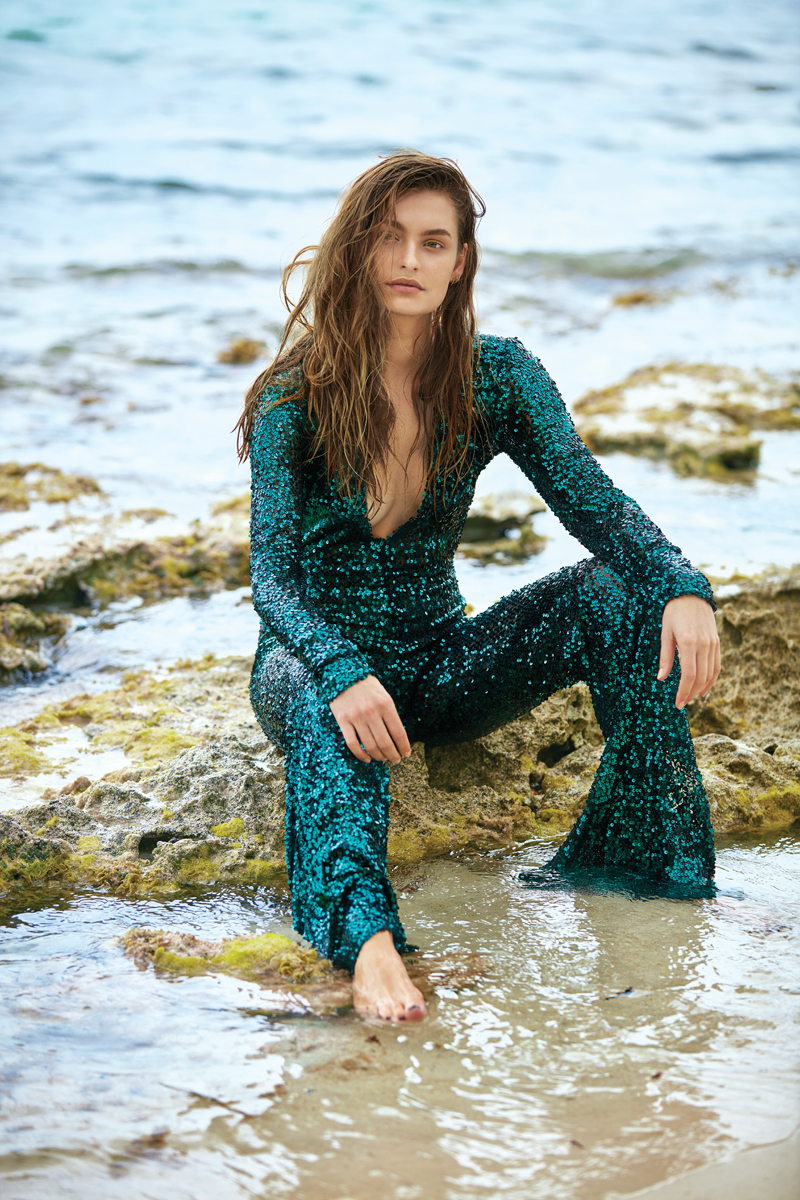 Remember this name: Roosmarijn De Kok. We sat down with the 21-year-old Dutch native and Wilhelmina stunner to talk career goals, boys, and her take on those Gigi Hadid comparisons.

How do you pronounce your name?
It’s basically the Dutch version of Rosemary: Rose-Maren. When I introduce myself, I always say Rose. People also call me Rosie and Roosy.

What’s your preferred name?
I used to hate it when people called me Roos, but now I think it’s kind of cool, because nobody else has that name!

You’re also this much closer to being a kangaroo!
Exactly!

Where were you discovered?
At a birthday party. Another guest was a model, and he said I should look into it. He took a picture of me and sent it to Wilhelmina, and they saw it and wanted me to come to New York to sign me. I had planned to go to university after high school, so I looked at this as a gap year. Three years later, I’m still here!

What were you going to major in?
Economics and business. I really wanted to be an accountant. I like numbers. Math is my favorite. Whenever I go out to eat with my friends, I’m in charge with figuring out the tip amount!

What was it like growing up in Holland?
So different! I grew up in a small village with 2,000 people and one supermarket. Everyone knows everyone. But I love living in America.

Were you like Belle in Beauty and the Beast?
Kind of! It was very cute. Growing up, my backyard was the woods!

They also make pretty babies!
There are a lot of Dutch models! Dutch people are the tallest in the world! It’s proven.

What have you been up to this summer?
I went to the Hamptons for Memorial Day weekend. We ate good food, laid by the pool, and went kayaking, which didn’t go so well. I fell into the water and scratched my knee.

Where did you go out to eat?
The American Hotel. The duck there is really good! We also went to the Surf Lodge. We had the large seafood platter, which was so delicious. It’s funny to see the difference between Sag Harbor and Montauk. We also had a bonfire on the beach, and the staff cooked us lobster and seafood. I made s’mores for the first time. My favorite dessert in the city is s’mores pizza from Catch.

What were your summers like as a kid?
We always went camping and visited places like France, Spain, and Italy. I never realized how close everything is from Holland. You can drive anywhere from there.

What were you like as a child?
I’m shy when you first meet me. I need a little time to warm up to people, but I’m much more outgoing once you get to know me. I loved reading and doing math. I wasn’t what you would call a nerd, because I was still social. My most favorite thing was to hang out with my friends. School was really important to me.

Will you go back to get a degree?
I can’t model forever, so eventually, I’ll go back. But I’m not in a hurry.

A lot of people are comparing you to Gigi Hadid.
I’ve gotten that often; I don’t see it! But her mom is Dutch, so that might be where it comes from.

Do you have a boyfriend?
No!

What do you look for in a guy?
Tall, dark, and handsome.

You and everybody else!
I know! Personality is really important. I don’t really care about looks. Our industry is so superficial, so I want someone who is kind and cares about the world.

Does it matter if he’s good at math?
He can be bad at math. I’ll do all the math!

What else did the fortune-teller say?
That I’m going to have a good career, but I don’t take it too seriously.

What are your fashion goals?
I’d like to walk the Victoria’s Secret Fashion Show and Chanel. They’re both so different. I work a lot with VS, and it’s all about personality. I love working with them—they want you to be who you are.

Do you like being a model?
For the most part. I love that I get to travel so much, although sometimes I wish I was closer to Holland. My mom wants me to send her a message every day so she knows I’m alive!

Which models do you look up to?
Doutzen Kroes. She’s from Holland and she’s a great person. I don’t know her personally, but she seems like a great mom and she does a lot for charity.

Do you want to become famous?
Not really.

That’s refreshing. Why not?
I don’t care about fame. I just want to be surrounded by people I love.

I am model
Live in Iran
Insta:keyvan.azad