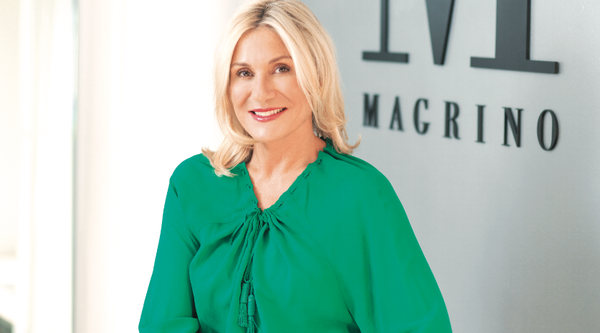 (NEW YORK) Another juicy must-read you may have missed during the flurry of NYFW shows, darlings. Since starting her eponymous boutique PR agency 21 years ago, Susan Magrino has worked with an enviable klatch of clients, from luxe resorts and libations to Oprah—plus, she’s been in Martha’s inner circle for three decades! What moves her? A dizzying YSL collection, for starters…BY ALEXANDRA ILYASHOV

So give us your backstory, Susan.
I majored in English at Skidmore College, then began my career at Crown Publishing in the publicity department. I spent nine years there and really loved it.

Who were the major clients at the time?
Martha Stewart was one of the first authors at Crown! I’ve worked with her for 30 years now. She’s a wonderful mentor; when she sees talent, she really nurtures it.

Did she give you any specific advice?
When I was starting my own agency in 1992 with my sister, Allyn, I was so afraid to tell Martha. I don’t think I even told my bosses at Crown yet. I thought she might be upset I was leaving, but the first thing she said was, “That’s great, go do it. How can I help you? What do you need?” She started her magazine within a year and became one of my agency’s very first clients.

Why did you go out on your own?
I felt very entrepreneurial! Everyone gets those callings in life—that was definitely my moment. For the most part, I am the master to my own destiny.

What’s it like working with your sister?
We know each other’s strengths and weaknesses, and that balances nicely.

Is there ever any bickering?
You’d have to ask everybody else!

Who were your other big clients early on?
I met Chris Blackwell at a book fair in Miami. He’d started all these Art Deco District hotels, and that’s how we got into hospitality. Then I met Frédéric Fekkai, which led us into beauty, starting with his salon at Bergdorf’s.

What about today?
Baccarat, The Pierre, The Fontainebleau in Miami, lots of spirits…

How about the resto scene?
I met Richie Notar back in his Ian Schrager days, then he did Nobu and launched his own hospitality company, plus Harlow. We’ve worked with the Maccionis for a long time, at Le Cirque and at Sirio, at The Pierre.

Tell us about using your name for the biz.
The name of the agency remains the same, but we’ve evolved our logo to be “M Magrino.” If I had to do it again, I think I’d just do Magrino. People should feel that the principal figure has her eyes and ears on the project, but you also have to be realistic. You can no longer do everything!

Do you stay busy on the event circuit?
Trying new things and restaurants is a big part of this business. Travel is important, too. When I was in Europe this summer, I stayed at some great hotels and noticed different touches: the turndown service, who’s gone digital with everything, if they’re ironing linen napkins. And I’m sorry: No matter what anyone says, the French maids at the Bristol look amazing!

How did you get involved with O, The Oprah Magazine, for its launch?
Hearst felt we understood the personality business. Martha’s done 10 to 15 segments with Oprah, so I’ve been fortunate to have a fair amount of access to her, and Gayle [King].

What’s Oprah like?
She’s so real, so professional, and she treats her team so well.

How’d the media focus on Martha’s love life come about?
When we did that two-part interview for the Today show with Matt Lauer, he asked who she was dating, and Martha said she was thinking about Match.com. That was how that whole thing started. People think we set that up! I have to give Martha credit. The fact that no one had heard her talk about it before made it really interesting.

But it really wasn’t intentional?
No! Matt asked the questions and then he picked up on it. Good work, Matt!

How do you deal with being the “no comment”–bearing bad cop?
We’ve come a long way in the red carpet–media relationship. The press needs content, the celebrities need to promote something. Obviously there have been some tricky situations of individuals being in the spotlight at the worst time, but politicians seem not to worry about it every day! There are times I just tell my clients to lie low.

What do you look for when hiring?
I’m looking for people who are interested and interesting. People with character, who are characters, but can also answer the bell. You can have a look and a shtick, but at the end of the day, are you really talented? Do you know how to drive revenue? I like quirky, but I wouldn’t say were a quirky agency. At all.

What’s the Magrino house style when it comes to doing PR?
We pride ourselves on the quality and sophistication of our work. We’re buttoned up. It isn’t loosey-goosey. You need to be in the office at 9 a.m., even the day after a party. We often have clients who say, “We’re ready for you now.”

What’s it like working on fashion accounts from a PR perspective?
Fashion is very competitive and requires a lot of capital and talent. If you’re an editorial darling, how do you make that into a business?

What’s your fashion forte?
I love Saint Laurent from all the different designers. I loved it when it was Yves, Tom Ford, and Stefano Pilati.

What are your feelings on Hedi Slimane’s take on the storied label?
I’ve been trying to buy as much of it as I can! It’s very hard to get here; in Europe, it was more available. Because Hedi’s living in L.A., he’s really connecting with American shoppers. When I went to the Cannes film festival with Martha, I got all this stuff! I’ve found great pieces at the Lanvin store in St.  Tropez, too.

If you weren’t a PR maven, what would you be doing?
I’d be an art dealer or in real estate. I have a list of other careers. The memo section of my Blackberry has a whole list of plans in it!